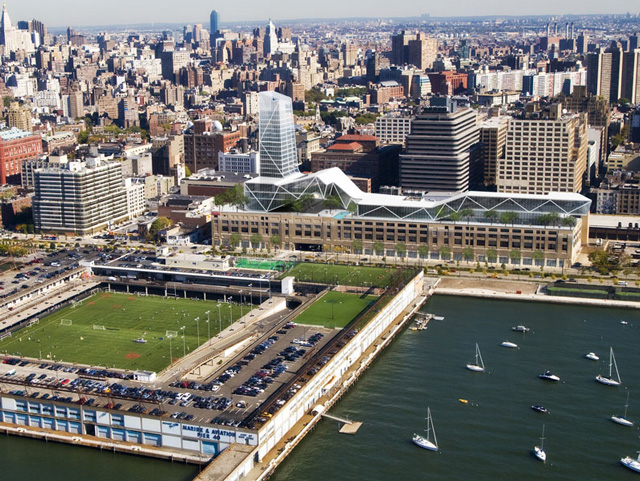 While Pier 40 continues to sink into the Hudson River, renderings have surfaced over at TEN Arquitectos depicting the possibility of re-developing the St. John’s Terminal Building with a rooftop hotel. Curbed recently discussed the site’s potential, though plans may be geared towards razing rather than rehabilitating the vestigial structure, and the post presented another stunning vision for the site, by Annabelle Selldorf. The New York Post reported on the site’s sale in 2013, when 550 Washington was bought-out by a partnership consisting of Fortress Investment Group, Atlas Capital Group, and Westbrook Partners. The existing Terminal spans 1.281 million square feet — with the largest office floor-plates of any building in New York City — while air rights currently amount to 290,000 square feet.

TEN Arquitectos’ plan for the Terminal Building is definitely ambitious, and presents an exciting opportunity for the neighborhood. The old building is hulking and enormous, and while it is not completely unattractive, its monolithic monotony is a barrier to the riverfront, and a blight on what should be a vibrant and pedestrian-friendly section of its ‘Hudson Square’ surrounds.

Thus, the potential for 550 Washington is enormous, which the renderings from TEN Arquitectos make clear. Enrique Norten’s vision for the expansion presents an undulating addition that is very distinct from the Terminal underneath, peaking with a new tower that would rise approximately 20 floors above the existing structure. In the firm’s own words, the “new building was thought as a [Chacmool] which is a pre-Columbian Mesoamerican sculpture of a human figure semi-leaning on a heavy and solid slab,” and the inspiration is very apparent in the rendered design. TEN Arquitectos’ program for the site would be entirely commercial, adding restaurants and a conference center in addition to the hotel space. The conceptual plan is impressive in its own right, but something that better utilized the site — eliminating the super-block in the process — would be most beneficial to the surrounding neighborhood. Granting the developers of 550 Washington Street additional air rights to save Pier 40 would be in everyone’s best interest, especially if the Terminal’s re-construction can incorporate a variety of uses, as the real estate it sits on is extremely valuable and should be put to a higher and better use. The TEN Arquitectos scheme for ‘Hotel 550 Washington’ will likely remain unbuilt, though the site’s potential is definitely real — and regardless of whether the developers can secure additional air rights, future plans already have 290,000 square feet to work with.