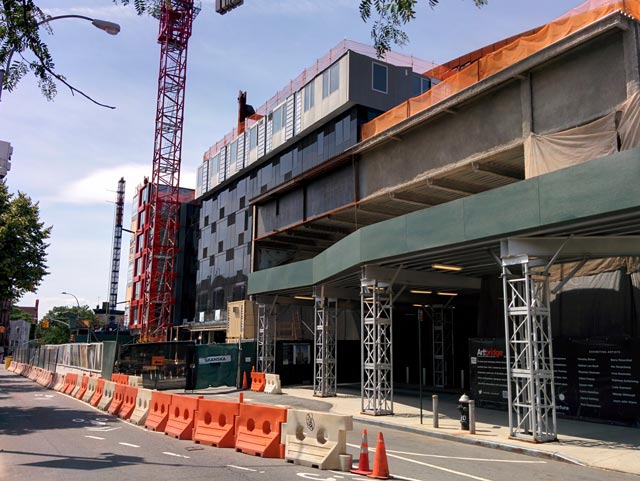 After significant delays, reader-submitted photos show that construction appears to be picking up at the first Atlantic Yards residential tower, dubbed B2. The structure was designed by SHoP, and Forest City Ratner is developing.

The B2 Tower will total 32 floors and 363 units, becoming the first component of a much larger project that will completely transform the surrounding neighborhood. Barclays Center was a notable and significant first step in the revitalization of Atlantic Yards, and filling out the area with actual housing will further enhance an area that has long been dominated by open rail-yards. While pre-fab housing has its challenges, Greenland Holding Company’s 70% stake in the project shows investors’ confidence in Forest City Ratner’s vision for the site, which will eventually have over fifteen buildings, possibly including office towers.

B2 is now at its seventh level, and the variegation of both form and facade is becoming evident; the tower will have several different colors, and bulk will be massed in several different components, stacked on top of one another. While progress has been fleeting, the structure finally appears to be rising at a slightly more regular rhythm. Delays have been due to problems with on-site assembly, and per The New York Times, Forest City will be switching to traditional construction methods for three more towers set to rise later this year, which will add an additional 900 units to the site. Completion of B2 is expected in 2015, and the entirety of Atlantic Yards should be built-out by the 2020s.