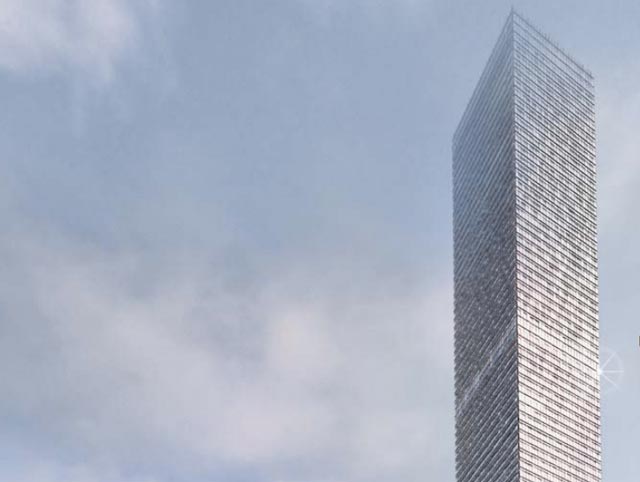 Preliminary renderings are up for Silverstein’s 520 West 41st Street via the project’s draft Environmental Impact Statement, which affirm the building’s status as one of the largest in Manhattan, given it will stand 1,100 feet tall. More impressive is the actual floor-count of approximately 106, which will surpass all other skyscrapers on the island. Massing diagram, via the draft EIS

The development’s scope is going to be a game-changer for the far West Side, and the massive injection of new retail space — totaling 300,000 square feet, if current plans are approved — would be a catalyst for walkability. The EIS notes that 520 West 41st Street will also include 175,000 square feet for corporate apartments, as well as 1.14 million square feet of residential space — split between 1,400 apartments — for a gross of 1.685 million square feet. While the height of 520 West 41st Street will be impressive, the most notable aspect of the tower is its sheer size, which also presents a turning point New York development has long needed: as ‘supertall’ technology continues to advance, buildings of 1,000’+ will no longer be restricted to the uber-rich. This means that mass-market towers that cater to all demographics are on the near-horizon, yielding new opportunities for satiating demand, and constructing supply where it is most needed.

While all-super-luxe skyscrapers are not a bad thing, the scope of Silverstein’s tower proves that 1,000’+ buildings can help solve the affordability crisis.

With approximately 106 levels, the ‘floor-count’ at 520 West 41st Street will be unprecedented amongst residential towers in the United States. The development will also have the most apartments of any building in New York City. Alternate visions for the site presented attractive and forward-thinking possibilities, but the EIS scoping documents push the kind of density and verticality that Manhattan sorely needs. The site is just a short walk from 10th Avenue and 41st Street, which was supposed to hold a station for the 7-line extension, begging the question of that improvement’s ultimate completion. Funding was apparently lacking, and while the full build-out of the platform was cancelled, awarding nearby developers additional FAR in exchange for cash to complete the project should be considered; as-is, the far West Side is two long blocks removed from subway access.

Construction on 520 West 41st Street is tentatively slated for 2017, and completion is expected by 2020. The building will open its doors to a West Side that is significantly more attractive than today, and the view to the site’s south will be unrecognizable, as the entire first phase of Related’s Hudson Yards will be complete — in addition to projects like 3 Hudson Boulevard, and developments that have not yet been announced.

Buildings like Silverstein’s proposal at 520 West 41st Street are precisely what New York City needs, and by building taller, denser, and to 21st-Century standards, developers will ultimately be able to meet the needs of city residents.