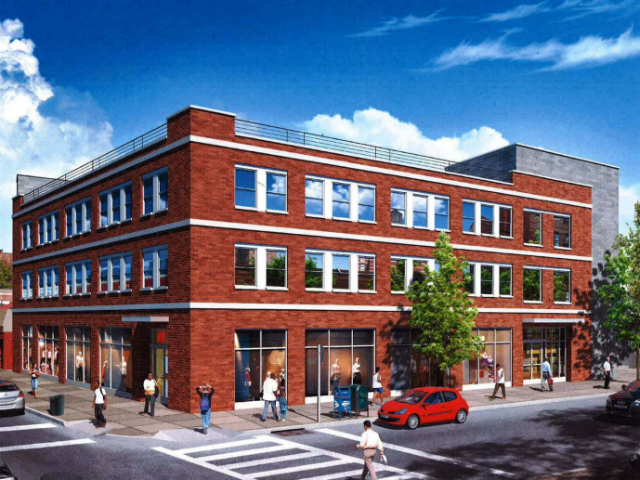 In the Richmond Hill section of Queens, just to the east of downtown Jamaica, Maddd Equities is building a three-story commercial building at 115-02 Jamaica Avenue, designed by Aufgang Architects and scheduled to be completed later this year.

The Floral Park-based developer is capitalizing on the growing demand for retail in the area, as the Asian population in and around Jamaica booms; South Asians in particular are carving up single-family houses in Richmond Hill, and driving up the population density and potential shopper base.

While small ethnic businesses tend to only be able to afford older retail space, larger chains can pay the higher prices necessary for new construction, and the three-story, 30,000-square foot retail building at 115-02 Jamaica will cater to them. The ground floor has already been pre-leased already to a Dollar Tree, and a Crunch Fitness will take the top two floors.

The rendering depicts a traditional brick design with some simple masonry touches – imitative of pre-war styles, though with cleaner and more modern embellishments. The old bank building on the site (which the developer picked up in 2012 for just under $1 million) was attractive, but the community ultimately needs room to grow, and the prewar structure had to go.

As Harvard economist Ed Glaeser has argued, when an attractive old building is torn down, preservationists “should logically demand that its replacement be as tall as possible,” so as to take as much pressure as possible off of the pretty old buildings that are still left.