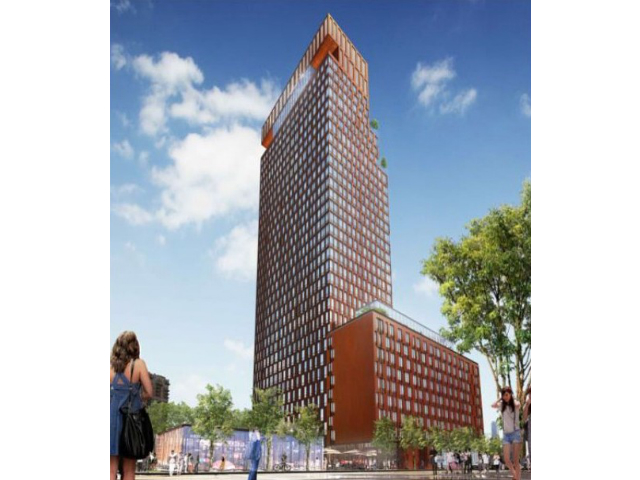 Last month, YIMBY brought you news of permits filed for a major new mixed-use project on the northern tip of downtown Brooklyn.

While the marketing address of the development hasn’t yet been pinned down – we’ve seen 120 Nassau Street, 199 Jay Street, 203 Jay and 213 Jay – we have obtained a rendering depicting a building planned for the site, with a design by the Australian-born international design firm Woods Bagot.

The dominant color is brownish-red, and in the rendering, it appears similar to the rust-like color that was so well-received at Barclays Center, on the other side of downtown Brooklyn. The structure has a bulky base which then sets back after about 10 floors, and the top of the building sports a modernist crown, part of which is cantilevered over the rest of the tower.

The rendering shows about as many floors as the permit indicated (32), and it would, according to the application, rise 425 feet, and contain 381 apartments and 119 hotel rooms. (Given that the filing only indicates 230,355 square feet of residential floor space, we doubt that it will ultimately hold that many housing units.)

Text that went along with the rendering said that the apartments would be rentals (though, mercifully, we see no PTAC units marring the façade – perhaps the builder is taking a cue from TF Cornerstone?), and that the tower would contain an eight-floor hotel and a single-floor commercial tenant, plus community and common space, consistent with the permit’s indication of 58,309 square feet of commercial space and 1,756 square feet reserved for community facilities. 213 Jay Street, before the demolition of No. 199; overhead shot from Bing Maps

The tower will be an enormous upgrade for the area, whose urban fabric was ripped apart by Robert Moses. This corner of downtown Brooklyn is forlorn and strewn with pedestrian-hostile empty lots, useless towers-in-a-park open space and elevated highways, and development – especially a tower as attractive as the one Woods Bagot appears to have designed – would be an improvement. The building should fill nearly the whole block, bounded by Nassau, Jay and Concord Streets.

AmTrust Realty, the project’s developer, did not return YIMBY’s request for comment.