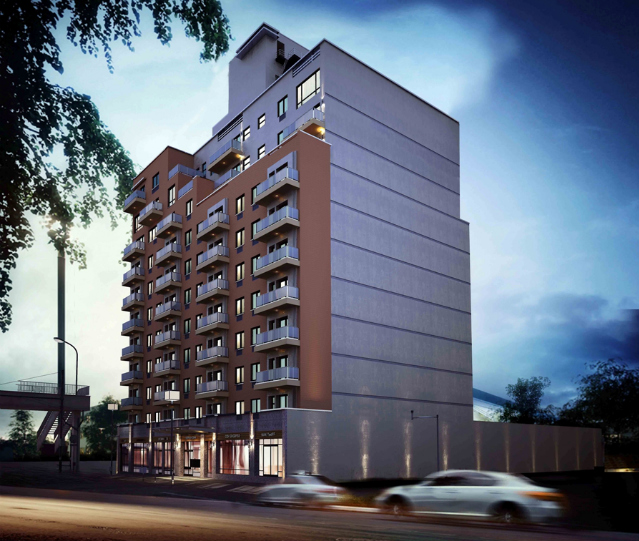 As Queens’s Chinese population has sprawled in all directions out of Flushing, developers from the community have followed. Elmhurst and Woodside are the western outpost of the borough’s new mega-Chinatown, and now they’ve got a new 11-story building to prove it.

The new 69-unit residential building at 70-32 Queens Boulevard, in Elmhurst, is being designed by Flushing-based architect Michael Kang. It will include about 55,000 square feet of residential space, with all apartments around 800 square feet in size. In most of the city this would mean rentals, but these will simply be small condos, as is common in New York’s Chinese neighborhoods.

The building includes 5,500 square feet of commercial space on the ground floor and a small 180-square foot community facility, topped by condos with balconies and an asymmetrical rooftop setback to form penthouse terraces. The parking garage will have room for 59 cars.

Steve Cheung, based in nearby Bayside, is the developer, and bought the land in early 2011 for $1.8 million, or just $33 per buildable square foot. About a quarter of the project’s cost was borne by EB-5 investors, likely from China. These backers make job-producing investments (10 per visa is the requirement) in the United States in exchange for green cards, and have been tapped for financing on projects as large as Atlantic Yards in Brooklyn and Hudson Yards on Manhattan’s Far West Side.

The project was made possible by a 2006 rezoning, which enabled apartment buildings of up to 125 feet with ground-floor retail to rise along Queens Boulevard, between 50th and 73rd Streets, where barely anything was allowed before. While this change was welcome, an artery as wide as Queens Boulevard could easily support towers of twice the size or more, compensating for the systemic restriction on development in the borough’s interior residential neighborhoods.

Construction of 70-32 Queens Boulevard is already underway, and should wrap up about a year from now.