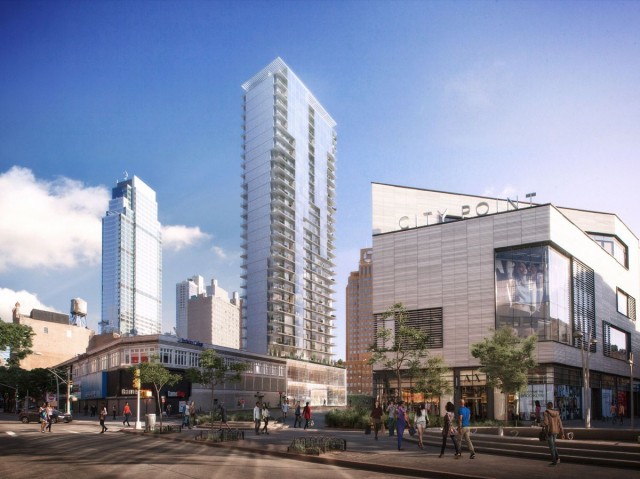 In June, YIMBY brought you news of a permit filing for a 28-story tower at 436 Albee Square in downtown Brooklyn, designed by increasingly prolific ODA Architecture. Now, we have obtained a rendering of the project, which is planned to sit on a mid-block site on Gold Street, across from the rising City Point project.

Boxy protrusions – Eran Chen’s favorite edgy design flourish, evident at 22-22 Jackson Avenue and recently revealed 134 Vanderbilt Avenue, among others – are absent from 436 Albee Square. The tower is instead marked by a glassy façade indented asymmetrically by balconies, giving it the look of a boxy, pixelated version of Jeanne Gang’s Aqua tower in Chicago.

The building is planned to have 150 apartments spread across nearly 120,000 square feet of residential space, for a modest average apartment size of 800 square feet, suggesting rentals. The tower will also include three stories and 24,000 square feet of retail at its base – a substantial amount of space, but a drop in the bucket compared to the 700,000 square feet under construction at the City Point mega-development.

If built, ODA’s 436 Albee Square will become part of a growing skyscraper cluster in this corner of downtown Brooklyn, thickening a somewhat patchy skyline. When the building begins to rise, the twin-towered (so far) 19- and 30-story City Point project should be completed. And those two developments will be dwarfed by the massive 65-story JEMB-developed, SLCE-designed project planned for 420 Albee Square, right next door on Gold Street, not to mention the third phase of City Point. Demolition permits for the two remaining three-story structures on the site were filed in September, and permits list the owner as Albee Square LLC, with Yoel Schwimer as the owner’s representative.