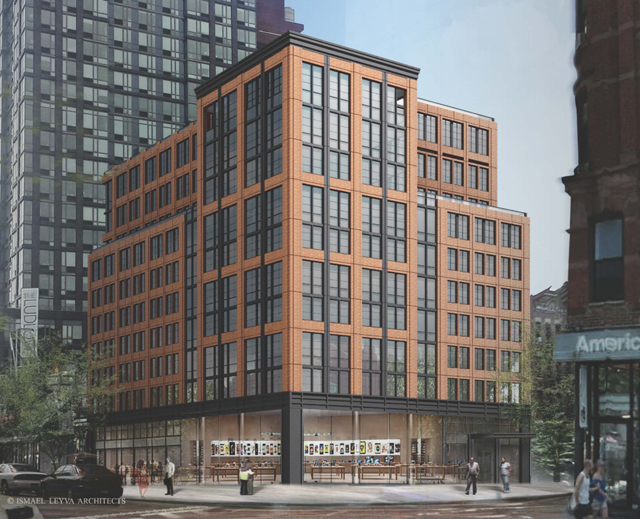 Back in November, YIMBY posted about the first permits to be filed for a new 10-story residential development coming to 196 Orchard Street, on the Lower East Side. The site is located next to Katz Deli on the corner of East Houston Street, and Bowery Boogie previously reported on the complex amalgamation of air rights (as well as demo permits filed yesterday).

Now, YIMBY has the reveal for the new building, which is being designed by Ismael Leyva Architects and developed by Magnum Real Estate Group. Standing 120 feet tall, the structure will actually be shorter than many of the towers in the vicinity, but it is another component in a development boom that is entering a fever pitch across the Lower East Side.

Like other neighborhoods across Manhattan and Brooklyn, limitations on density and widespread landmarking have led to prices spiraling upwards across the Lower East Side, and a lack of necessary new construction means that almost all of these units end up being extremely expensive (without sufficient volume to filter down in any significant quantity). 196 Orchard Street will fall under this category, with 83 total units spreading over 95,000 square feet of space.

Projects that will hit similar price-points include the nearby 215 Chrystie Street, designed by Herzog and de Meuron and revealed by YIMBY last year, as well as 204 Forsyth Street, designed by Z Architecture and revealed by YIMBY earlier this week. While it has not been confirmed, the average square footage of 196 Orchard’s 83 units (over 1,100 square feet) is almost a guarantee that the product will be condominiums. All three buildings should end up becoming attractive additions to the neighborhood, and 196 Orchard Street borrows from the same pages as 204 Forsyth, with both projects offering historically-inspired architecture that will mesh well with what remains of the surrounding pre-war fabric. In the case of 196 Orchard, the site is currently occupied by several low-slung structures, and their replacement will be a definite improvement.

Most of Leyva’s work is significantly glassier than the plan for 196 Orchard, and the architect’s predominant aesthetic has seen a shift in recent years; the spaceship-like designs for 158 Madison and 85 Flatbush Avenue Ext. (both unbuilt) have yielded to brick buildings like 460 Washington Street and 520 West 30th Street (both being built for Related).

196 Orchard definitely explores the latter direction, offering gridded windows, an attractive brick and metal-striped facade, and a retail experience that should greatly enhance the streetscape. In the rendering, it appears as though the 13,463-square foot store space may be targeted towards an Apple-like tenant, though none have publicly committed yet.

No completion date has been announced, but with permits now on-file for both the new building and demolition, work should be starting shortly.