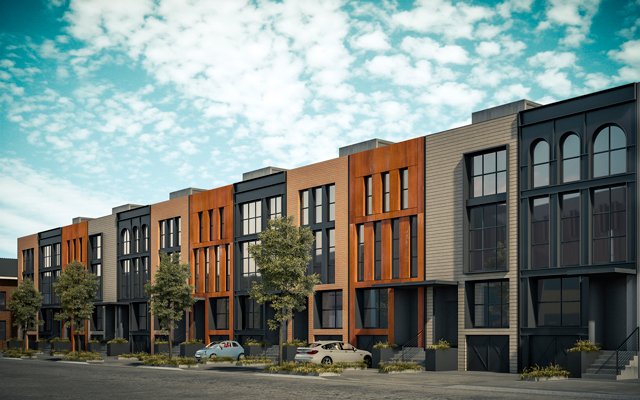 Back in January, YIMBY unveiled the first rendering of a new townhome development coming to 107-125 King Street, aka 115 King Street, in Red Hook. The project includes 22 homes designed by AA Studio, and we now have fresh images of the site (the other side of which fronts 74-85 Sullivan Street), and there seem to have been slight modifications since the previous reveal.

Sanba Partners is the developer, and the buildings will fall on the contemporary end of the design spectrum. The facades will be composed of several different materials, and the new rendering would seem to confirm that some of the homes will even be faced in corten steel, adding variety to a mix that features other metals and several shades of brick. Each of the 22 homes will have four bedrooms and four bathrooms, and they will all feature private driveways and parking. While curb-cuts are not good for a neighborhood’s urbanity, in this case, the buildings are replacing a vacant lot in a relatively low-density area, which means they shouldn’t interfere with too much pedestrian traffic.

YIMBY also got ahold of an even earlier rendering for the site, which depicts more exaggerated window patterns, as well as the rear of the town-homes. If that part of the design has been maintained, the backside of each house will be covered in enormous gridded windows.

Completion is expected by 2016.