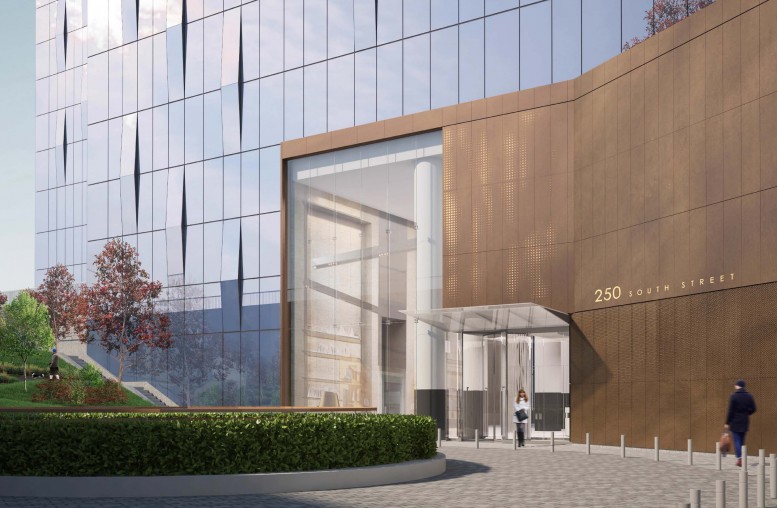 Extell’s new tower coming to 250 South Street received an on-site rendering a few months ago, but now YIMBY has the first up-close look at the project, as well as a few interiors. The building will rise on the site of an old Pathmark, and while it was initially expected to be 68 stories tall, it was reduced to 56 floors on the latest DOB filings.

The latest plan exam indicates the project’s total area will measure 939,850 square feet, of which 914,334 square feet will be residential. The rest will be commercial, with retail space located on the ground floor. While the new renderings do not encompass the entire building, the look appears to be quite glassy, with variegated panes offsetting a super-sleek facade. Besides the facade and an apparent motor court, the new images also include the project’s pool, as well as some sort of amenity room, replete with a miniature garden in the middle. Even though it received a height reduction, 250 South Street will still stand 700 feet tall, becoming the tallest building by far on the Lower East Side. The project will comprise 646 units, split between the larger tower and a shorter 13-story affordable component. Adamson Associates is the architect of record.

While the project has been met with some protests, revitalizing this stretch of the Lower East Side is important, and the neighborhood can easily accommodate more development. The vicinity’s urban fabric was obliterated during New York City’s years of urban renewal, and the remaining tower-in-the-park style developments are a vestige of bad post-war planning. Bowery Boogie posted the on-site renderings back in April, and current signage indicates a completion date of 2019.