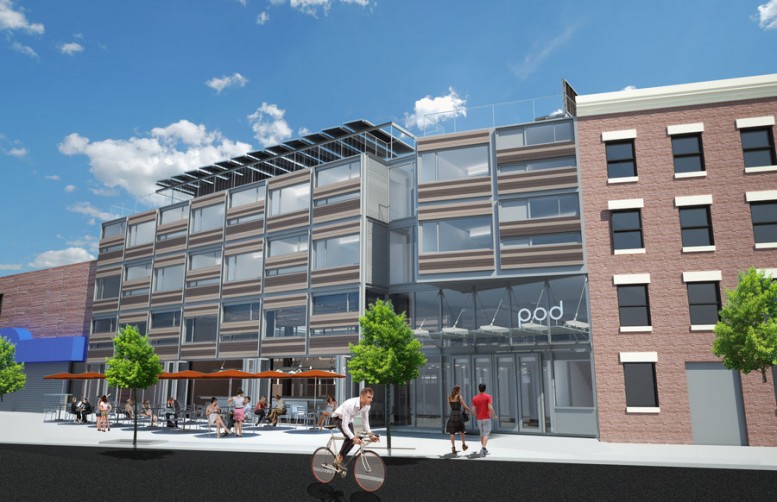 New hotel developments in Williamsburg have tended to cluster along the northern edge of the neighborhood in recent years, but one project will soon get underway at 626 Driggs Avenue, on the corner of North 3rd Street, for which YIMBY now has a fresh set of renderings. SK Development and CBSK Ironstate are developing, and Garrison Architects is designing the building.

DOB permits indicate the building will span approximately 100,000 square feet, which the Schedule A indicates will be split between 255 rooms. Pod hotels are becoming increasingly popular among New York City’s hotel developers, and after the early success of the Yotel’s Midtown West outpost, another branch of that chain is also planned for Williamsburg, so the new Driggs development could be the sign the trend is spreading. Garrison Architects’ describes the design on their website as follows:

The success of the Pod Hotel relies on intelligent and efficient design to provide attractive, spacious-feeling lodgings. Each room is about one hundred square feet. To accommodate this, bathrooms are included in the room space and enclosed with glass dividers to expand the visual dimensions of the room. Windows are strategically placed to draw the eye outside, Storage, workspaces and seating areas are optimized so that every surface is used for a function. Additionally, the project is being “designed as a modular system with two rooms and a corridor joined to create ten foot by thirty foot prefabricated components. The modular system is designed on a BIM platform so that it can serve as a shop drawing and fabrication resource for the manufacturer. This manufacturing approach dramatically reduces construction time and trade coordination errors.” While modular and pre-fab techniques are being tested on a piecemeal basis in New York City, they have typically only extended to residential rental projects until now. If 626 Driggs Avenue is a success, the building’s off-site construction and modular assembly could prove attractive to other developers, especially as bottom-line costs and value-engineering drive hotel design in New York, above all else. Off-site construction of 626 Driggs is already underway and completion is expected in 2016.