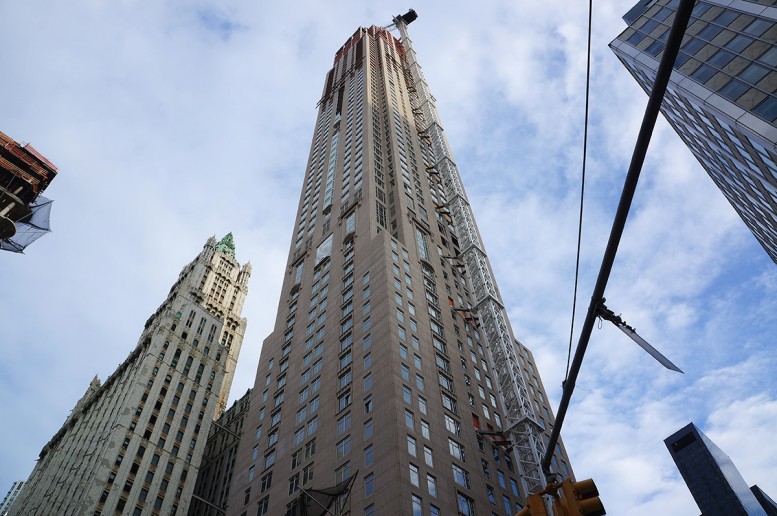 When we last checked in at Silverstein’s 30 Park Place, the 67-story hotel and condo tower had just topped out, becoming the tallest residential building in Lower Manhattan. Now most of the structure has its windows, except for the top 15 stories or so. Cladding has reached even further, and only the five uppermost floors are still naked steel and concrete.

Towering 937 feet above the street, 30 Park’s concrete and limestone facade borrows cues from its pre-war neighbors, including the elaborate, landmarked Woolworth Building. Robert A.M Stern designed the project, which used to be known as 99 Church Street. Once construction wraps, the development will hold 167 condos, stacked on top of a 185-room Four Seasons hotel.

The building’s clean, geometric lines and subtle details separate it from the other glassy skyscrapers underway nearby. It contrasts strongly with the steel-clad 8 Spruce Street designed by Frank Gehry on the other side of City Hall, the former tallest residential building downtown. The contextual look makes perfect sense for an architect who said he aspired to design “background buildings.” Eleven of the condos have closed, and another 114 are in contract, with available units ranging from $3,425,000 for a one-bedroom to $29,500,000 for a 6,000-square-foot penthouse duplex. Evidently buyers weren’t dissuaded by the neighborhood, which is much more Financial District or City Hall than Tribeca. Silverstein will also build a public plaza between Park Place and Barclay Street, and a smaller building to the east of 30 Park Place will include a retail tenant and a cafe.

Construction signs predict that the project will be finished by June 2016. Below-Grade Work Ramps Up for Tribeca Rebel at 65 Franklin Street in Tribeca, Manhattan