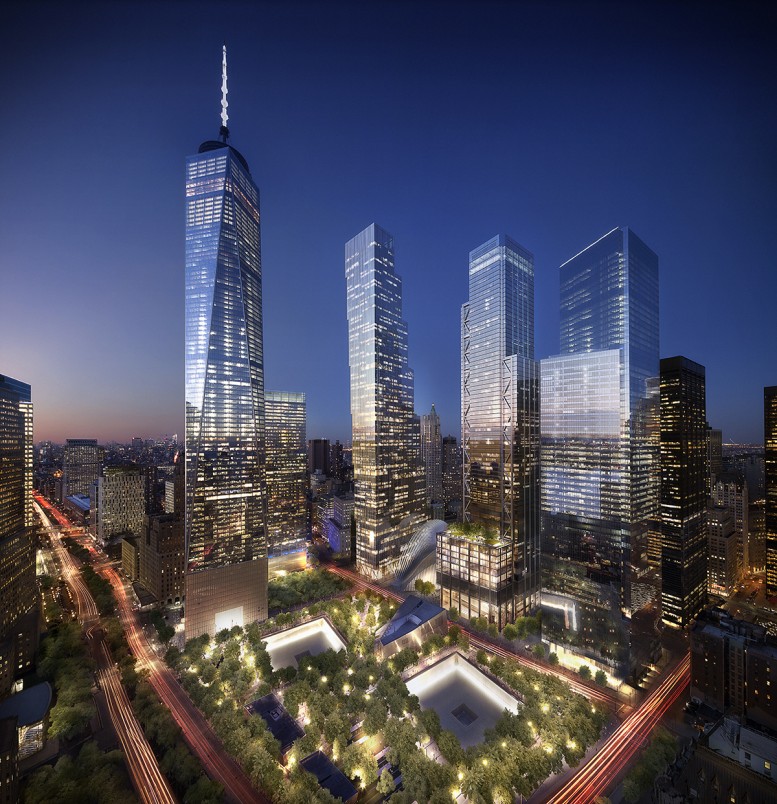 The building was conceived as part of the larger World Trade Center master plan, which the new design for 200 Greenwich will also respect. Rogers Stirk Harbour + Partners is designing 175 Greenwich, and the firm sent along the following statement:

The original intention of the masts on 3 WTC was that they would express the structure of the building as it stretched towards the sky. But as the design developed, it became clear that they did not achieve this objective, and did not contribute to the aesthetic impact or functioning of the building. Furthermore, when we reviewed 3 WTC in relation to the new design of 2 WTC, we realized the two buildings complemented each other and the Libeskind Master Plan best without the masts. Therefore, they are not included in the final design.

The changes to 175 Greenwich Street’s roof are relatively minor compared to what happened next door, where BIG’s design for 200 Greenwich Street replaced what Foster had previously envisioned. But as the statement from Rogers indicates, the towers do not exist in some sort of vacuum independent of one another, and a streamlined roof atop 175 Greenwich better echoes the tops of both 2 and 4 World Trade Center (the latter also known as 150 Greenwich Street).

Besides revisions to the roof, the skyscraper has retained the cross-bracing that will define part of its facade. The 80-story building will still stand 1,170 feet tall, encompassing 2.5 million square feet of office space, and another 300,000 square feet of retail in its podium. 175 Greenwich Street, from the 64th floor of One World Trade Center

Following a protracted delay where developer Silverstein sought an anchor tenant, GroupM signed the first lease for the tower, where construction began again earlier this year. Since work resumed, the superstructure has moved well beyond the old stump of a podium, and the skyscraper’s concrete core is already creeping beyond the depths of the Financial District, and into the Lower Manhattan skyline. Completion of the tower is expected by 2018, but improvements to the neighborhood will be noticeable before then, as the World Trade Center Transit Hub is expected to open next year.