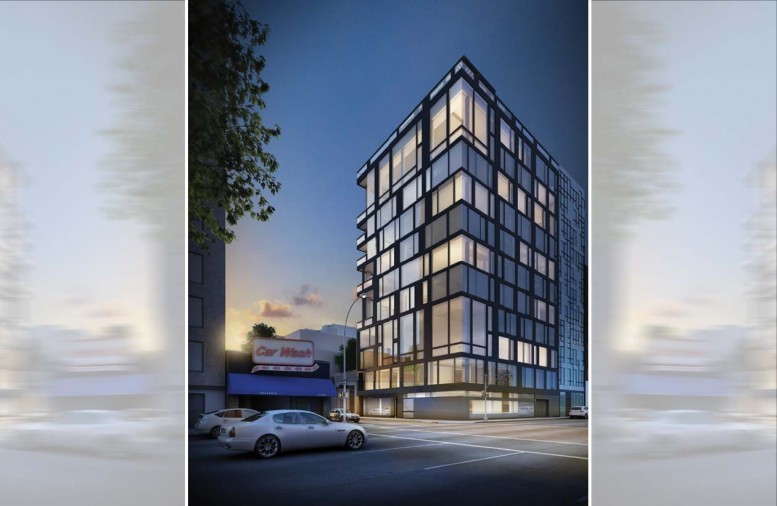 Last week, YIMBY posted an update with the first full renderings for 239 Tenth Avenue, a new eight-unit condominium project that’s about to begin construction on the northwest corner of 24th Street and Tenth Avenue. Now we have another set of images for the building, dubbed “The Getty,” which is being designed by Peter Marino and developed by Victor Group and Shvo. The structure’s eight units will stand on top of a 3,392 square-foot art gallery, and each will feature a private outdoor space, with residences averaging 4,700 square feet apiece, per DOB applications filed back in September.

The new renderings give a better idea of the project’s impact viewed from the High Line, which is the epicenter of luxury development in West Chelsea. As YIMBY has previously reported, the block of 24th Street bound by Tenth and Eleventh Avenue is particularly active at the moment, with construction wrapping up on two projects at the same time as its about to begin on both 239 Tenth Avenue and 514 West 24th Street. Peter Marino’s design for the building will open up the facade facing the elevated park, with much of the southwest corner of the structure sliced away, yielding to a staggered set of terraced balconies.

Viewed from Tenth Avenue, the new building will prove contextual, and will appear to be roughly the same size as 245 Tenth Avenue, next door. It will replace the old Getty Station, hence the project’s name, “The Getty,” which appears on Victor Group’s webpage.

Work is expected to begin later this year, and completion is expected by the end of 2016.