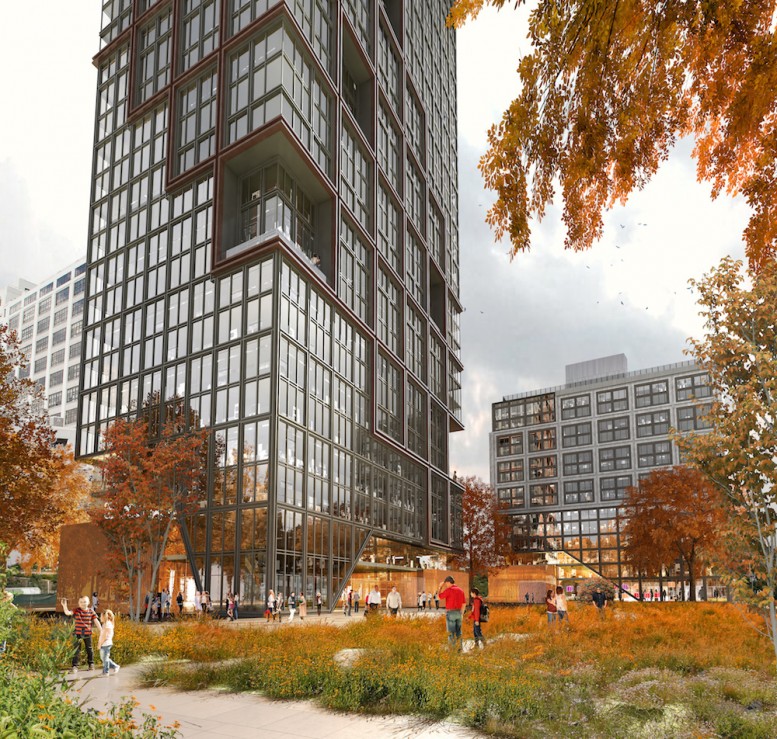 The two towers at Pier 6 in Brooklyn Bridge Park, rendering by ODA

Brooklyn Bridge Park President Regina Myer unveiled the design and developer for the two towers planned on the park’s final development site at Pier 6. RAL Development, who converted the former Jehovah’s Witnesses warehouse at 360 Furman Street to a pricey condo project known as One Brooklyn Bridge Park, is partnering with Oliver Realty to develop the buildings.

Designed by ODA, the complex will encompass 339 apartments, a 75-seat preschool, a 1,500-square-foot community facility and two ground floor retail spaces. The park’s General Project Plan called for two buildings with 433 apartments reaching 315 and 155 feet respectively. Officials have cut nearly 100 units and chopped three floors off both towers, because of how much prices have skyrocketed in Brooklyn Heights since the park crafted its development plan in 2005, according to Myer.

Aerial view of the two Pier 6 towers, rendering by ODA

The building on Parcel A will hold 192 market-rate condos, a parking garage, 3,870 square feet of retail, and public restrooms facing the park. It will reach 14 stories and 280 feet into the air.

Its shorter sibling on Parcel B will rise 125 feet and include 117 affordable and 30 market-rate rentals. Parcel B will also host the preschool, a 930-square-foot retail space, and the community facility.

Overall, more than 30% of the units will be permanently affordable for “moderate and middle income households,” said Myer. The developers have agreed to work with union laborers, and expect to hash out an agreement with the Building and Construction Trades Council of Greater New York.

The vacant sites measure roughly 10,000 square feet each and sit near the southern edge of the park, sandwiched between 360 Furman Street and the BQE.

However, the project still has to get approvals from the Brooklyn Bridge Park Corporation’s Board of Directors and the Empire State Development Corporation. The two entities will hold public meetings in the fall to greenlight changes to the park’s original development plan, which include the shorter buildings and inclusion of affordable housing. Local activists filed suit over the affordable units, arguing that they didn’t create revenue to support the park’s maintenance, but the park settled the lawsuit last month.

Construction is expected to begin in spring 2016 and is supposed to wrap in fall 2017.

BBP will have a public meeting on the development on July 30 at the auditorium of St Francis College in Brooklyn Heights, and a public, written comment period will follow. The two towers planned for Pier 6 in Brooklyn Bridge Park, rendering by ODA