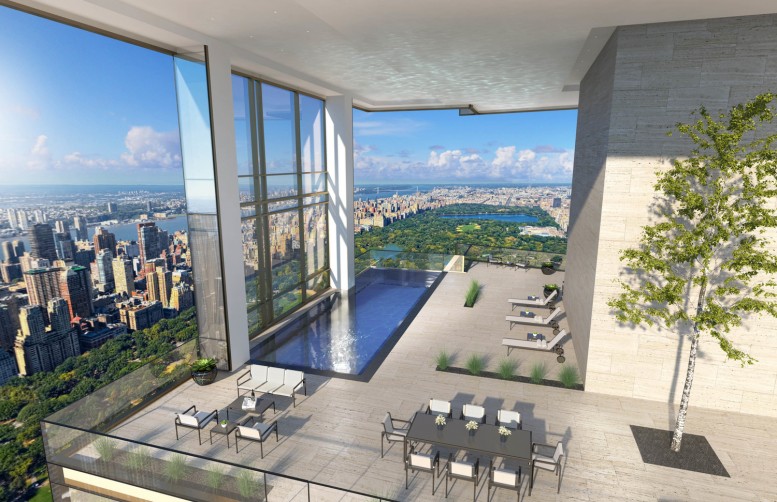 Perhaps the most notable feature of the 1,210-foot tall tower is how it utilizes the old Helmsley Park Lane. Due to New York’s byzantine and nonsensical zoning, the developers of 36 Central Park South will be forced to maintain a percentage of the old Helmsley, the same quandary that L&L is facing in its redevelopment of 425 Park Avenue.

While the City Council finally approved the Midtown East rezoning last week, that still leaves sites like 36 Central Park South out of the mix. If the old Helmsley could be removed completely, a new tower that conforms to the street-wall facing Central Park could be built, but unfortunately, the city stands in the way. Despite that challenge, the developers have made the best of the situation, and the majority of the Helmsley will become an enormous, 200-foot-tall entry foyer for the new tower. In essence, everything up to the height of the surrounding buildings will be empty, with the actual condominiums stacked on top, to take advantage of the views — the ultimate driving force behind 57th Street’s current boom.

The success of 432 Park Avenue and its enormous 10×10 foot windows has clearly echoed into Handel’s design for 36 Central Park South, where panes will measure 10×14 feet. Besides the glass, the building bears a surprising aesthetic similarity to the Trump Soho, also designed by Handel, almost as if it was stacked on itself three times (and whittled down substantially). YIMBY received word from a different tipster who pointed out additional renderings, with a note that they show a design by Herzog and de Meuron, which may or may not be built instead of the Handel version. While we have been unable to confirm Herzog and de Meuron’s involvement, YIMBY heard from another tipster who obtained images produced by Pelli Clarke Pelli, though apparently the firm’s entry did not win the design competition, and reflects a shorter, 800-foot tall version. Evidently there was a substantial design competition for the building, but with the Handel version rendered in multiple formats and plastered on the building’s EB-5 materials, it would appear to be the final design (or close to it, especially given this 30-page PDF on the project, in Chinese). Still, changes could be possible, with Extell approaching the owners of 30 Central Park South for a possible buy, next door.

Per the EB-5 documents, the building will have 88 condominiums, and completion is slated for 2020.