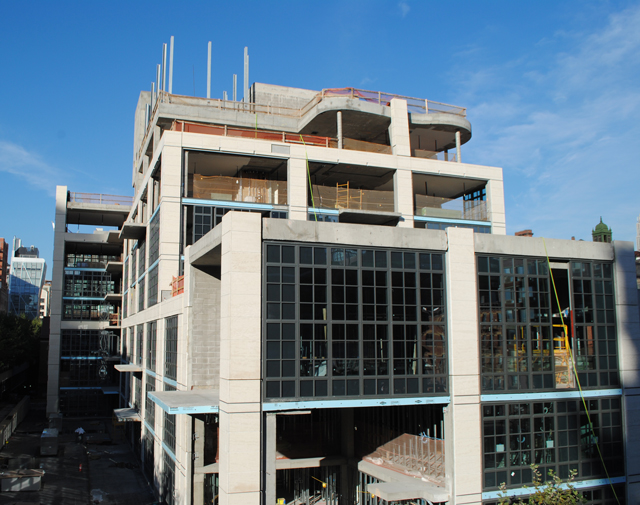 The team behind Sherwood Equities’ luxury condo development at 500 West 21st Street sent along this time lapse of the building rising next to the High Line, beginning in March of last year and ending last month.

The eight-story luxury development brought 32 apartments designed by Kohn Pedersen Fox to the corner of 10th Avenue in West Chelsea. The video shows the building rising, topping out, and acquiring its modernist-inspired limestone facade and floor-to-ceiling windows. The building also has an attractive landscaped roof garden created by designer Rees Roberts + Partners, which springs to life in the latter half of the time lapse. Mark Zeff crafted the look of the interiors, incorporating oil-rubbed bronze, white marble floors and walls, and stained oak cabinetry.

YIMBY tracked the construction progress from its inception, starting with excavation in the summer of 2013.

Apartments hit the market early last year, ranging from one-bedrooms asking $2,200,000 to a $16,000,000 penthouse with three bedrooms, three-and-a-half baths and curved, 40-foot living room. Every unit except the second, recently listed penthouse has sold or entered contract, according to StreetEasy. The development got its certificate of occupancy in May, and move-ins began soon after.

Sherwood built an eye-catching glassy showroom on the other side of the High Line, complete with an incredibly detailed model unit, to sell the pricey condos.