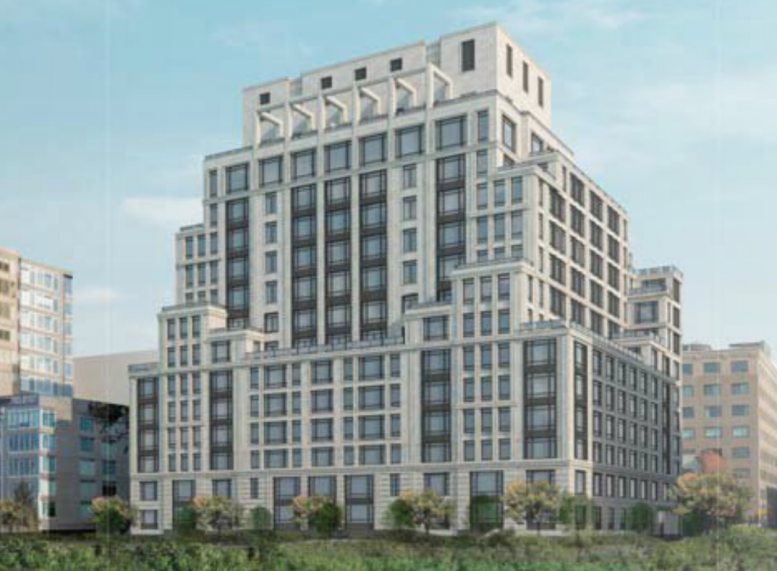 UPDATE: A tipster sends word that while Ismael Leyva is the architect of record, Robert A.M. Stern is the design architect.

Last September, YIMBY reported on the first permits for a new 13-story building coming to 70 Vestry Street, in Tribeca, right next to the West Side Highway. Since then, the site’s two existing structures have been torn down, and we can now reveal the first rendering for the project, which is being designed by Ismael Leyva Architects.

Permits indicate the structure will total 154,019 square feet, the vast bulk of which will be dedicated to residential space, with the remainder of about 800 square feet set aside for retail. With only 47 units planned, that likely means the building will house condos, averaging over 3,000 square feet apiece.

Related is developing the site along with Ponte Equities, although the project’s job application lists the developer as Benjamin Joseph of Bridge Land Vestry LLC as the developer.

The design will be both contextual and attractive, and it should come as no surprise that Ismael Leyva is working on the project, considering the firm has been hired to design several recent Related buildings. Those include both 261 Hudson Street a few blocks away, as well as 460 Washington Street, a few blocks to the north.

70 Vestry Street will be more distinguished than either of those projects, and it appears the exterior will be faced in limestone (and possibly brick, as well). Besides the attractive facade, the project will be fairly short — clocking in at 13 floors and 149 feet — though rooftop embellishments will add some needed visual distinction.

The plan exam for the site was partially approved two weeks ago, meaning construction is likely to begin quite soon, though no formal completion date has been announced yet.