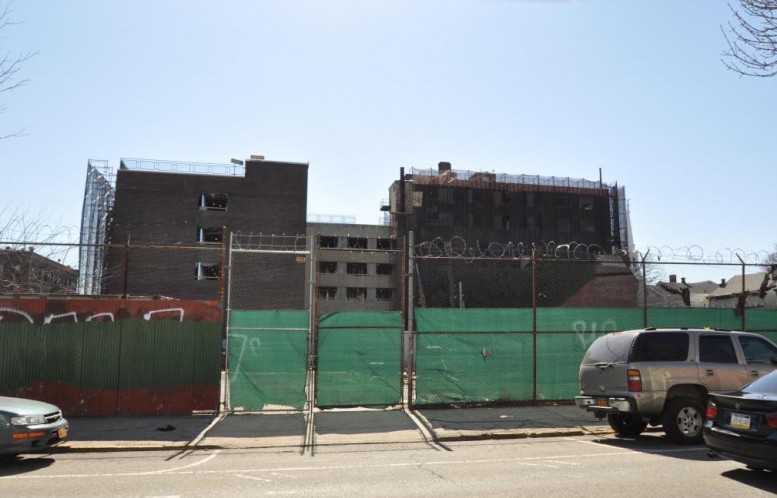 338 Evergreen Avenue in March 2015, photo by Christopher Bride for PropertyShark

Christian non-profit Metro World Child is renovating and expanding its Bushwick headquarters, and their development partner, Moshe Braver, has filed new building applications for a five-story residential project on their former property at 338 Evergreen Avenue.

The property occupies a full block between Evergreen Avenue, Bushwick Avenue, Himrod and Harman Streets, and 338 Evergreen will fill an empty corner of the lot at Himrod and Evergreen.

Several townhouses once stood there, according to architect Bryon Russell, but they were torn down sometime during the ’70s, when a wave of arson and neglect destroyed swaths of Bushwick’s housing stock. The block and its early 20th century buildings have a long history, because it was once home to a neighborhood hospital, and later, a Jewish nursing home called the Menorah Home for the Aged. Two century-old hospital buildings are being expanded and renovated, and the new residential building will bring 180 apartments to the northern half of the plot, which has a main address at 869-881 Bushwick Avenue.

The basement and first floor will have 28 apartments each, followed by 31 units a piece on the second through fifth floors and a 4,300-square-foot roof deck.

Between a surface lot and an underground garage, there will be 115 parking spaces. Part of the complex will house Metro World Child’s headquarters, and the organization will need the parking for visitors and missionaries.

The second building, 889 Bushwick Avenue, will expand from four to six stories and hold 46 apartments. The Department of Buildings approved permits in June, and renovations will involve rebuilding the structure from from the ground up—new foundations, new windows, and completely new interiors. But Russell told us he plans to preserve the brick building’s attractive, 1910s brick facade.

The two residential pieces of the project are getting a 421-a tax exemption, and in exchange, the developer will rent 20% of the apartments for below-market rates.

Then the third building, the old nursing home and its 1950s addition at 871 Bushwick Avenue, is getting a full revamp. The six-story building will become Metro World Child’s new headquarters and missionary training academy. It will host 150,825 square feet of community and residential space, including 113 apartments. The facility will include dorms, “a more permanent housing component,” administrative offices, classrooms and a worship sanctuary, according to Russell. The renovation is almost finished, and the organization will likely move in later this year.

Russell’s firm, Syndicate Architecture, is handling the design for all three projects, and permits list the developer as Moshe Braver of Williamsburg-based Bushwick Realty Holdings LLC.

The hospital was originally built around the turn of the century, and its oldest buildings sit on Himrod Street. The nursing home took over the property in the 1960s and expanded the hospital into an interesting structure with a curved facade, located at the corner of Himrod and Bushwick Avenue.