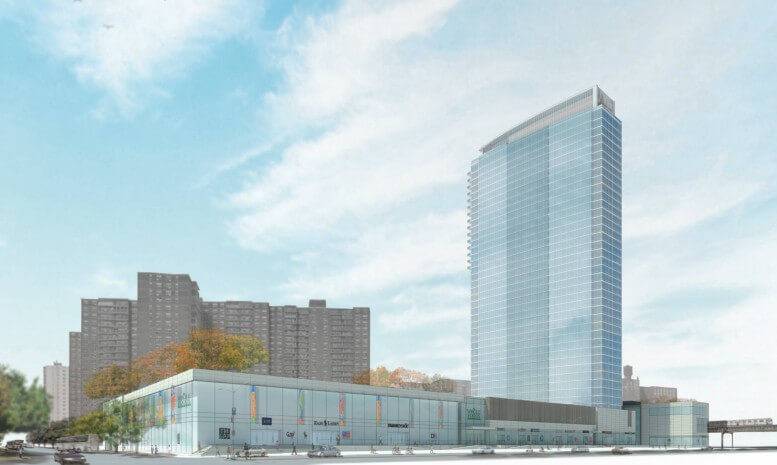 Back in January, YIMBY reported that a 40-story tower was coming to 532 Neptune Avenue, in Coney Island. Now we have a few new renderings for the project, thanks to a tipster, which is being designed by SLCE Architects and developed by Cammeby’s International Group.

Job applications for the building indicate its residential portion will be especially large, comprising 514,000 square feet to be split between 544 apartments. YIMBY’s tipster sent word that the unit count has been revised down to 524, possibly indicating ongoing changes. The retail component will total 162,000 square feet on the first three floors, replacing an existing 120,000 square foot strip mall. While NIMBYs have expressed unfounded anger over the closure of the Trump Village Shopping Center, the new building will be a major improvement compared to the existing structure, bringing more retail, a significant number of new apartments, as well as community amenities (the smallest component will be a 16,000 square foot community facility space).

The building’s height is slightly larger than the 430-foot figure we first reported, which only measured to the highest occupied floor. 532 Neptune Avenue will actually top-out 470 feet above street level, giving a significant boost to the Coney Island skyline, which is currently dominated by clusters of 20-odd story apartment blocks. In terms of appearance, the tower will be relatively simple and glassy, and balconies will be included. Whether the building will hold rentals or condos remains to be seen, but PTACs are not apparent in the renderings, hopefully indicating the environmentally and aesthetically-unfriendly scourge will be absent from this development. With 162,000 square feet of retail to be included, the number of tenants in the new base is likely to be substantial. While no leases have been confirmed, the renderings include Gap, Ralph Lauren, Duane Reade, and a Whole Foods.

No completion date has been announced, but partial job permits were issued in early June, likely indicating that construction will soon be underway if it isn’t already.