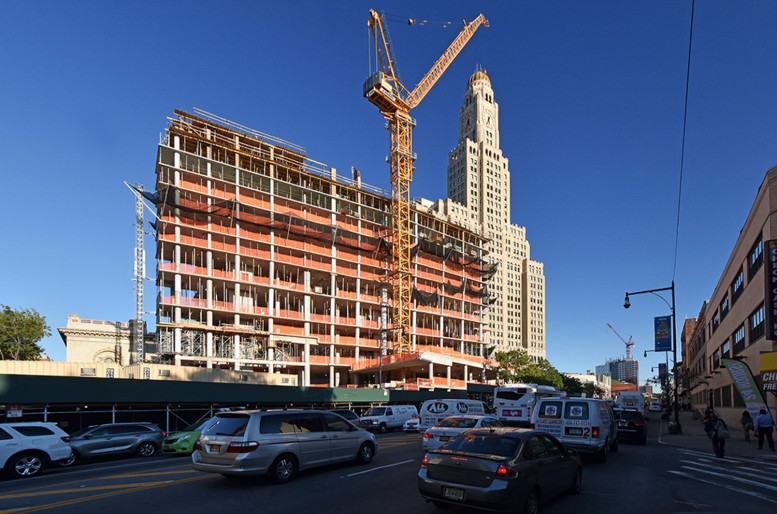 While the Downtown Brooklyn construction boom’s biggest impact will be the addition of residential space, its effects on the streetscape are also going to be significant, and few projects will be more significant to the pedestrian experience than 286 Ashland Place. The building, which is being designed by TEN Arquitectos and developed by Two Trees, will soon stand 32 stories tall, but its significant presence at the street level is already becoming apparent, per the latest photos from Tectonic.

Applications for the project indicate the tower component will have 384 apartments, with 20% set aside as affordable. The base will be divided between 21,928 square feet of retail and 45,148 square feet of cultural/community space. The latter component will be the most important part of the development, and architects TEN Arquitectos have created a form that will mesh the structure into the surrounding streetscape. Direct pedestrian access to the roof of the podium climbs with its ascent from the sidewalk, and the elevated areas culminate in a planted garden. Despite some talk of a glut in the area’s residential supply, the surge of development is sorely needed, and new towers are likely to continue rising in adjacent blocks as Downtown Brooklyn continues to mature. Fifty-story buildings are becoming a dime-a-dozen in the vicinity, with towers larger than 286 Ashland under construction at both 333 Schermerhorn and 250 Ashland Place.

Further east, Greenland Forest City partners are making rapid headway at Pacific Park, and besides activity continuing to chug along at the B1-modular building, work is also starting on the site’s next components, including the KPF-designed 615 Dean Street, which we revealed last week.

As for 286 Ashland Place, completion is currently expected in August of 2016.