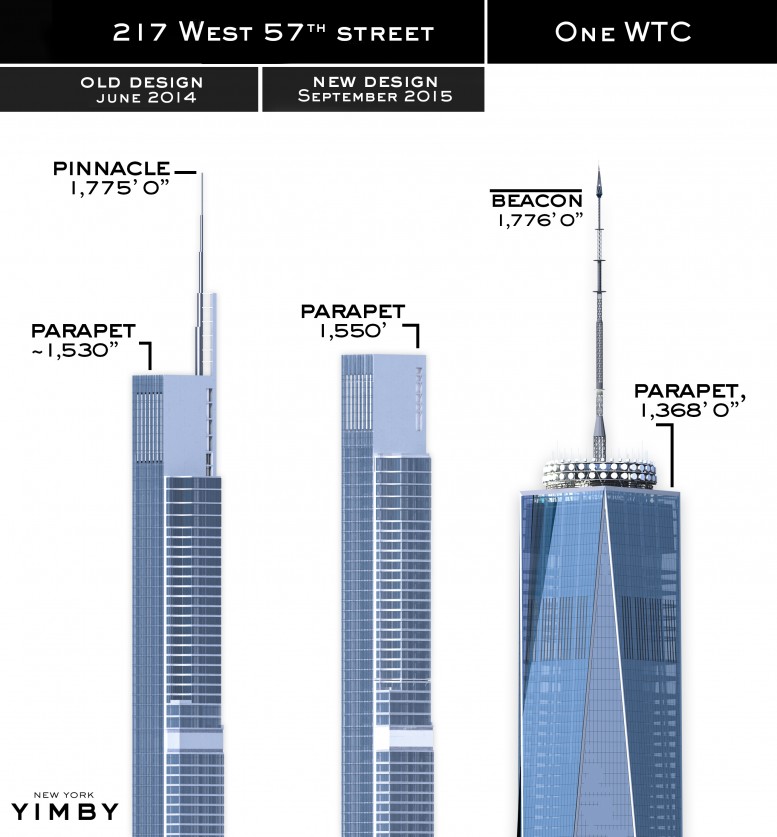 Last month, a rep for Extell told the NY Post that all images of Nordstrom Tower released so far are inaccurate, which is especially confusing considering some of the images came from documents produced in-house at the firm. But the PR doublespeak is technically correct, and YIMBY can now confirm that there has indeed been an additional tweak to the plans, and the country’s future tallest building (by roof height) has been scalped of its spire. Two separate project insiders contacted by YIMBY confirmed that the most recent construction documents left out any indications of a spire, and also sent along the latest schematics, allowing us to create updated renderings of the building. In the realm of absolute English relativity, this does validate the PR team’s claim that the renderings released so far are not final, in that the version presented by Extell earlier this year was not yet value-engineered. Besides discarding the spire, changes appear to have been minimal, although the parapet height has seen a boost to 1,550 feet, and the floor count has increased to 99.

Given the value-engineering that happened at One57, a repeat would seem more likely than not at Nordstrom Tower, and any architectural flourishes beyond the bare-minimum in the design spec are only likely to be found on the interiors. Still, the hand of architects Adrian Smith + Gordon Gill should result in something that transforms the skyline in a positive manner, somewhat resembling a taller and more angular version of the firm’s Trump International Hotel and Tower in Chicago.

One57’s fault isn’t so much its form as its “waterfall” color palette and the mechanical grills visible up top, and these are both problems that 217 West 57th’s sleek design should avoid, with rooftop hardware encased behind the glass parapets. And while the official height may have been reduced from 1,795 feet, a rooftop 1,550 feet above street level will still make it the tallest building by that measure in the United States, surpassing the 1,450-foot top of the Willis Tower in Chicago (and the 1,397-foot peak of 432 Park Avenue here in New York City).

The building has been officially dubbed “Central Park Tower” despite the fact it is not on the Park. 220 Central Park South, now rising across 59th Street, will also obstruct a large portion of the first 1,000 feet of Nordstrom Tower’s Park views. But while many decry the impact of all the new height on the Manhattan skyline, the positive externalities of the project will stretch even farther than the fallacies of its NIMBY opponents.

Combined with the new retail components of 432 Park Avenue, Nordstrom Tower’s rise will likely result in new goal-posts for high-end shopping along 57th Street, with the corridor between Broadway and Park potentially emerging as a rival to the upper 50s along Fifth Avenue. With tourists arriving in record numbers and hotel construction also reaching new highs, the expansion of Midtown’s luxury retail core will translate into more jobs for New Yorkers and more tax dollars for the city.

Cranes are now going up, foundation pouring is underway, and building permits confirm something exceedingly similar to what’s already been posted will indeed rise.

While it seems the spire has been removed, it is always possible that it may return at the last minute, and the most recent changes could simply be a bid for discretion. Though the measure is extreme, it is not without precedent in New York City’s history.

The 1.3 million square foot project is expected to wrap in 2019.

6 Comments on "Nordstrom Tower Has Lost Its Spire, Will Stand 1,550 Feet Tall"