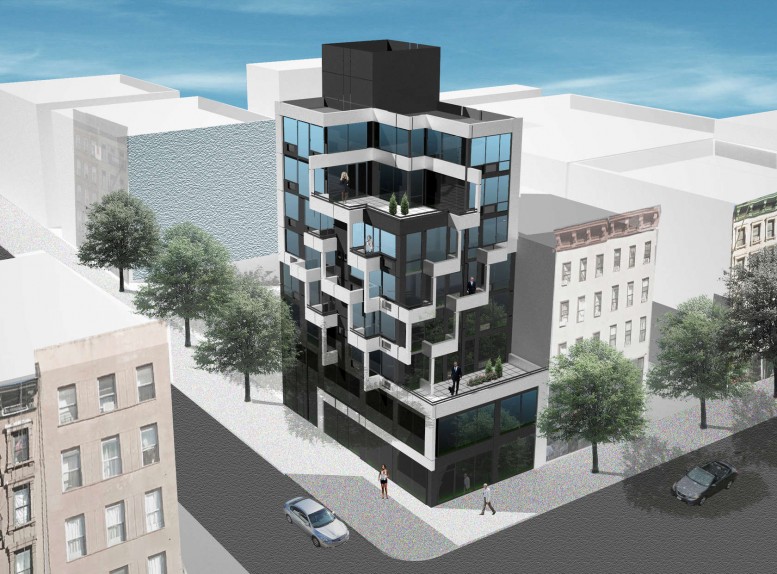 Last month, applications were finally filed for a long-vacant site at 1733 Lexington Avenue in East Harlem, on the corner of 108th Street. YIMBY now has the reveal for the development, which will give rise to a small but contemporary mixed-use project standing eight stories tall.

The developer is listed on permits as Afshin Hedvat under the moniker of 108 Lexington Operating LLC, while the architect is Hany Rizkalla. Applications indicate the structure’s eight floors will start with ground-floor retail, with an ambulatory care center on the second floor, followed by the apartments. The commercial space will total 2,209 square feet, as will the community facility space.

With only ten residential units averaging under 900 square feet apiece, the project could host either condominiums or rentals, but the inclusion of PTACs on the renderings could suggest rentals. Floors three through six will have two residences apiece, while the seventh and eighth levels will have full-floor units. Appearance-wise, the design is certainly contemporarily-minded. The simple envelope is broken up by the exterior’s white cladding, which is also extruded along the first few floors, creating balconies for the residential units. The building’s form retreats slightly as the structure rises, with terraces above both the second and sixth floors, and while the inclusion of PTACs is not appealing, it still makes for an interesting little infill project.

While its impact won’t be enormous, 1733 Lexington Avenue will still be a major positive for the neighborhood, replacing another lot that has long sat forlorn. Development in this part of East Harlem has lagged the 125th Street corridor, but now the boom seems to be encroaching from all sides, especially with the East River Plaza project also entering the planning stages.

No completion date has been formally announced, but the application is pending DOB review.