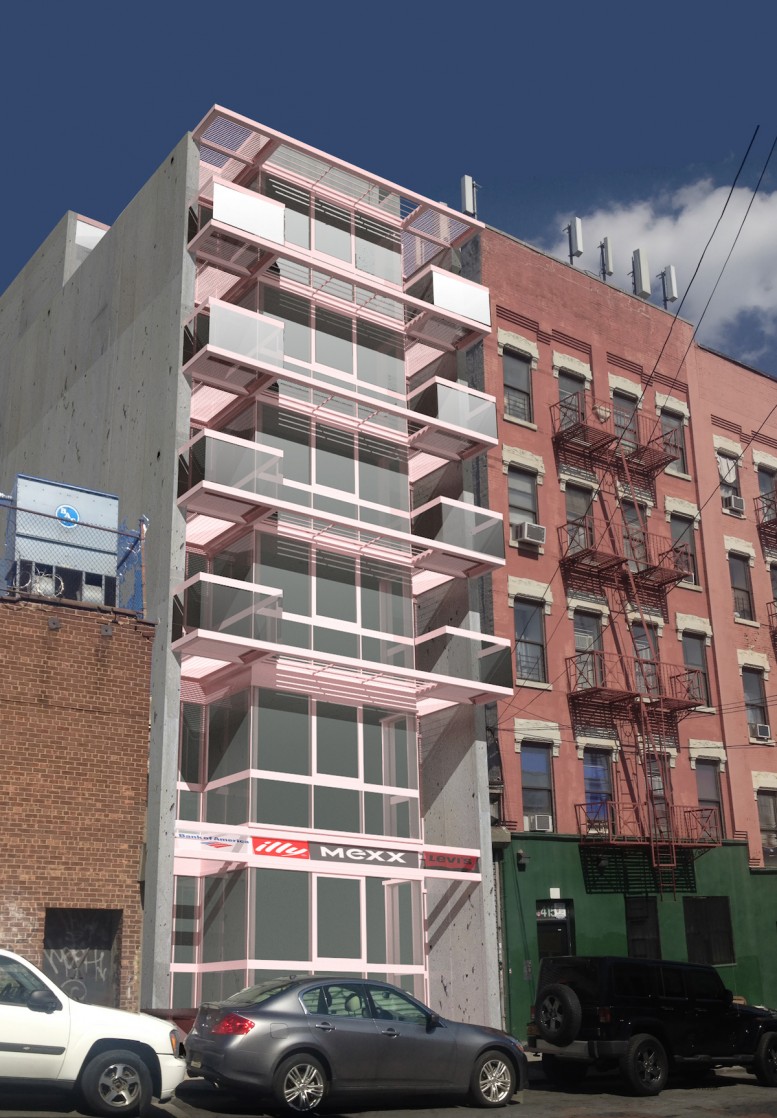 Most of the new buildings under construction in Melrose, in the heart of the South Bronx, are large and heavily subsidized. The city is already developing two sprawling affordable complexes in the neighborhood, La Central and Melrose Commons. But every once in a while, a developer manages to finance a small market-rate building like 411 East 151st Street, and YIMBY has the first look at the future seven-story development.

The 72-foot-tall project will replace a single-story garage between Melrose and Third Avenues, a few short blocks from the Third Avenue-149th Street stop on the 2 and 5 trains and the collection of empty lots that will one day become La Central. Ten apartments will spread across 9,123 square feet of residential space, yielding average units of 912 square feet. The building will have nine two-bedrooms and a one-bedroom stacked on top of retail and community space.

The first floor will host two commercial spaces spanning 2,744 square feet, followed by 2,254 square feet of doctor’s offices on the second floor. Residential will fill the remaining stories, with two units per floor.

Apartments will have floor-to-ceiling windows, and several tenants will be able to enjoy eye-catching private balconies. The pink accents and framing are definitely unusual, and the look will help bring a fresh, modern feel to an aging prewar block.

Fortunately, the project is too small to trigger parking requirements, which don’t make sense in a low-income, transit-rich area like Melrose, where few residents drive.

Architect Hany Rizkalla is responsible for the design, and Sam Kafif, doing business as Mount Eden-based RTH Associates LLC, is the developer. Rizkalla told YIMBY that the slats linking the balconies are brise-soleil, or sunshades. They prevent the apartments from heating up too quickly in the summer and allow for some passive heating in the winter.

Permits were first filed back in 2013, but the development is in its final stages of DOB approvals. Workers have already started demolishing the garage, and construction is expected to wrap by 2018.

Permits Filed for 586 Gerard Avenue in Concourse Village, The Bronx

Permits Filed for 2159 Mapes Avenue in East Tremont, The Bronx

Permits Filed for 2758 Creston Avenue in Fordham, The Bronx