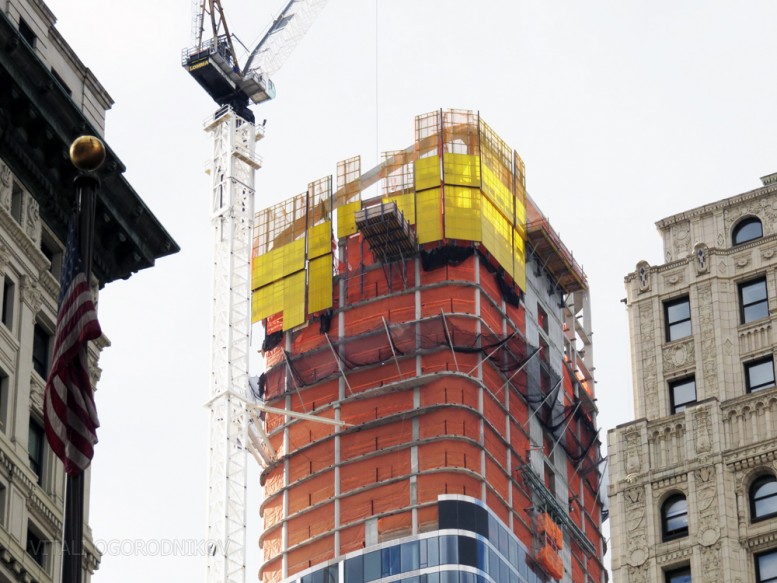 50 West Street is topped out; looking west from Wall Street and Broadway

Exterior completion is approaching for one of the most dramatic additions to the Downtown skyline in decades. The Helmut Jahn-designed residential skyscraper at 50 West Street reached its full height of 784 feet in September. As of today, most scaffolding has been removed from the crown, revealing a slanted concrete halo. The elegant concrete band will soon be obscured by a cocoon of curvy glass, which is being installed only nine floors below.

The 63 story tower is scheduled to open in 2016, around the same time as the similarly scaled 30 Park Place and 56 Leonard, both of which are rising not far to the north. Upon completion, 50 West Street will become Downtown Manhattan’s fourth tallest residential building, though it may not retain that title for long. First proposed in 2007, the tower would have claimed first place if the project had not gone on hold during the financial crisis. Looking north from the Harbor, August 2015

Panoramic views are a key theme for the project, both in terms of design philosophy and marketing. The façade is glassy and transparent, minimizing visual obstruction everywhere except at the core, which faces north. Living rooms along the tower’s curved corners on the lower floors provide double height ceilings, complete with floor-to-ceiling panoramic windows. Prospective buyers are invited into a panoramic theater where they may choose to see a simulated view from any unit.

The top level features an open air, private observatory, where residents or their guests may grill some meat at one of the barbecue stations, or gaze towards the Statue of Liberty and the Verrazano-Narrows Bridge from south-facing stationary binoculars.

While the tower would dominate most skylines in North America, prominence is a relative concept among the jagged peaks of Lower Manhattan. From the east and north, the tower barely registers. A dozen buildings of similar (or much taller) height, located within a half mile radius, provide ample competition on the skyline. Downtown’s winding streets and steep canyons ensure visual obstruction from the street level, except for select view corridors and open spaces such as the Trinity Church compound and the 9/11 Memorial. Looking west from the intersection of Wall Street and Broadway, with Trinity Church in the foreground

On the other hand, 50 West makes its presence known in dramatic fashion from the south and west. The glass pillar absolutely dominates southern Battery Park City and the Greenwich South neighborhoods, and northbound views along West Street put it on equal footing with One World Trade Center. When viewed from the harbor, an unaware observer might even mistake the building for a new addition to the World Trade Center complex. From this angle, its scale and materiality makes it fit right within Daniel Libeskind’s master plan of a semi-circle of skyscrapers of increasing height. Since 1988, harbor views of the skyline have been defined by the 42 story, sweeping glass expanse of 17 State Street a half dozen blocks to the south. Architecture critic Carter B. Horsley has referred to it as “the city’s most beautiful curved building”, edging out heavy competition in the likes of Jean Nouvel’s faceted 100 Eleventh Avenue, Philip Johnson’s Lipstick Building, and pre-war masterpieces such as One Wall Street Court (formerly the Cocoa Exchange) and the nearby Delmonico Building. 50 West reads both as a complimentary form and as an updated take on 17 State’s look. While 17 State’s dramatic sweep finishes with a more traditional top, 50 West’s curves run in a single vertical gesture right to the edge of the parapet at the top, stopping only for a minor setback near the pinnacle.

The parapet is defined by another classic element of New York imagery. The idea of slanted roofs towering over the skyline has been firmly embedded into the city psyche since Citicorp Center rose in Midtown in 1977. While newcomers such as One57 and Hudson Yards proliferate the trope in Midtown, 50 West is Downtown’s first true example of the style.

The building’s base features the most dramatic instance of its sleek upward sweep, bowing outwards in a curved cantilever unlike anything else in the city. Building base as seen from West Street

The cantilever is a creative way to open up space for the Ward’s Walk between the building and the Battery Garage immediately to the south. In its previous iteration, the narrow Walk was intimate bordering on claustrophobic. Looking up from Washington Street

Unfortunately, the architect’s best efforts cannot hide the building’s setting next to an exit ramp off the Brooklyn-Battery Tunnel, which passes under the multi-story garage and feeds into the six lane West Street. To the east, the building fronts the grimy terminus of Washington Street and looks directly onto the garage’s extension, both across the street and suspended over Washington Street itself. The overall composition creates an odd effect of an overbuilt urban cul-de-sac, even though the space is not an actual dead end street. Although the garage-hugging street corner is inhospitable and does not offer much to the pedestrian, there is a certain serenity of this urban enclosure, a pocket of calm in the midst of a busy neighborhood. Regardless of the tower’s immediate surroundings, the greater setting has its positive aspects. The Greenwich South neighborhood is rapidly shedding its grimy ambiance. The northern neighbor at 90 Washington offers an outdoor plaza with a restaurant. The busy traffic of West Street is mitigated with a green boulevard and a bike lane, west of which lie the verdant blocks and waterfront promenades of Battery Park City.

The garage and the tunnel ramps provide an unexpected boon to the residents. While they come off as oppressive on street level, they also supply open space that guarantees broad vistas and ample unobstructed sunlight, until the garage is inevitably redeveloped in the coming decades. Looking up from West Street