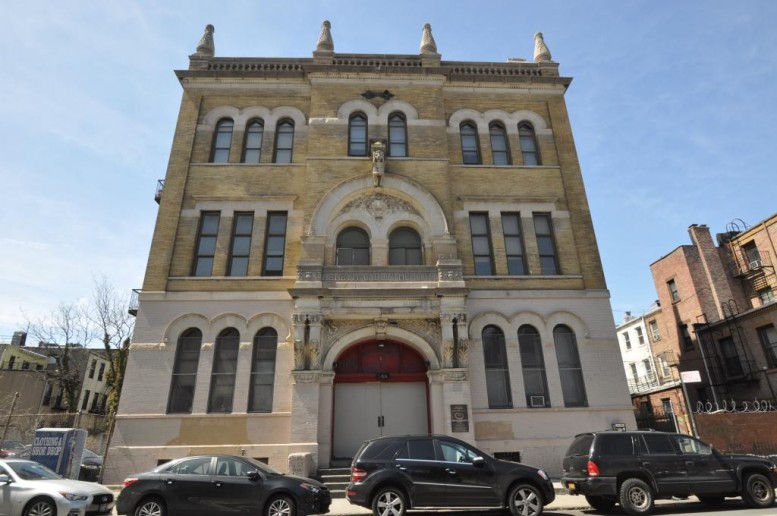 Last month, DNAinfo reported that the struggling Saints Peter and Paul Catholic Church in Williamsburg had leased its large property to Watermark Capital, and the agreement had some unusual stipulations, banning “activities associated with abortion, birth control, euthanasia, stem-cell research or pornography.” Now plans have been filed to erect a 19-story apartment building at 321 Wythe Avenue, on the western half of the through-block church property.

The mixed-use development will reach 120 feet into the air between South 2nd and South 3rd Streets, two and a half blocks north of the Williamsburg Bridge. It will hold 130 apartments stacked on top of 4,868 square feet of community facility space on the ground floor. The apartments will be divided across 99,130 square feet of residential space, for average units of roughly 760 square feet.

The community space, lobby, and parking garage will fill the first floor, followed by two floors of amenities and outdoor terraces. Residential will begin on the fourth floor, with seven to nine units per story through the 17th floor, four units on the 18th and three units on the 19th floor.

The property spans nearly 45,000 square feet and includes the historic Henry McCaddin Memorial building on Berry Street and the little brick church on South 2nd Street. But the Wythe Avenue side of the lot is only used for parking, and the developer will build there. Meanwhile, the church plans to maintain the three-story McCaddin building, which has been used as a concert hall, a school and a library, and its more modern house of worship at 86 South 2nd Street.

Permits list the developer as Yoel Werzberger, and Nataliya Donskoy will be responsible for the project’s design. Donskoy designed Watermark’s first church conversion, which created 87 rentals on the campus of St Mary’s Catholic Church at 81 Ten Eyck Street in East Williamsburg.

Watermark will pay $2.1 million a year for the first 25 years of the lease, and in the 26th year, rent will increase to 7% of the lot’s fair market value, according to DNA.