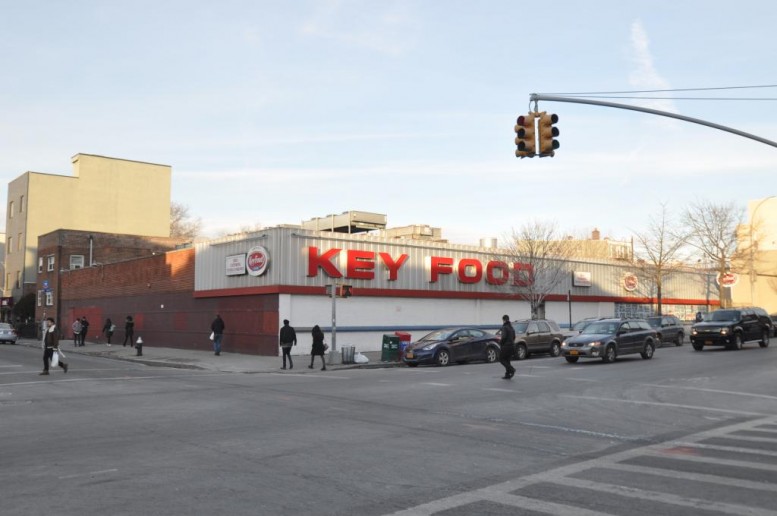 Key Food at 575 Grand Street in January 2015, photo by Christopher Bride for PropertyShark

A Key Food at the corner of Grand and Lorimer Streets in Williamsburg may be redeveloped in a six-story apartment building. New building applications were filed to erect a 107-unit residential building with ground floor retail at 575 Grand Street.

Key Food owner Pat Conte told YIMBY that the grocery store wouldn’t close for a single day during construction. “The grocery store has been there for 60 years, and it’ll be there for 60 more,” he said. The new building would have 25,838 square feet of retail on the ground floor and in the cellars, which is three times larger than Key Food’s current 8,500-square-foot footprint. We also asked him whether the new structure will rise on top the Key Food, and he said, “That’s not technically correct,” without offering any more details.

Those 107 apartments would be spread across 109,976 square feet of residential space, for average units measuring 1,027 square feet. When we asked Conte whether the project would be rentals or condos, he replied, “Speculators and developers want to cash out and make everything into condos. I’m not a speculator or a developer.” So it seems rentals are in the works. But they’ll be fairly pricey ones. The average unit size signals two- and three-bedrooms, and rents in Williamsburg never really seem to go down.

There would be 23 units each on the second through fifth floors, and 18 apartments on the sixth floor, followed by a roof deck. A subcellar would hold a 72-car garage, which is more than the city requires for the apartments. But grocery stores are required to have plenty of parking, and the extra 20 parking spaces will satisfy the city’s car-heavy commercial zoning requirements.

The development site occupies half the block, stretching 27,500 square feet from Lorimer to Leonard Streets. It includes the grocery store and its large parking lot. Tapps Supermarkets Inc. has owned the eight tax lots since the early 70s.

The 71-foot-tall structure would max out the allowed density for these properties, and the new building will span 135,814 square feet. Future tenants will have pretty convenient train access, because the L and G trains are only four blocks north at Lorimer and Metropolitan, and they’ll be able to catch the J and M trains roughly seven blocks south at Hewes Street.