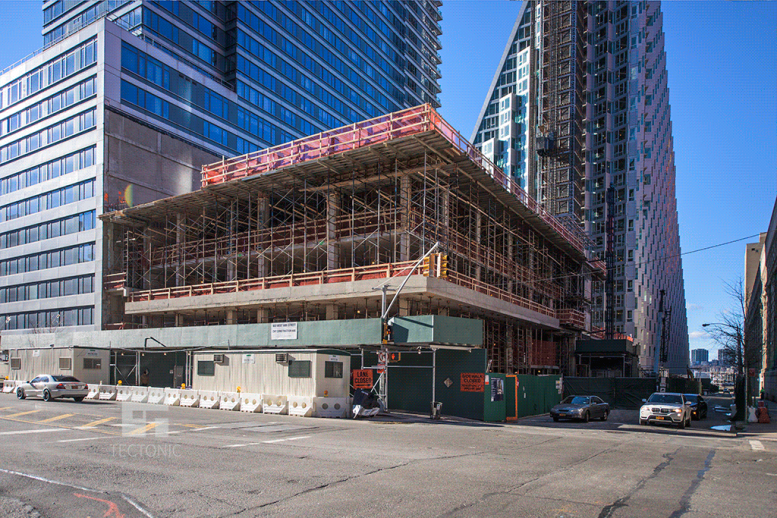 If you’ve gone up the West Side Highway in Manhattan or up Port Imperial Boulevard in New Jersey, you’ve probably noticed the Durst Organization-developed Bjarke Ingels Group-designed Via tetrahedron. Not only is it visually striking, there has been a fair amount of press coverage. Additionally, its next-door neighbor, the high-rise Helena has been there for a decade now. But they are not the only Durst developments on the block bounded by Eleventh Avenue, West 57th Street, Twelfth Avenue, and West 58th Street.

Kind of sandwiched in between them, there is also FRANK 57WEST at 600 West 58th Street, at the block’s northeast corner, which is the southwest corner of the intersection of 58th and Eleventh. The site used to be a Manhattan Mini Storage. The mixed-use building is at least a few stories off the ground, as can be seen in these photos taken by our friend Tectonic.

Eventually, the structure, designed by Studio V Architecture, will rise 10 stories and will have 119,073 square feet of space. 58,972 square feet of that will be for 65 residential units, which will occupy the fifth through tenth floors. With that square footage, each unit will average about 907 square feet. They will range from one- to –three-bedrooms. The development is an 80/20, which means the developer had incentive to set aside 20 percent of the units for affordable housing. In this case, that means 53 market-rate units and 12 affordable units.

Amenities will include storage for 33 bicycles, a fitness room, a lounge, and a roof deck.

Completion is expected by the end of 2016.