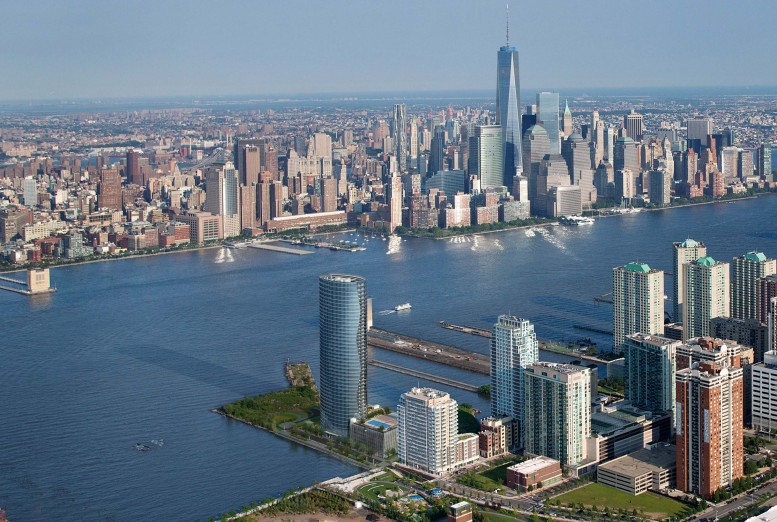 The skyline of Jersey City is on its way to getting another addition. It was announced Wednesday that the LeFrak Organization, which has been building in the city for decades, broke ground for a 43-story building, dubbed Ellipse, in the Newport section at the city’s northern end, just south of the Hoboken border. The tower will rise to a height of 444 feet, six inches, the developer told YIMBY. Ther will be 376 rental units in the 592,800-square-foot project. It will include a retail component, but square footage for residential and retail portions was not available. So, we can’t estimate the average size of the units.

There is no address for the building as of yet, but it will sit beyond the current eastern end of 14th Street, which about lines up with Clarkson Street in Manhattan. It’s not far from the pedestrian bridge that connects the Hoboken waterfront to the Jersey City waterfront.

The building was described by the developer as circular, though it’s closer to an oval. The glassy tower was designed by the firm Arquitectonica, and it is the firm’s first all-glass structure on either side of the Hudson River.

According to the Wall Street Journal, which first reported the groundbreaking, LeFrak had to import 50,000 tons of dirt to help bring the building’s first floor up to about 13 feet, in order to comply with post-Sandy flood regulations. Jamie LeFrak, principal and vice chairman, told the Journal that it increased the project’s cost by about two percent.

Completion of the development is expected in 2017.

If you’re wondering where this building will stand relative to other buildings in Jersey City or the Garden State, in general, Curbed NY published a map in the late summer listing NJ buildings extant or in development. That map limited itself to buildings 475-feet-tall or taller. That means this new construction won’t even be the 23rd tallest building in the state.