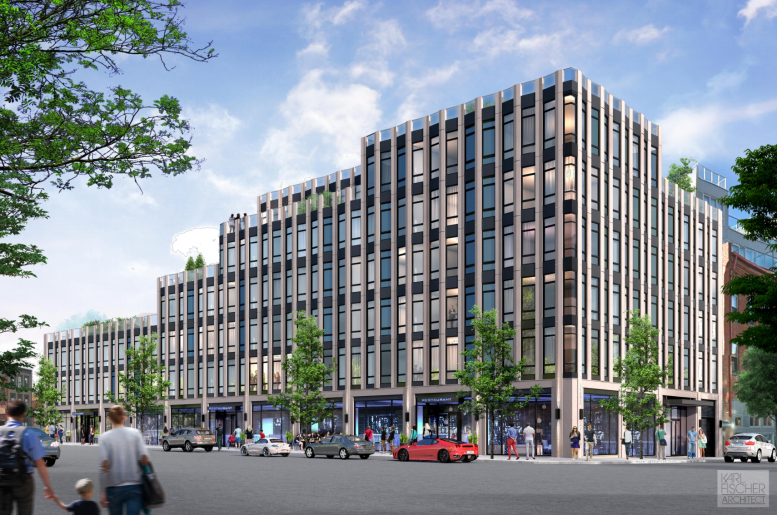 In September, developer Moshe Braver filed to expand a 19th century warehouse at 296 Wythe Avenue in Williamsburg into a six-story, mixed-use building. Now YIMBY has a rendering for the project, which is being designed by Karl Fischer.

Initial permits said that the project will be an expansion, but environmental documents filed with the city last month note that it will be a completely new building. And the glassy, heavily gridded facade pictured above bears little resemblance to the three-story brick building on the site. The ground floor will include 13,300 square feet retail divided between three storefronts. Trendy shops, coffee houses, and smaller chain stores will be interested in the commercial space, which will command rents similar to storefronts along Kent Avenue, on the waterfront.

The new building will hold 45 apartments and 38,096 square feet of residential space, with average units weighing in at 846 square feet. Six units will fill part of the second floor, topped by 14 units on the third, 11 on the fourth, nine on the fifth, and six units on the sixth floor.

A 24-car garage will occupy part of the second floor – as zoning requires. Roughly 1,100 square feet of indoor amenities will take up part of the second and third floors, in addition to a small shared roof deck on the third and a much larger, 1,400-square-foot one on the fourth.

This project appears to be a luxury rental, similar to most new construction on Williamsburg’s Northside.

The development site spans 15,985 square feet and fronts the entire block from North 1st to Grand Street. Braver and his investors just closed on the two warehouses at 286 and 302 Wythe Avenue for $26,500,000 in November. That sale price works out to roughly $515 for each square foot of the planned project.