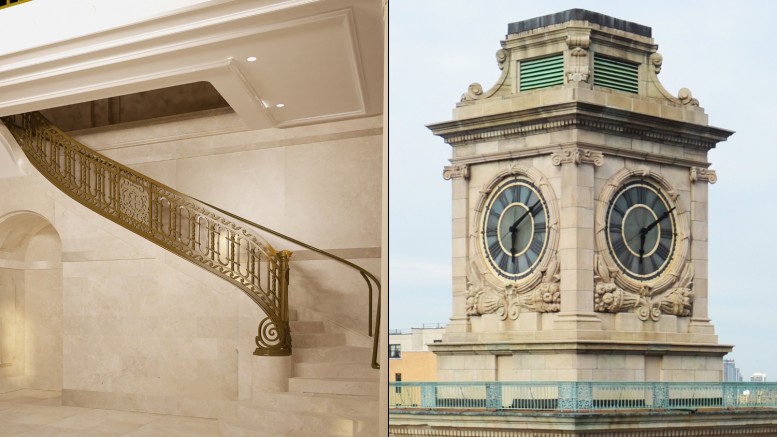 346 Broadway: rendering by Beyer Blinder Belle, photograph by the author

It was back in December of 2014 that the Landmarks Preservation Commission approved (on its second attempt) the residential conversion of the former New York Life Insurance Company Building, later a city office building, at 346 Broadway, in TriBeCa. However, in just the past two weeks, two rulings have come down that will impact the plan from developers Peebles Corporation and Elad Group, being marketed using the alternate address 108 Leonard Street.

One was in favor of the project and came from the LPC. The other was not, and came from a judge. We’ll go through the rulings in chronological order, but first, here is some background on the building itself and the overall conversion plan.

346 Broadway was constructed for the New York Life Insurance Company between 1894 and 1898. Stephen Hatch was originally commissioned to design the building, but died the year construction began. It was completed by the legendary New York City architecture firm McKim, Mead & White. In 1987, the building’s exterior and several portions of its interior were designated city landmarks.

Fast forward nearly a few decades, and the conversion plan. As of December 2014, it included 144 condominiums, plus a restaurant in the two-story former banking hall and community facility space. Exterior restoration, including the recreation of the dome above the clock tower, was part of that plan. John Beyer of Beyer Blinder Belle is the project architect.

Since the conversion requires not just exterior modifications, but a significant reconfiguration of the structure’s interior (including the addition of two new cores), the certificate of appropriateness issued by the LPC included the relocation of several landmarked pieces, among them the president’s office suite, and several stairs. Historic photo of the banking hall at 346 Broadway Current location of the staircase at 346 Broadway

It turns out that the originally asked for relocation of a stair just off the former banking hall won’t work with the developers’ program. So, on March 22, they asked the LPC amend the certificate of appropriateness to allow them to move that staircase into the proposed restaurant. It would be kept intact, reached the same height it has currently. LPC Chair Meenakshi Srinivasan called it a “very nice amendment,” adding that the staircase’s “poetic aspect” will enhance the space. Commissioner Michael Goldblum expressed “slight sadness.” Commissioner Adi Shamir-Baron said it was appropriate, but loved the idea of an “overly-designed” stair in the small space it now sits. Still, the commissioners voted to approve that application without objection. As we reported at the time, part of the original conversion plan included turning the clock tower on the Broadway side of the building into space for a private apartment, and with that, taking the clock from manual mechanical winding to automatic electronic operation. That plan was not popular and the city clock master, Marvin Schneider, was among those who testified against it. At the time, the commission’s general counsel said that while they had the power to mandate the clock keep ticking, they didn’t have the power to mandate how. Well, on March 31, New York State Supreme Court Judge Lynn R. Kotler ruled that the LPC does in fact have that power, the New York Times reported. So, the clock will continue to be operated via manual winding. “There can be no dispute that the internal mechanism by which the clock operates is a significant portion of the clock itself,” she wrote in her decision, the Times published. “…and if the commission can issue a violation for its removal or alteration, the Legislature intended to give the commission the power to compel the owner to maintain the clock’s mechanical operation.” Those who filed the lawsuit, including Mr. Schneider and his fellow clock-winder Forest Markowitz, the Tribeca Trust, the Historic Districts Council, and a group called Save America’s Clocks, celebrated the ruling. “It’s just a huge, huge win,” said their attorney, Michael Hiller, who also represented those fighting the conversion of the former church at 361 Central Park West.

The Times reported that the ruling annulled the certificate of appropriateness. It was unclear if that means simply rethinking the future use of the clock tower space or if it puts the entire conversion project in limbo. 2 Comments on "Mixed Rulings for Conversion of 346 Broadway, TriBeCa"