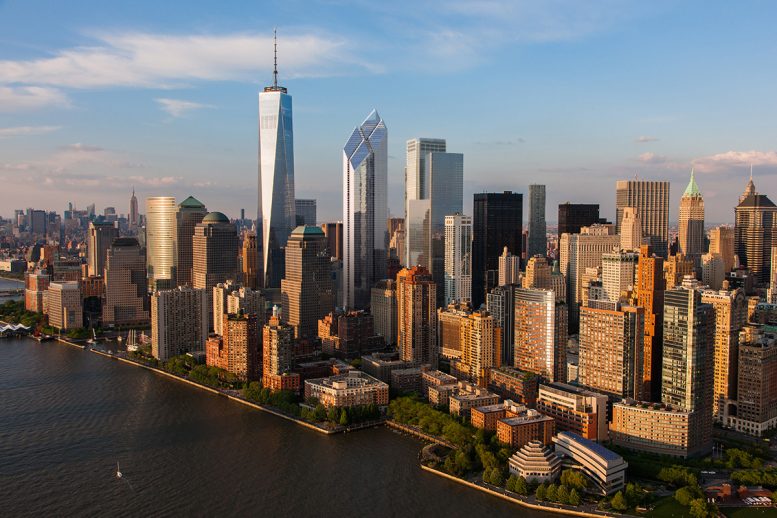 News broke this week that billionaire Ron Perelman committed $75 million to financing the World Trade Center’s Performing Arts Center, which will provide the complex with a much-needed cultural amenity. But with 175 Greenwich, a.k.a. 3 World Trade Center, nearly complete and the remaining puzzle pieces now falling into place, it is YIMBY’s opinion that it is also time to reconsider the design changes proposed for 2 World Trade Center. With Fox failing to commit to BIG’s proposal for the site, it makes much more sense to return to Norman Foster’s far more attractive design for the tower, which was shelved last year.

The crux of the argument comes down to the intention of the site’s master plan, when the architects of the four main towers worked together to come up with a cohesive vision that would both respect the site’s history while also restoring the Lower Manhattan skyline to its former glory. Each of the buildings was designed to complement the others, and while minor parts have been value-engineered, the vast majority of the plan has been built as originally envisioned.

When it comes to 2 World Trade Center, things get more complicated (and evidently, the tower did not meet its originally-anticipated 2011 completion date). But that doesn’t mean Foster’s design is unfeasible. In fact, the base of that design has already been built to street-level — which would have to be completely redone if BIG’s tower ends up rising. Transit Hub at center and Two WTC’s foundation at right, from Earthcam via the YIMBY forums

The reason for the change in architects was Fox’s tentative commitment to the site, which has since fallen through. They wanted layouts that Foster’s version could not provide, and so BIG created a design that stacked boxes of various sizes on top of one another, allowing more flexibility, and catering specifically to media companies.

Unfortunately, that design fails to relate to any of its neighbors in any meaningful way. Besides the numerous cantilevers — which are controversial enough on an individual basis — the bottom of each box would feature a moving ticker tape, casting stock symbols and whatever news Fox saw fit over the site of the most devastating attack in the country’s history.

Nothing is explicitly wrong with BIG’s design, which is certainly innovative. But it would be much more at home in Times Square or Hudson Yards, instead of the most hallowed ground in New York City.

Foster’s vision was the complete opposite of BIG’s. Instead of rising as a glorified staircase, the tower would first ascend from a prominent base featuring trading floors. The mid-levels, though uniform, match the other towers in the complex, which also feature relative monotony for the bulk of their programs. But the big difference, and what’s truly beautiful about Foster’s design, is the crown. Under Foster’s scheme, 2 World Trade Center’s mass would’ve been capped by four separate pinnacles, each topped by its own diamond, rewarding the Lower Manhattan skyline with a true crown jewel. 200 Greenwich, the site’s address, would bridge the divide between its flat-roofed neighbors at 175 and 150 Greenwich and the soaring spire atop One World Trade Center, while attaining prominence in its own right, both out of sheer height and unparalleled uniqueness.

Despite the lack of anchor financial tenants in the current market, the Foster design had the same square footage as BIG’s, and the interior space would realistically be just as good as whatever the alternative would have. More importantly, it would have been truly unique and original to New York City; a series of cantilevers is certainly creative, but it is no more inventive than 625 West 57th Street (VIA 57 WEST) is compared to Mercedes House just a few blocks to the south. When it comes to a site that is so important to New York City’s future, something as respectful as it is iconic is key. And after a year of reflection, it seems obvious that BIG’s tower is not the kind of building that would befit the new World Trade Center. Without the tenant it was specifically designed for, why should it rise anyway?

With the Performing Arts Center set to rise in the near future, and the Greek Orthodox Church also coming along, the gaping wound in Lower Manhattan’s cityscape is finally almost done healing. But with the fifteen-year anniversary of September 11th on the near horizon, it is important to remember both the significance of the site as a whole, as well as the intention of the original masterplan. For those reasons, it is important that the final stitch in mending the area’s urban fabric stay true to the superior building that was originally envisioned.

At the end of the day, Foster’s design was custom-tailored to the memorial, the surrounding neighborhood, and the New York City skyline; BIG’s was created specifically for a corporation.