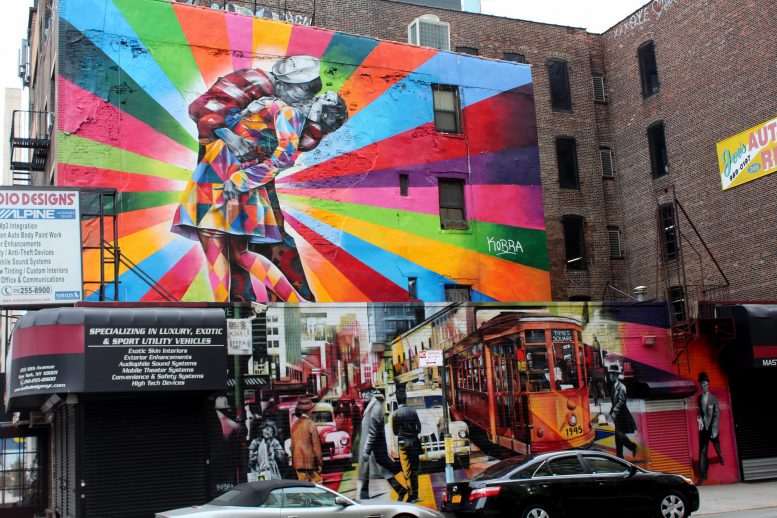 This Eduardo Kobra mural occupied the side of 253 10th Avenue until earlier this year. photo by Flickr user Wally Gobetz

Days are numbered for the auto body shops, car washes, and gas stations near the High Line in Chelsea. They’re slowly being replaced with apartments, art galleries, and artisanal food shops. Last week, plans were filed for a new building that would replace a car stereo store on the corner of West 25th Street and Tenth Avenue.

The second through fifth floors would hold one unit each, topped by a penthouse duplex and a roof deck.

The site also includes 253 10th Avenue, a four-story apartment building that has an Italian restaurant on the ground floor. Demolition plans have not yet been filed for the 19-and-a-half-foot wide structure. Eduardo Kobra’s iconic mural depicting a sailor kissing a nurse—based on Alfred Eisenstaedt’s famous 1945 photograph—graced the side of the building for several years. Unfortunately, the previous building owners painted over the wall earlier this year. They probably wanted to prevent the artist from filing suit to save the mural (and possibly the building) under the Visual Artists Rights Act, the same law that the artists at 5 Pointz used to try and block the demolition of the street art project’s warehouses in Long Island City. The buffed wall where the Eduardo Kobra mural used to be at 253 10th Avenue. photo by Mary Lane/NYC Cliche

The Bloomberg administration rezoned this area back in 2005, switching the zoning on some blocks from light industrial to mixed-use. The rezoning also came with tenant protections. Developers have to get a certificate of no harassment from HPD in order to demolish or substantially alter any building in the West Chelsea district. That means the tenants would have to agree to leave of their own free will, usually with a buyout from the landlord.

GDS Development, headed by Michael Kirchmann, is developing and designing the project, and GF55 Partners are the architects of record.

Both the car stereo store and the apartment building have been owned by the same family since 1981. Neither lot has changed hands recently.