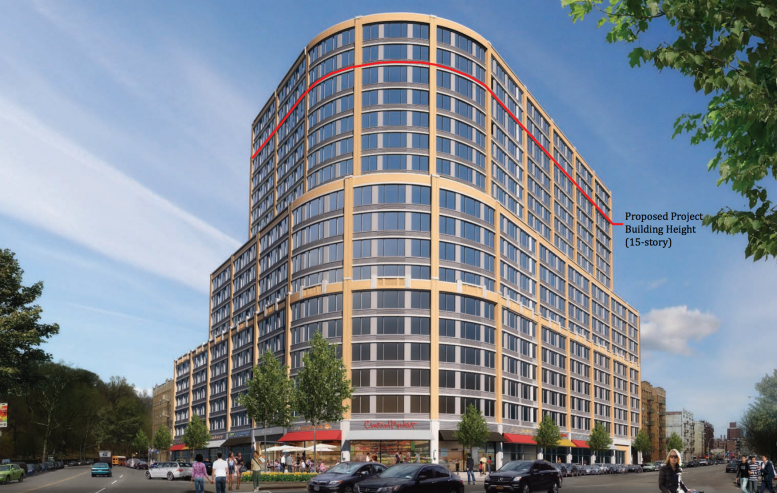 After two weeks of haphazard fits and starts and a confrontational protest with tenant activists, City Council Member Ydanis Rodriguez and the City Council Land Use Committee unanimously disapproved a plan to rezone the corner of Broadway and Sherman avenues, which would have paved the way for the construction of a 15-story apartment building known as Sherman Plaza.

Washington Square Partners and Acadia Realty Trust had planned to build a 355-unit residential project at 4650 Broadway, in the borderlands between Inwood and Washington Heights. The city had worked out a deal with the developer to subsidize half those apartments—178 units—and rent them at below-market rates.

Initial plans had called for a tower as tall as 23 stories, but after negotiations with Manhattan Borough President Gale Brewer, the developers agreed to scale down the building to 15 stories, according to Politico New York. Without the rezoning, the developers could put up a 14-story, market-rate building with 199 apartments, according to zoning documents posted in June.

Rodriguez announced that he wouldn’t support the rezoning at a press conference last night in front of the development site on Broadway. The move came as an about-face for the councilman, who has said at a previous rally that it would bring much-needed affordable housing to the neighborhood.

In last night’s speech, which he also posted on Facebook, he said, “The building must be 50 percent affordable, it must provide ample permanent space for local cultural non-profits and neighborhood service providers, and it must be supportive to small businesses struggling to compete against big box stores, banks and chain pharmacies.”

It’s not entirely clear why Rodriguez changed his mind and pulled his support for project. It may have simply been pressure from his constituents. Roughly 100 Inwood residents gathered last week to oppose the development and argued that many long-term residents don’t earn enough to qualify for affordable units in the building, according to Gothamist. Housing activists claim the typical family living east of Broadway earns only $25,000, and the developers had hammered out a deal to rent 20 percent of the building’s units to families who earn an average of $31,000 a year (40 percent of the Area Median Income).

Sources told Politico that the councilman “began asking for perks the mayor’s team found too costly.”

“We didn’t think it was possible [to support the project] without major concessions to the community,” explained Russell Murphy, Rodriguez’s chief of staff. Those concessions included deeper affordability, large community spaces, and commercial spaces that offered reduced rents to small businesses.

Murphy explained that the council member had been focused on a planned rezoning of the neighborhood’s industrial zone. They hope to rezone Inwood’s eastern waterfront—which only allows manufacturing and commercial uses right now—to enable the construction of large, mixed-use buildings with affordable apartments. The New York City Economic Development Corporation (NYCEDC) released a plan for the northern tip of Manhattan last month, and the Department of City Planning should release initial zoning documents next month.

The Sherman Avenue tower would have been the first major project to secure city approval under Mayor Bill de Blasio’s new Mandatory Inclusionary Housing program. The policy, which was greenlighted by the City Council in March, requires any developer who wants to build on rezoned land to rent at least 20 percent of the units in their new building at below-market rates.

The large corner site on Broadway was formerly home to a Packard showroom, and is now a two-story garage with a curved facade.