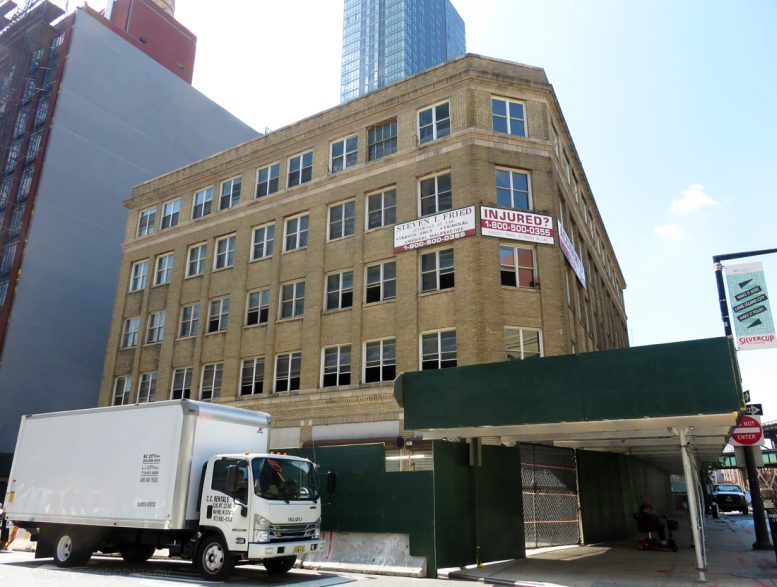 In formerly industrial Long Island City, most new developments start with a blank state. Some projects, such as the Dutch LIC, Factory House, and 42-14 Crescent Street pay homage to the district’s past via design cues. Other developments, such as 29-37 41st Avenue, 23-10 Queens Plaza South and 43-22 Queens Street, incorporate new towers alongside existing pre-war structures. The project at 24-16 Queens Plaza South takes preservation in a slightly different direction. There, Greystone Development reimagines the façade of the five-story, pre-war commercial building as the base for a new residential tower. The 22-story building at the foot of the Queensboro Bridge will be designed by the Midtown-based firm Woods Bagot. The ground level will be anchored by a 3,863-square-foot retail space, with 117 residential units to be stacked above. The existing property sat unused for some time, and construction scaffolds rose around its perimeter earlier this month. Looking northwest from Crescent Street, prior to construction work. April 2016.

Though the building design has yet to be revealed, we can make informed guesses about its future appearance. Construction permits list the present building as 60 feet tall; the addition would rise to 293 feet, a figure that may or may not include a bulkhead above. The total floor space would grow from 37,500 to 90,365 square feet. Thus, the new structure would rise five times higher than the original while yielding only two-and-a-half times as much floor space. After crunching the numbers, the average floor plate of the current building clocks in at 7,500 square feet, while those in the new tower portion would measure about 3,100 square feet each, or less than half in area. This leads us to believe that the original, five-story portion would be capped by a more slender, 17-story tower, which would almost certainly be set back from the street. The resulting setback is likely to house a terrace with the outdoor pool that has been mentioned in the developer’s press release. We also expect reasonably tall ceilings, given the generous height-to-floor-count ratio of 13.3 to 1. Greystone Development is a newcomer to the fire-hot Long Island City real estate game. The firm’s portfolio chiefly consists of newly-built waterfront properties up and down the east coast, a series of mid-rise residential buildings scattered around the eastern U.S., and a handful of historic renovations in Lower Manhattan. The latter is a reassuring sign that the firm knows how to treat a historic façade with proper respect. On the other hand, the architecture of Woods Bagot, which would also make its LIC debut with this project, displays a strikingly contemporary design paradigm. Its projects, located primarily in China, Britain, and Australia, are defined by sleek Modernist surfaces, sharp Deconstructivist angles, and sweeping curves. We hope that the architect-developer partnership brings their A-game in their reflective fields of expertise, and constructs an architectural gem that combines the best of the old and the new.

The new building’s height and scale would be comparable to the 27 on 27th, a similarly-slender, 27-story-tall residential building a block east. Both would become a part of the roughly 300-foot-high skyscraper plateau, which is formed by a handful of nearby towers and gives a visual foundation to the new Long Island City skyline. Though most view corridors are already limited by nearby buildings, or will become so in the coming years, the west- and northwest-bound viewsheds are unobstructed and will remain so for the forseeable future. These vistas open upon the sweeping steel span of the Queensboro Bridge, as it leaps across the East River and Roosevelt Island into the thick of the supertall towers rising along Billionaires’ Row in northern Midtown. Looking south, with One World Trade Center in the distance

Although the new tower is no match for some of the neighborhood’s rising and planned skyscrapers, 24-16 Queens Plaza South would still dominate its Crescent Street block. In terms of real estate, the block is hot: with minor exceptions, every building at the block-long stretch is either under construction or was completed within the past few months. The south facade of 24-16 Queens Plaza South meets the 13-story, John Fotiadis-designed residential building at 42-14 Crescent Street, whose exterior is nearly complete. Immediately south, permits have been filed for a nine-story project at 43-22 Crescent Street. This three-for-one development package faces the 11-story Luna LIC at 42-15 Crescent across the street, which opened its doors to new residents in March. It shares the block with the construction pit of 41-20 27th Street, where a striking 18-story project designed by ODA New York is set to rise. The latter shares its construction fence with that of the 20-story 42-10 27th Street on the other side of the block, where foundation work is ongoing. Yet more buildings are in the works across the street from there, but we should stop before we lose focus of the subject at hand. Fortunately for the future residents of 24-16 Queens Plaza South, most of this construction would be done by the time they move in. While nearby construction would no longer be a noise issue, the same cannot be said for the elevated N, Q, and 7 trains, which rumble just 75 feet away from the building. The train trestle runs above the exit ramp of the Queensboro Bridge, which spills traffic onto the bus-lined Queens Plaza South. On a positive note, the stretch of Queens Plaza west of this junction does not see heavy car traffic, and neither does Crescent Street. Widened sidewalks, sufficient for basic greenery and public landscaping, may be achieved by slightly realigning the adjacent traffic lanes and medians. That would go a long way to improve the pedestrian experience at this crowded stretch.

Of course, this congestion is a reflection of unparalleled accessibility. Queens Plaza connects the bridge to Queens Boulevard, Northern Boulevard, and Jackson Avenue, some of the borough’s most important traffic arterials. Its sidewalks present the premiere bus hub in western Queens, with routes running in all directions. For those looking to live within immediate proximity of Midtown, but outside of Manhattan, Queens Plaza is about as good as it gets. The 59 St-Lexington Avenue station in Midtown is one stop away via the N and Q trains. Several more train options lie a few blocks away. A Citi Bike station sits within a block at the Queens Plaza greenway, which connects to the bridge pedestrian path. Looking north, with the Queensboro Plaza station in the center. April 2016.

The Queensboro Bridge was the borough’s single greatest development catalyst, boosting its population from around 280,000 at the time of the bridge’s completion in 1909, to over a million residents in less than twenty years. Surprisingly, at the time, the bridge did little to generate development around Queens Plaza. But even the few commercial structures that rose along its flanks made for the most significant pre-war office district in the borough. Since the historic office building stock in Queens is already scarce, we applaud the developers that treat preservation-worthy facades with due respect. We are mindful that the original building remains standing only because of the foresight of the developer, who could just as easily have opted for demolition. Since the most significant landmarks are already protected, we call upon the city to encourage developers to go one step further. Perhaps the city may apply the same incentives already granted for inclusionary housing, infrastructure improvement, and public space creation to those developers that volunteer to incorporate unprotected pre-war structures into their design. We support preservation of our city’s incredible architectural legacy while maintaining healthy urban growth.