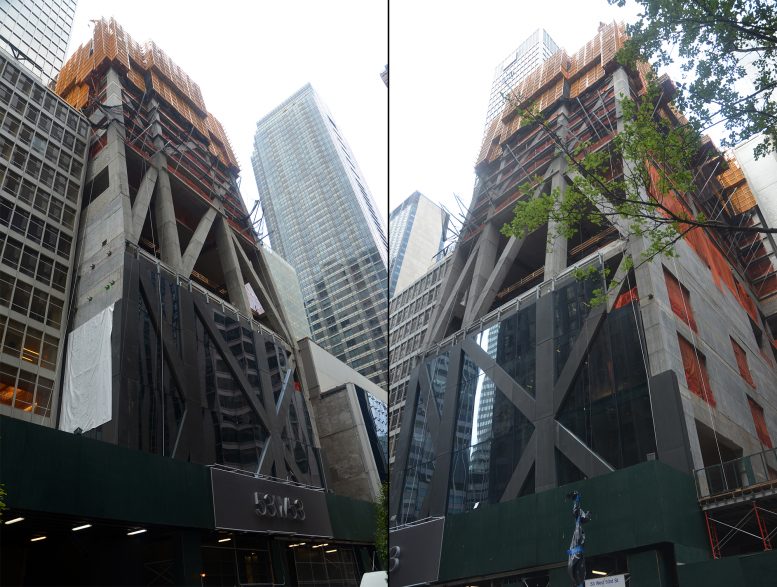 Construction on the 53rd Street side of 53W53. All photos by Evan Bindelglass unless noted

One of New York City’s newest crop of supertalls will soon sprout above its neighbors. YIMBY recently stopped by 53W53, where curtain wall installation recently began. Construction on the West 54th Street side of 53W53

53 West 53rd Street is a through-block site between Fifth and Sixth avenues, right next to the Museum of Modern Art. In fact, the museum, at work on an expansion project, will have space in the new residential building. Eventually, 53W53, designed by Jean Nouvel, will rise a marketed 82 stories to 1,050 feet. Inside will be 145 condominiums designed by Thierry Despont. Hines and the Pontiac Land Group, along with Goldman Sachs, are the developers. David Penick, managing director at Hines, and Tim Flynn, vice president of design and construction at Hines, served as YIMBY’s guides during this visit to 53W53. Currently, it stands about 20 stories off the ground, with nearly 30-foot-tall, triple-glazed glass panels, manufactured in Germany and assembled in Texas, in place on the floors that will house MoMA’s expansion area. In the end, there will be 5,747 glass panels on the structure. Corner portion of the diagrid at 53W53 Also clearly on display is the diagrid. The building is being constructed using poured concrete, delivered to a pump on the ground floor and from there, pumped to the top. This is the first building using a diagrid to this scale in poured concrete. Concrete pump on the ground floor of 53W53 Concrete spout at the top of 53W53 Of course, there are also steel cables in the diagrid, but so many that they have to be tied together at massive metal nodes. One already installed on the sixth floor weighs 12,4000 pounds. Steel cable node as it is installed on the sixth floor of 53W53. Photo by Giles Ashford

The one that will join these cables will weigh 5,200 pounds. The building will end up with 31 nodes. At the top, the view is starting to get impressive. Clearly visible to north-northeast are 9 West 57th Street, the Sherry-Netherland hotel, the GM Building, 432 Park Avenue, and the former Sony Tower. That view is unlikely to be obstructed in the foreseeable future. Penick and Flynn also pointed out these yellow temporary cages that are constructed at the top of the building. The Department of Buildings requires sidewalk sheds to protect people on the ground, but they said this kind of caging provides greater protection when buildings of this scale are under construction.

We also got a peek at the swimming pool on what is marketed as the 12th floor. Swimming pool under construction at 53W53 Rendering of the lap pool at 53W53

Many buildings, whether they be hotels or residential structures, often put their pools underground to allow more space for occupants above. Situated across from Black Rock (the CBS Building at 51 West 52nd Street), the atmosphere will be a little different here. View through the diagrid of 53W53

Construction is progressing at about a floor a week. Completion is expected in the fall of 2018.