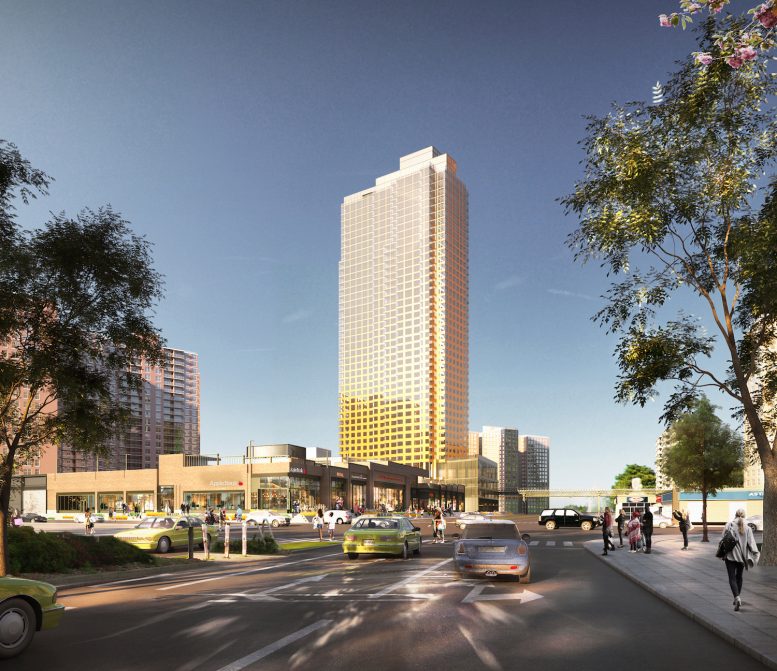 Cammeby’s is building a massive mixed-use project next to the Trump Village co-ops on Coney Island. The development, called Neptune/Sixth, has grabbed headlines because it includes a 40-story residential tower that will eventually replace Trump Village Shopping Center. Today, YIMBY has the first detailed images of the 430-foot-tall skyscraper at 532 Neptune Avenue and the office and retail buildings that will come with it. We unveiled a design from SLCE last year. S9 Architecture has taken over the design of the project, and these renderings offer an exclusive glimpse of south Brooklyn’s future tallest residential building. Plans were filed early last year for the development, which will span 752,880 square feet. It will hold 544 apartments and 511,115 square feet of residential space, plus 90,000 square feet of retail and 15,521 square feet of community facilities. The golden, gridded tower will feature an entry courtyard surrounded by a circular glass wall and a curved steel porte-cochère (essentially, a drop off point for cars). It will be the fourth and last phase of construction for the development, which is divided between two sites on either side of West 6th Street. Construction is underway on the first phase, a seven-story, 161,000-square-foot office, retail, and medical building at 626 Sheepshead Bay Road. Cammeby’s demolished a two-story strip mall—the former Royal Palace Baths—at the site between West 6th and West 8th streets last year. Now, workers are erecting the steel structure for the building, which is expected to be complete by summer 2017. Around the corner at Neptune Avenue and West 5th Street, they’re driving piles for the retail portion of the 40-story tower. The developer is housing some retailers from Trump Village Shopping Center in temporary trailers, and several others are finishing up long-term leases in their current spaces. Two of the existing stores, CVS Pharmacy and Apple Bank, have signed leases to move into the new tower.

Retail tenants and neighbors at Trump Village have not been happy about the construction. Clothing chain DII is suing Cammeby’s for $75 million in construction-related damages to its store, according to The Real Deal. Construction has “disrupted the day-to-day operations of plaintiff’s retail store and damaged plaintiff’s irreplaceable customer goodwill,” the store claims in the lawsuit.

Residents have complained about buildings shaking from excavation work, and some have worried that construction would release toxic chemicals from a manufactured gas plant that used to occupy the property. Renderings Reveal Next Phase of Neptune/Sixth at 532 Neptune Avenue in Coney Island, Brooklyn