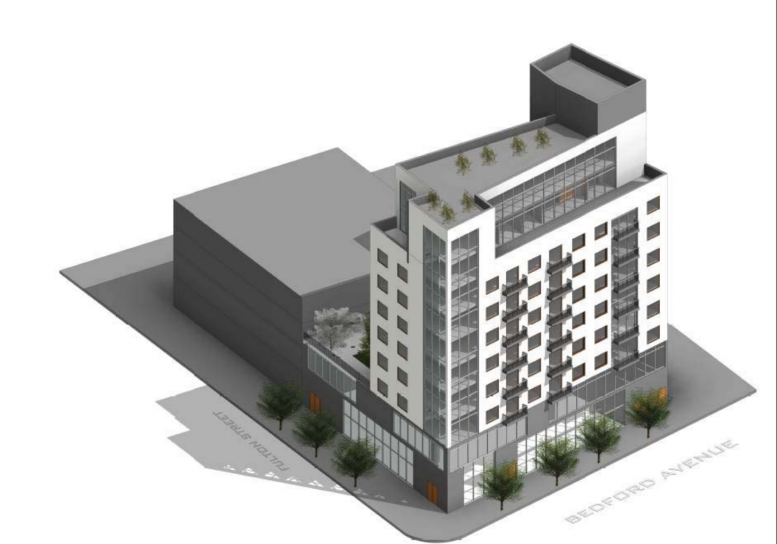 Permits were filed for a new mixed-use building in Brooklyn’s Bed-Stuy neighborhood this past spring, and now YIMBY can reveal the rendering for the project, which will rise at 1190 Fulton Street, on the corner of Bedford Avenue. The structure has also seen a slight bump in height, from eight to ten floors.

Avalon Designs is behind the design for the proposal, which is fairly spartan in its appearance. The first two floors will be mostly glass, corresponding to the 14,902 square feet of commercial space included in the plans.

Above that, the project will include 30 apartments that will divide just over 25,000 square feet of space, for a unit-average of over 800 square feet. That is very likely indicative of rentals, and the white bare-bones facade combined with windows of varying small sizes would further corroborate that presumption.

Besides the boring facade and irregular placement of windows, 1190 Fulton Street may not actually be a bad contribution to the neighborhood. Replacing derelict lots with development is never a bad thing, and the project will certainly come with a substantial retail component, which means it will put more eyes on the street. Though the design may not be of the priciest caliber, the building should still act as solid urban infill, with an envelope flush with the street-wall that compliments the surrounding fabric.

Current building applications do not account for the increase in height seen in the rendering, which means plans filed with the DOB might still be slightly out of date. In any case, with paperwork still pending, construction is likely to wait a few more months, setting up a delivery date that will likely arrive around 2020. Eddie Mizrachi of Bawabeh Brothers #2 LLC is listed as the developer.