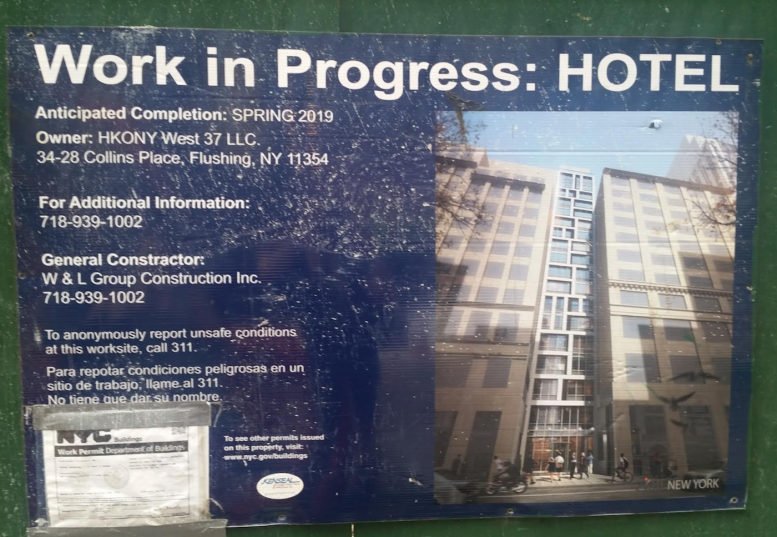 YIMBY previously reported on the filing of a job application for 11 West 37th Street back in July of 2014, when the project was first proposed. Now that the site’s old occupant has been demolished, work is fully underway, and a rendering has surfaced in the on-site construction signage.

Michael Kang Architect is behind the design for the building, which will rise 18 floors and 162 feet to its rooftop. The scope will be relatively small for a project of 18 stories, and 11 West 37th Street’s total footprint will only be 24,686 square feet, which will be divided between 68 rooms. That translates into a not-so-small 363-square-foot room average, with only three to four rooms per floor.

Design-wise, the facade of the project is actually inoffensive. White paneling will be interspersed amongst large windows of varying sizes and configurations, creating some visual variety without overwhelming the exterior. More important to the fabric of the neighborhood, the structure’s envelope is substantially withdrawn from the sidewalk, which will create an unnecessary and unattractive gap in the block’s street-wall.

The small scope of the development doesn’t exactly give much room for creativity. Given the liberties New York City’s hotel developers often take when it comes to value-engineering, this is both good and bad. Still, there are several additional hotels now rising in the surrounding blocks, and the aggregate impact of so many towers that contrast the existing built character of the neighborhood is likely to be a negative.

Completion is currently anticipated for 2019, and job applications list Meng Hua Wang of HKONY West 37 LLC as the developer, though the site was bought by Sam Chang in January of 2014 for $8.5 million.