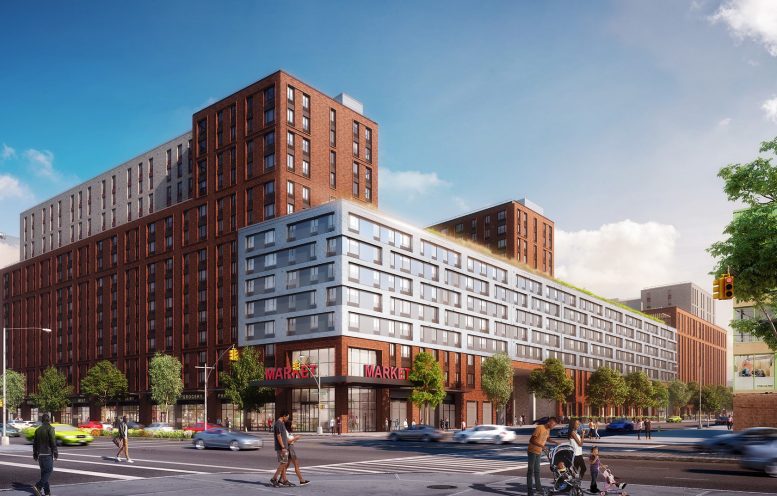 With East New York’s rezoning now finalized, YIMBY recently revealed one of the first big developments coming to the neighborhood, at 1427-1429 Loring Avenue. Permits were also recently filed for a new complex at 3301 Atlantic Avenue/250 Euclid Avenue, at the end of January. Now, we have the first rendering for that building as well, which is being designed by Dattner Architects.

The building will rise 14 floors, with 415,476 square feet in total. 20,977 square feet will be set aside for ground-floor retail space, while the remainder will be split between 403 apartments. That will translate into an average unit size of over 900 square feet, which is relatively roomy considering the entirety of the site will be affordable housing.

The site itself is very large, encompassing an entire city block. The lot spans 196,286 square feet, and occupies the area bound by Atlantic and Euclid Avenues, and Chestnut and Fulton Streets.

Importantly, the design of the building will be quite appealing, especially given the project’s affordable designation. Most of the facade will be covered in red brick, with accents in white brick and grey brick rounding out the traditionally-inspired mix. Windows appear to have inserts in the bottom that may or may not include PTAC units, but either way, the envelope of the building is fairly appealing, especially when contrast against the current state of the site. Dattner Architects has extensive experience when it comes to innovative affordable housing, as the firm was also behind Via Verde, a somewhat smaller building in the Bronx. That site was also developed by Phipps Houses, which is the same developer behind 3301 Atlantic Avenue/250 Euclid Street.

No firm completion date for the site has been announced yet, but with the surrounding neighborhood now seemingly set to boom with full-block developments all over the place, keeping in synch with the site at 1427-1449 Loring Avenue would yield a guesstimate of late 2020.