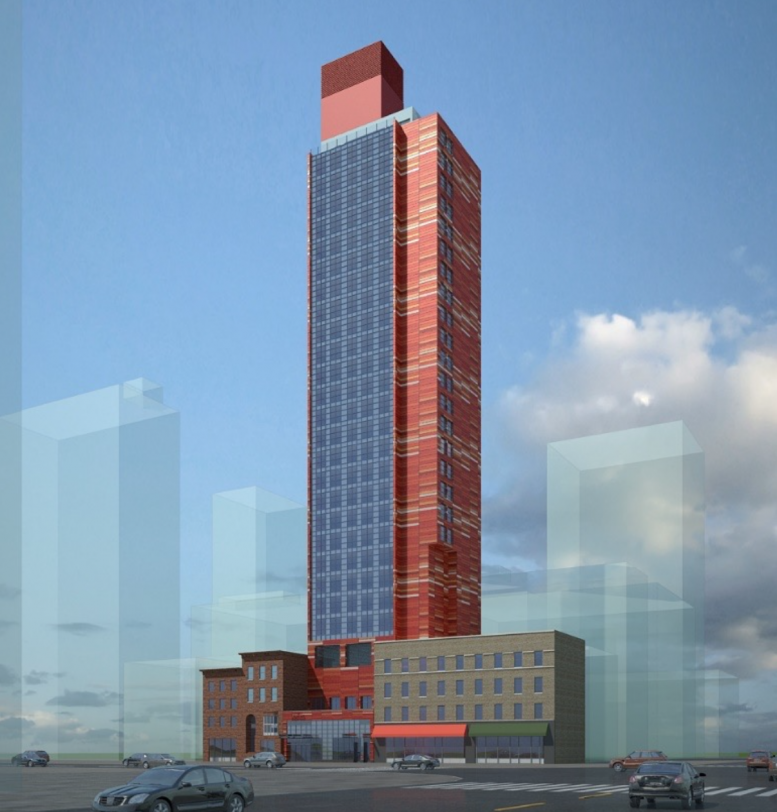 Back in May, applications were filed for a new 27-story hotel at 305 West 48th Street, between Eighth and Ninth Avenues in Hell’s Kitchen. Now, we have the first rendering for the project, which is being designed by Gene Kaufman.

The hotel will be themed around Broadway Theater, and will be occupied by a boutique brand. Permits list David Schwartz of Bright Management, Inc., as the developer, and show that the 27-story building will stand 303 feet to its roof, with 211 rooms within.

The total floor area will measure 73,096 square feet, within which 59,132 square feet will be occupied by hotel space. The building will be setback from the street, with a fairly nondescript envelope above the entrance.

A statement by Gene Kaufman describes his involvement as follows:

I embrace the challenge of helping launch a new hotel brand, an exciting undertaking that requires a thoughtful and deliberate approach from a design standpoint.  The aesthetics are critical in setting the structural and design tones for the brand, particularly as it seeks to establish itself against the backdrop of the colorful theater scene it calls home.

“Colorful” appears to be the guiding aesthetic for the plans, which will feature what appears to be a brick facade, that will flicker between a predominant red, and bits of yellow. The surrounding density means that regardless of facade choice, the hotel should be relatively invisible.

The Rockwell Group will be designing the interiors, and amenities will include a 27th floor rooftop lounge, a terrace on the second floor, a rear garden on the ground level, and a bar/lounge in the cellar.

No official completion date has been announced, but a 2020 estimate would not be unreasonable.