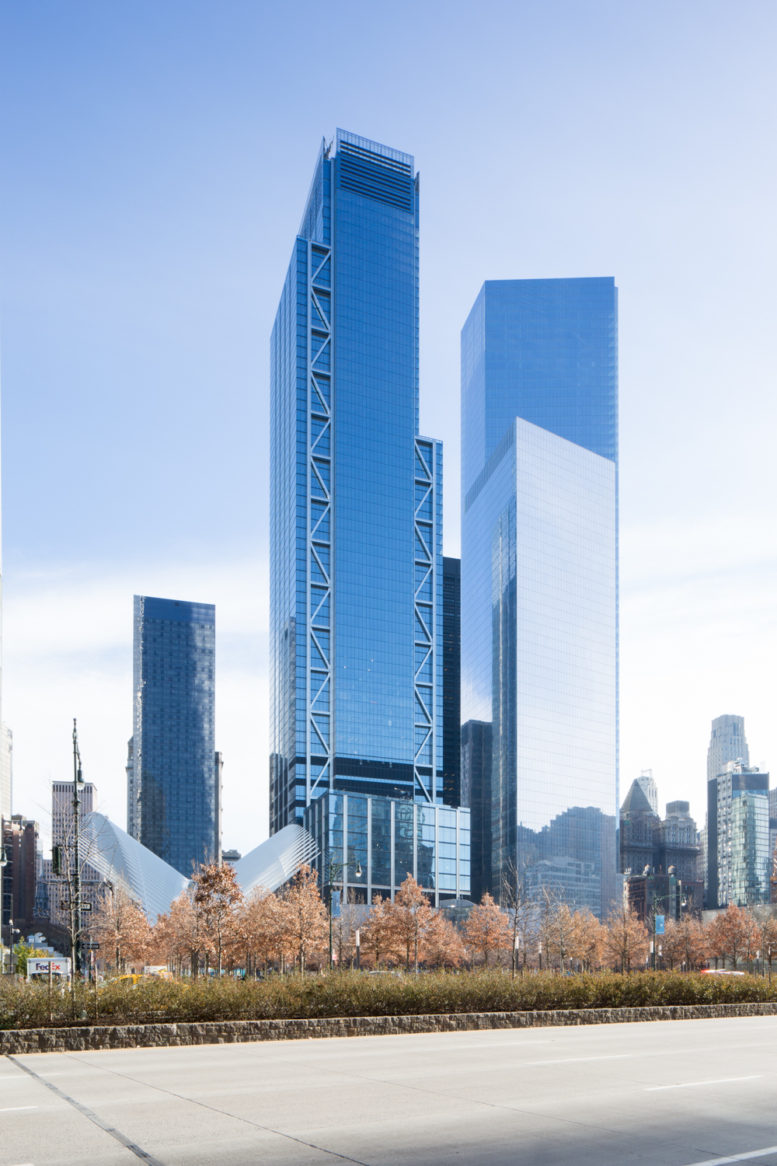 Last week, YIMBY was taken on a tour of 175 Greenwich Street, aka 3 World Trade Center, visiting the rooftop, the terrace, and the lobby. The building, located in the heart of the Financial District, has made incredible progress, with the façade now complete save for windows connected to the exterior hoist. Interior work is also approaching the finish line. 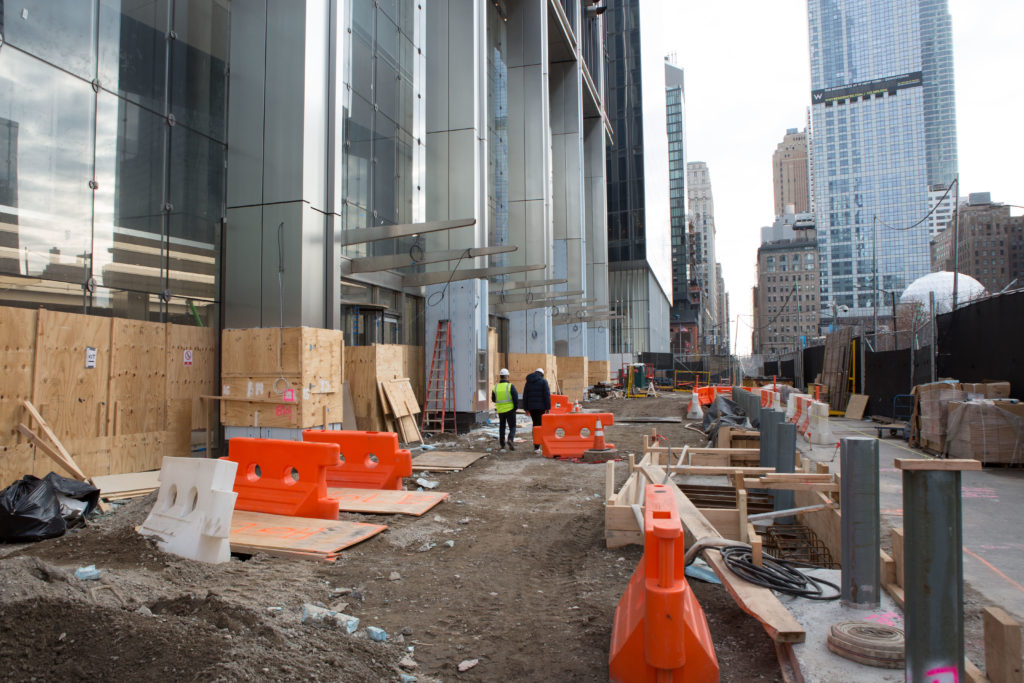 Despite the dirt ground right outside from the building’s entrance, the lobby is nearly complete. Finishing touches are being put into place, with the reception counter now visible.

At the center of the reception space is an illuminated band of marble, which appears similar to the material that is to be used for the World Trade Center’s Performing Arts Center. Silverstein Properties is responsible for the development. 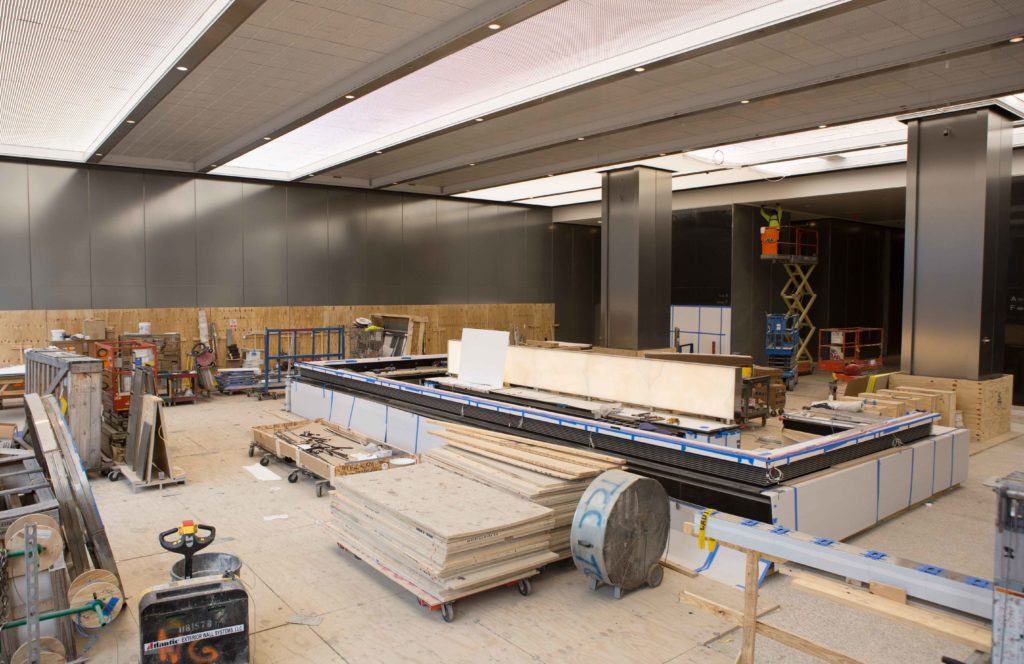 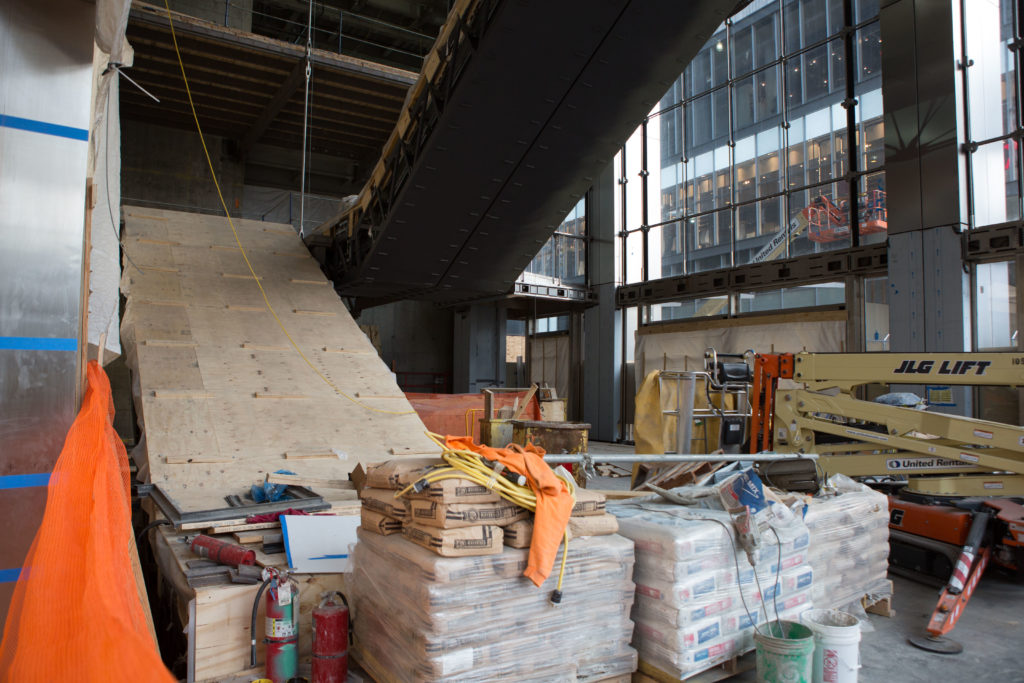 The tower is expected to be complete before the end of the year, at which point it will deliver 2.5 million square feet of office space. The building is extraordinarily sturdy, allowing for column-free workspaces and high ceilings, and Rogers Stirk Harbour and Partners is responsible for the design.

175 Greenwich demonstrates a restrained but attractive exterior, with a load-bearing chrome-finished steel frame extending from the lowest terrace to two upper-floor terraces. While it’s not quite as daring as some of the designs currently being built in Asia, it does stand out from its Manhattan contemporaries. 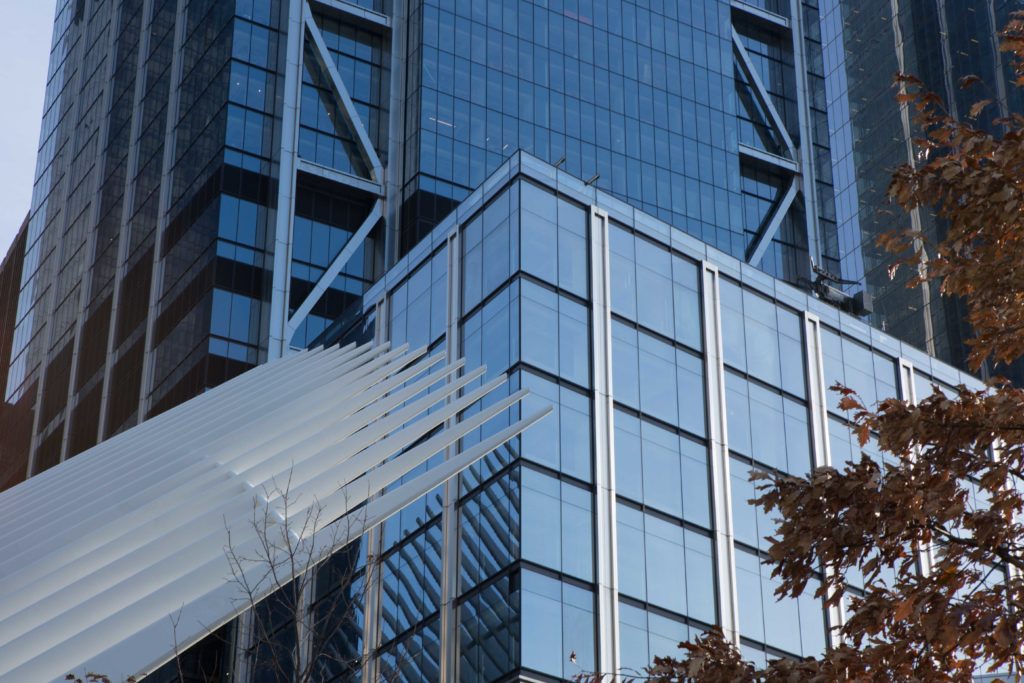 It takes a while for the exterior hoist to reach the top floors on the site, but once there, the views are the spectacular kind one would expect from the top of a supertall. 3 World Trade Center has a pinnacle at 1,080 feet above street level, totaling 80 stories. Its shockingly immediate neighbor, One World Trade Center, has a rooftop height of 1,368 feet, and architectural height of 1,776 feet. 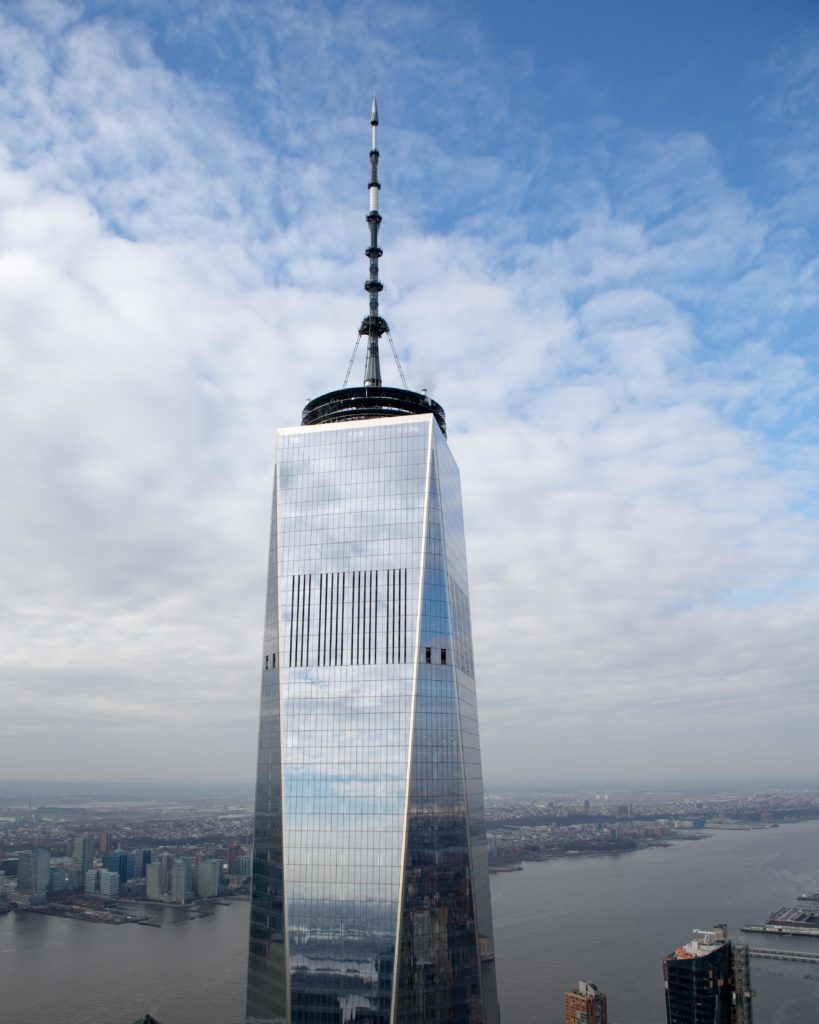 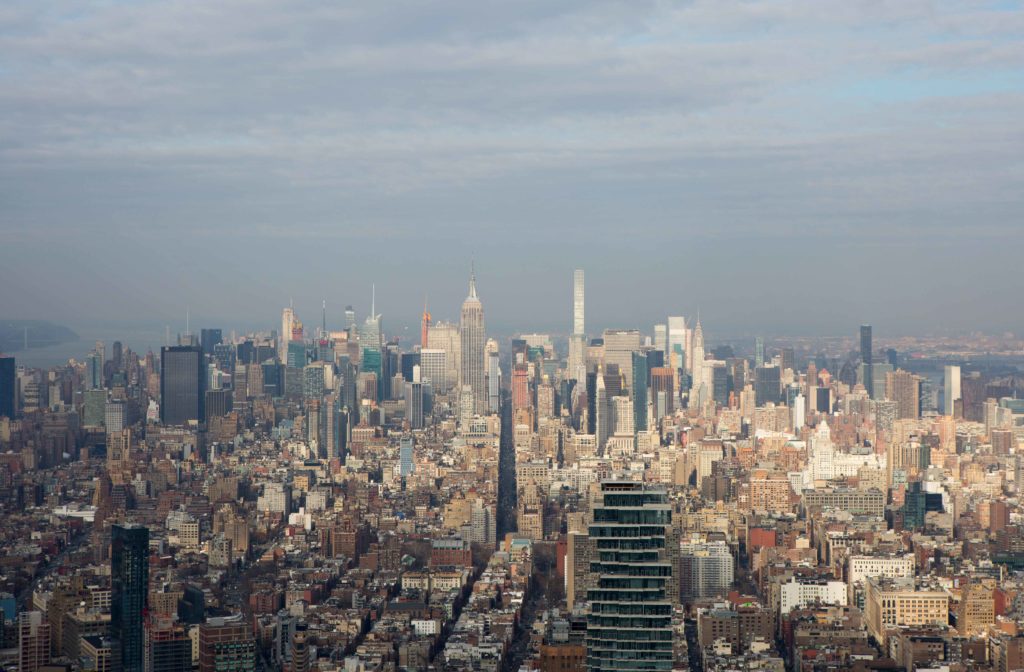 Looking towards Midtown from the top of 3 WTC, several major new developments are clearly visible. The tower is lined up perfectly to see down Fifth Avenue from Washington Square Park, along Central Park, and ending at Marcus Garvey Park. 432 Park Avenue, designed by Rafael Viñoly stands ever-present, and The Empire State Building is still mostly unobscured. 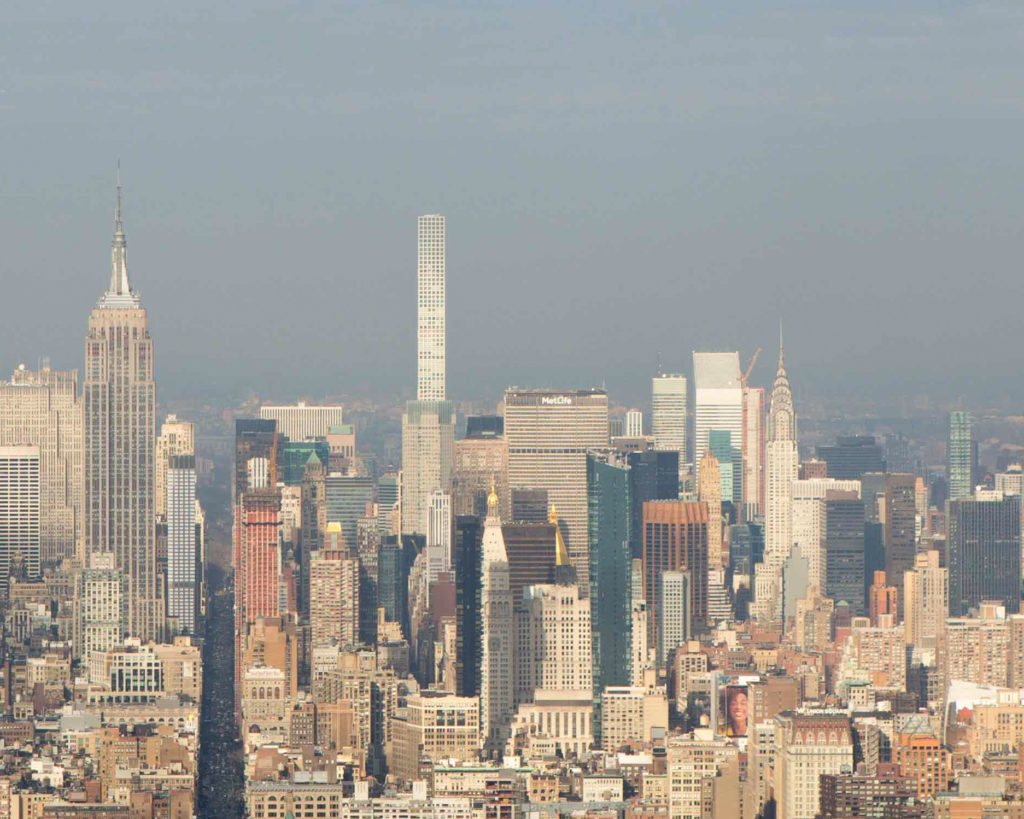 Below the ESB and to the east is 277 5th Avenue, another Viñoly-designed tower. Construction there is nearly topped-out, with move-ins expected by the end of the year.

Further east, between the Chrysler Building and the Triangular Citi Group Center, is 138 East 50th Street, designed by Pelli Clark Pelli. The southern façade installation on the topped-out tower is now rising above its surroundings, more than halfway up the project. 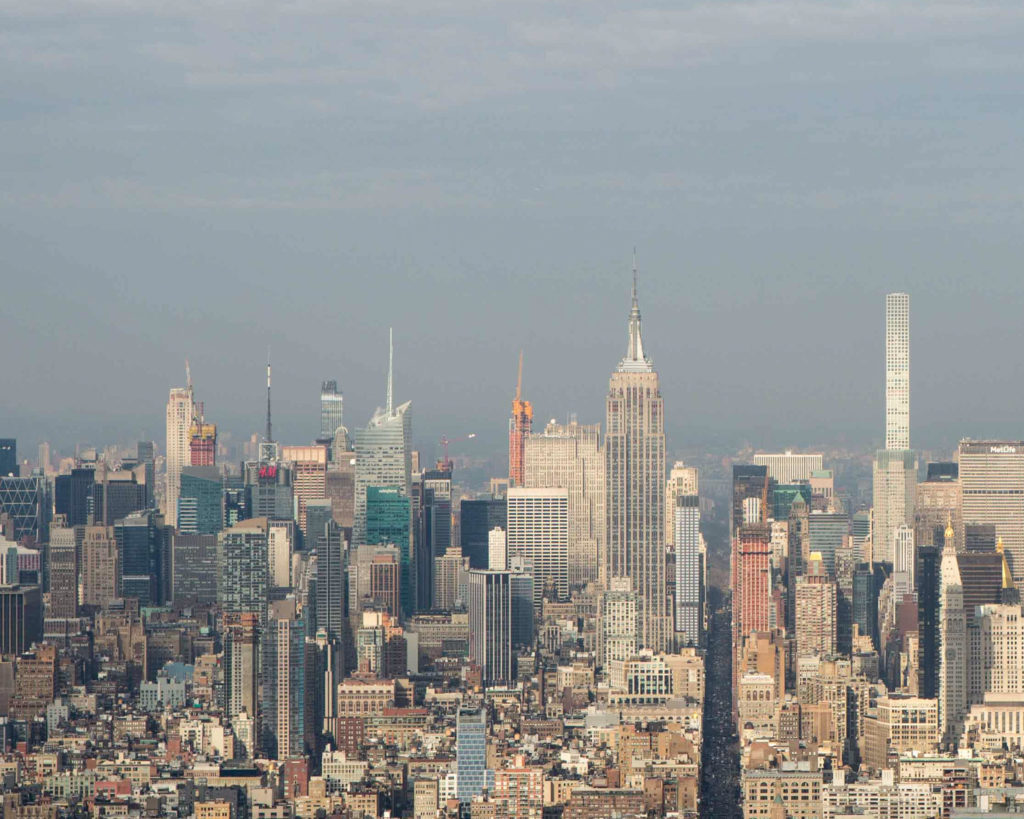 The west of the Empire State building is 53 West 53rd Street, where the concrete skeleton of its peak looks to be nearly topped-out, as we reported in January. A small section of its façade is also visible. Completion is expected by the end of the year.

Between 53W53 and the Bank of America building, 111 West 57th Street is just starting to make an impact on the city’s skyline. The construction site has seen steady progress, and will likely see completion is late 2019 or 2020.

Finishing the 57th Street supertall construction update is Central Park Tower, seen in front of Robert A.M. Stern’s 220 Central Park South. Right now, Stern’s design appears to be just nine stories above its neighbor. While the pair are currently close in height, 217 West 57th Street still has about half of its height left to gain. Completion is expected by 2019. 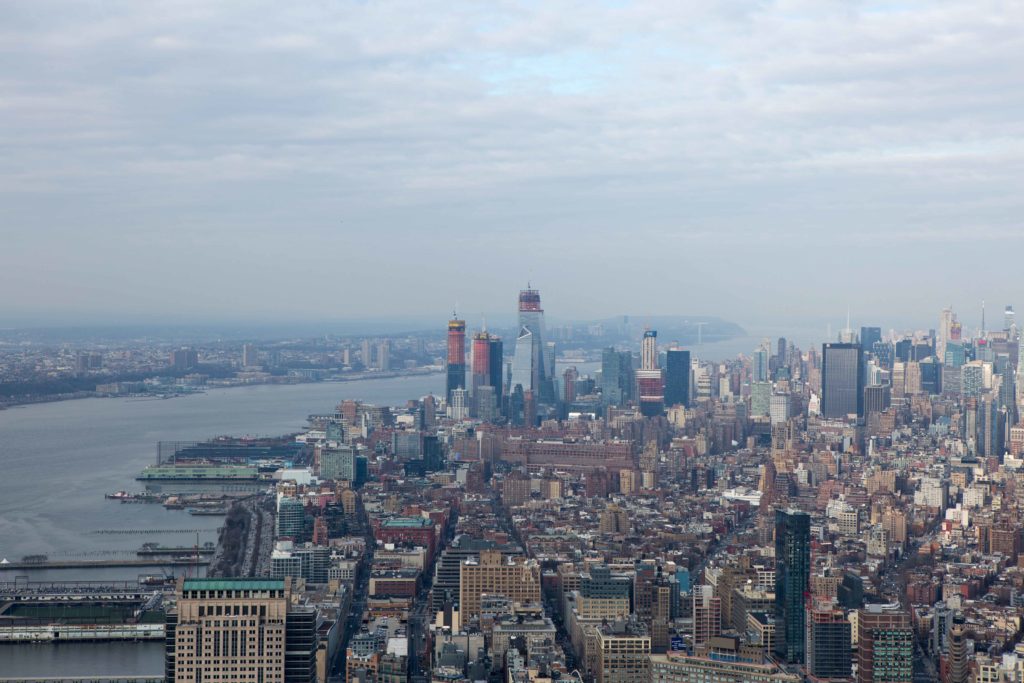 Hudson Yards’ meteoric rise is also becoming increasingly prominent. The centralization of the blue-glass skyscrapers has an exclamation point in 30 Hudson Yards, which appears to be close to topping-out. It’s probable that less than a handful of floors are left, and we anticipate that the observatory platform will be installed within a month or two. 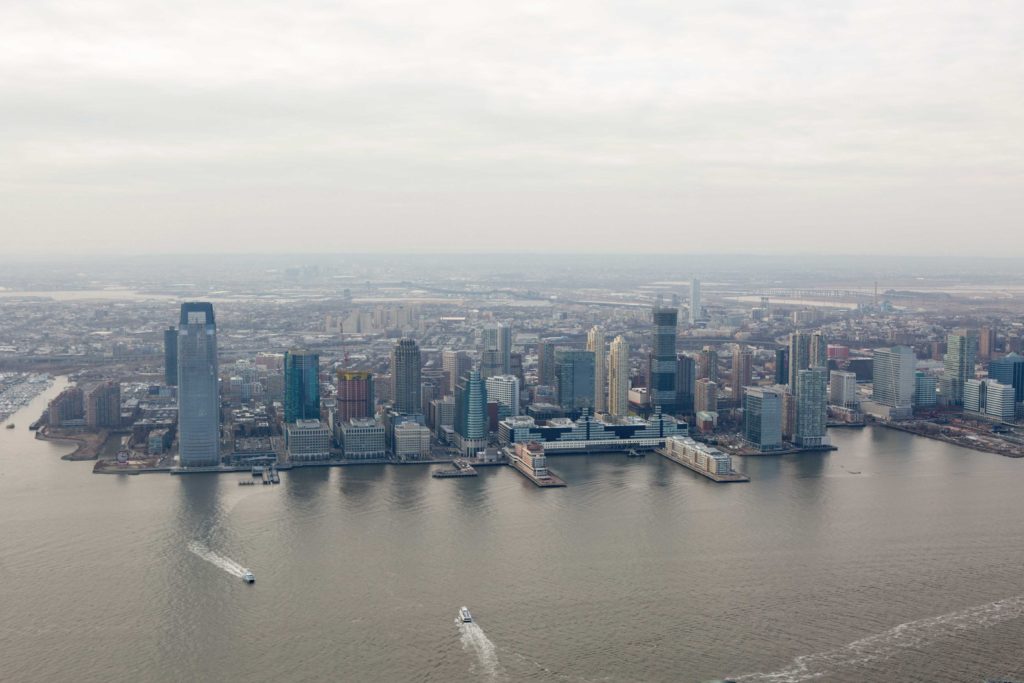 Across the Hudson River in New Jersey, the Perkins Eastman-designed 99 Hudson Street is starting to make an impact, with construction appearing to approach the halfway point. Right now, it is hovering around 35 to 40 floors. The eventual 900-foot tall tower will rise up 79 stories, and create 781 new residential units. 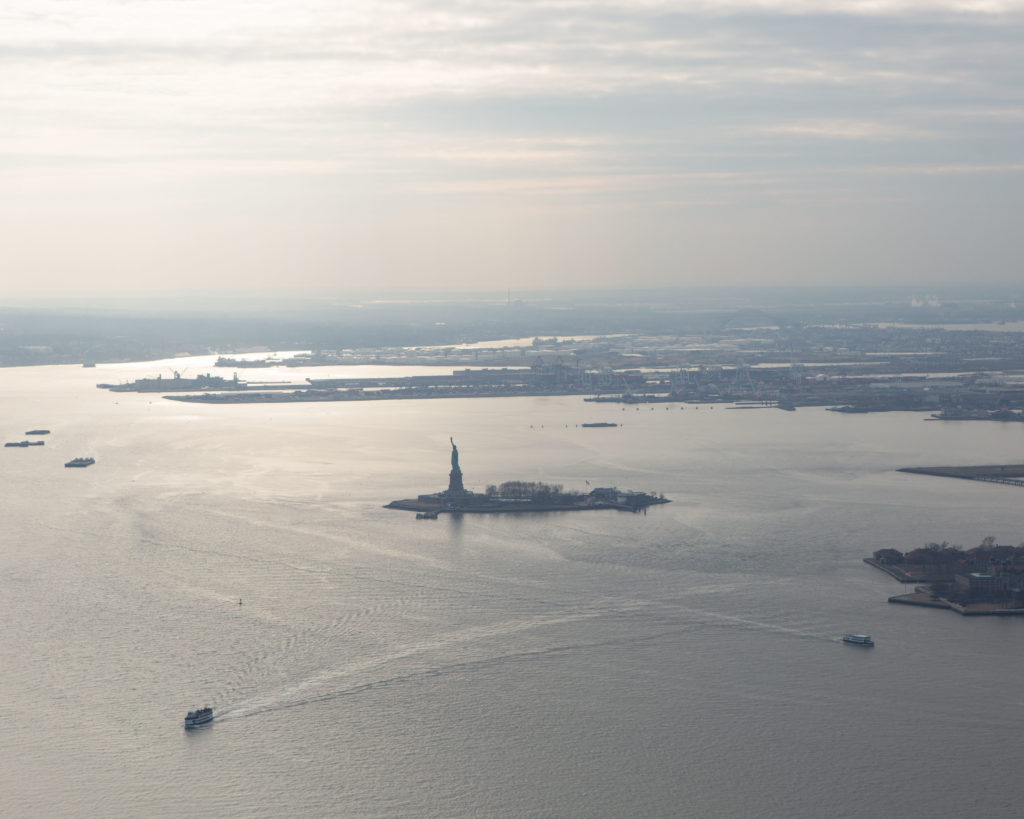 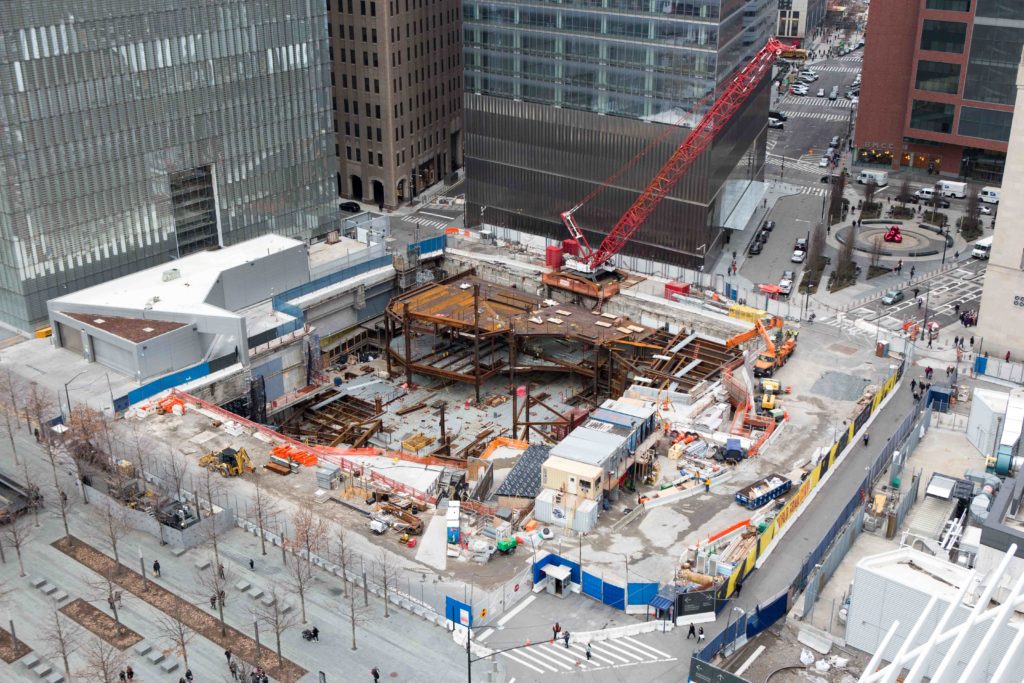 A visit to the terrace revealed a close-up view of the Oculus, as well as an aboveground check on the Ronald O. Perelman Performing Arts Center construction site. As we reported at the beginning of this week, Governor Cuomo has announced that construction will resume, after being stalled for several months. YIMBY first noticed the lack of activity in December 2017. Construction on the below-grade structure is nearly complete. 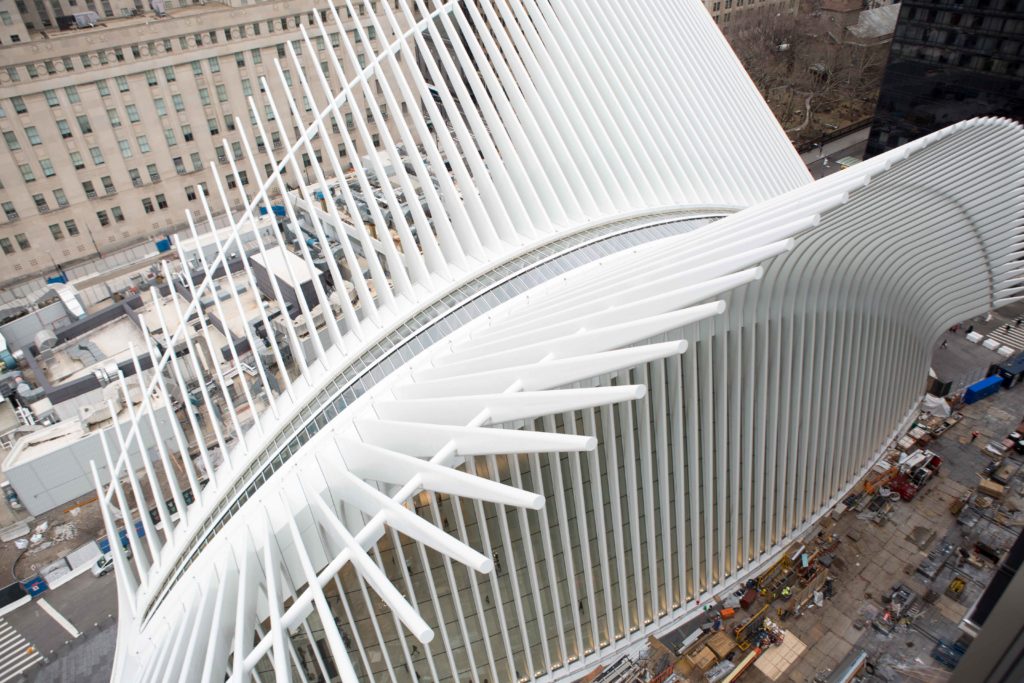 The cultural significance of the World Trade Center’s redevelopment goes far beyond the city, and is a symbol of the country’s healing after the site’s previous devastation. The re-imagined neighborhood honors that legacy and holds higher than ever the American values that were attacked back in 2001. 175 Greenwich Street is filled with optimism and spirit, with a conscious effort towards transparency and sustainability, according to the developers.

The tower is expected to receive LEED certification. The most notable lease for the site to date is GroupM, a media investment management group, who signed on to occupy roughly 700,000 square feet across nine floors at the base of the tower for the next twenty years. 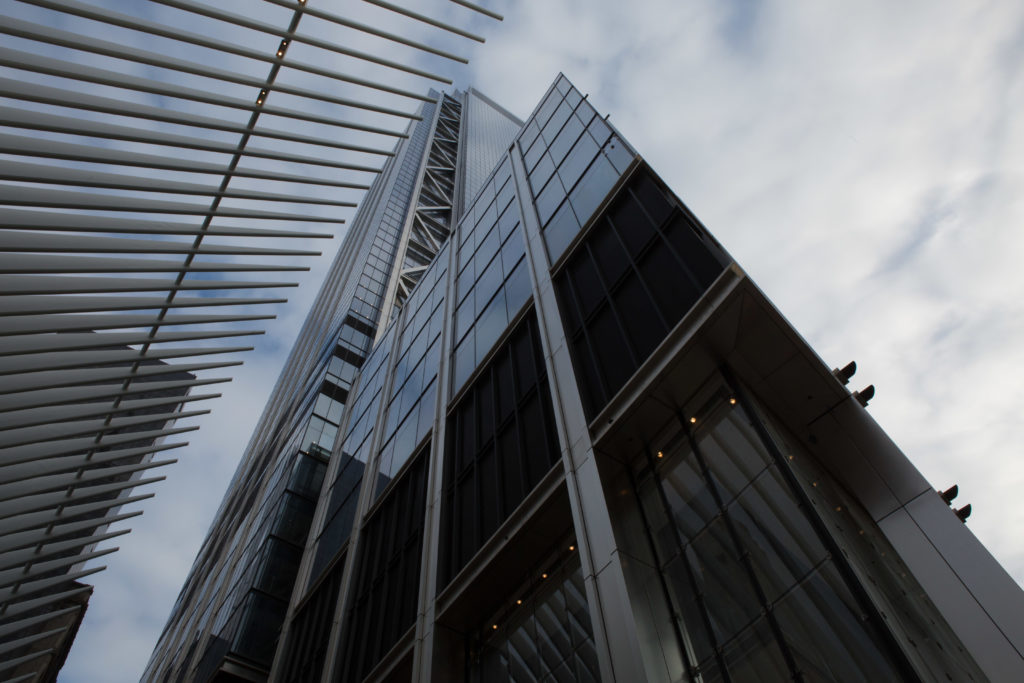 Completion is expected later this year.