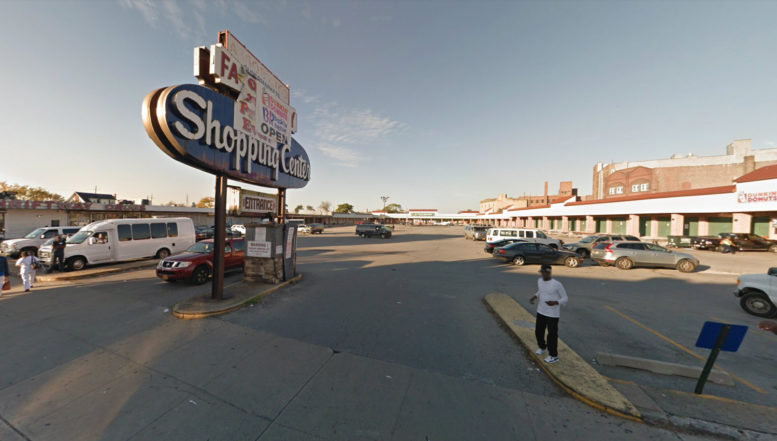 Permits have been filed for a 12-story mixed-use development at 1725 Village Lane, in Far Rockaway, Queens. The site will be a re-imagining of the mostly-abandoned Far Rockaway Shopping Center.

AmNewYork’s Lisa Colangelo reported on the expected positive impact of the project, saying, “Far Rockaway’s biggest eyesore is finally getting the makeover it deserves.”

The massive center was built in the 1960’s, at the tail end of car-centric Robert Moses’ control over New York City. The site is located across the street from the Far Rockaway Mott Avenue Station, last stop for the A trains in Queens. Mott Center LLC will be responsible for the development.

The 125-foot tall complex will yield 298,080 square feet, with 217,260 square feet dedicated to residential use, and 38,180 square feet for commercial-retail space, which will include three retail bays and a grocery store. 295 parking spaces will be created, including capacity for 198 vehicles below grade. 226 apartments will result, averaging 961 square feet apiece, which could suggest rental or condominium use. Tenant recreational space will be available on the second and tenth floor.

The new development, dubbed “The Far Rockaway Village,” is expected to rehabilitate the ailing neighborhood, mainly by removing the poorly-planned center. City Councilman Donovan Richards, who has worked on revitalizing the downtown area for several years, said in an interview with amNewYork, “No more false starts. This is a new day.” The Councilman had also described the project as including 700 apartments, and 90,000 square feet of commercial retail space.

The permits pre-filed today fulfill roughly a third of that promise, suggesting more to come, and Marvel Architects will be responsible for the design.