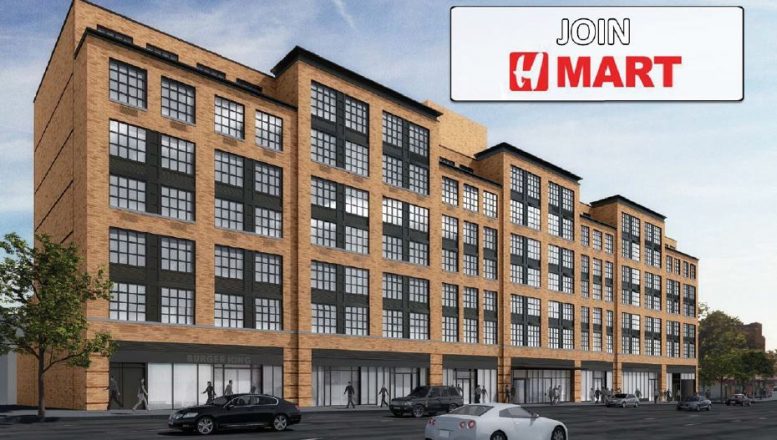 The Queens neighborhood of Flushing is in for yet another new development at 144-74 Northern Boulevard, where a seven-story apartment complex with 100 residential units and ground-floor retail will soon rise. Sabre Real Estate Group is the developer of the project, and Ismael Leyva Architects is the designer. YIMBY first reported on the site when applications were filed late last year, and today, we have the first renderings.

H Mart, a Korean supermarket chain with most of its locations in New York, New Jersey and California, will be the main retail tenant along with a Burger King, which originally stood by itself on the site and was demolished to make way for the new building.

There will also be an additional 2,250 square feet of available retail space that comes with a partial basement that  separates the two stores. An underground parking garage will be present and accessed through a ramp just off of Northern Boulevard.

Up top, the residential component will total almost 70,000 square feet. There will also be approximately 23,000 square feet of community facility space.

The building will have a light brick facade with large industrial-style windows that face the street, with four separate setbacks on the seventh floor, most likely for units that have private terraces. The main lobby will be located in the middle of the front elevation along Northern Boulevard.

5 Comments on "Renderings Revealed for Apartments and H-Mart at 144-74 Northern Boulevard, Flushing, Queens"