Located in the West Village, and bound by West 10th Street, Washington Street, and Greenwich Street, a new proposed expansion for the Village Community School is currently being reviewed by the Landmarks Preservation Commission. Approval would potentially bring a four-story addition, designed by Marvel Architects, to the eastern side of the property, at the corner of West 10th Street and Greenwich Street. The corner is currently the site of the school playground, originally built in 1945. The school and project site are located among two historic districts in Greenwich Village, sitting on the southwest corner of the established areas. 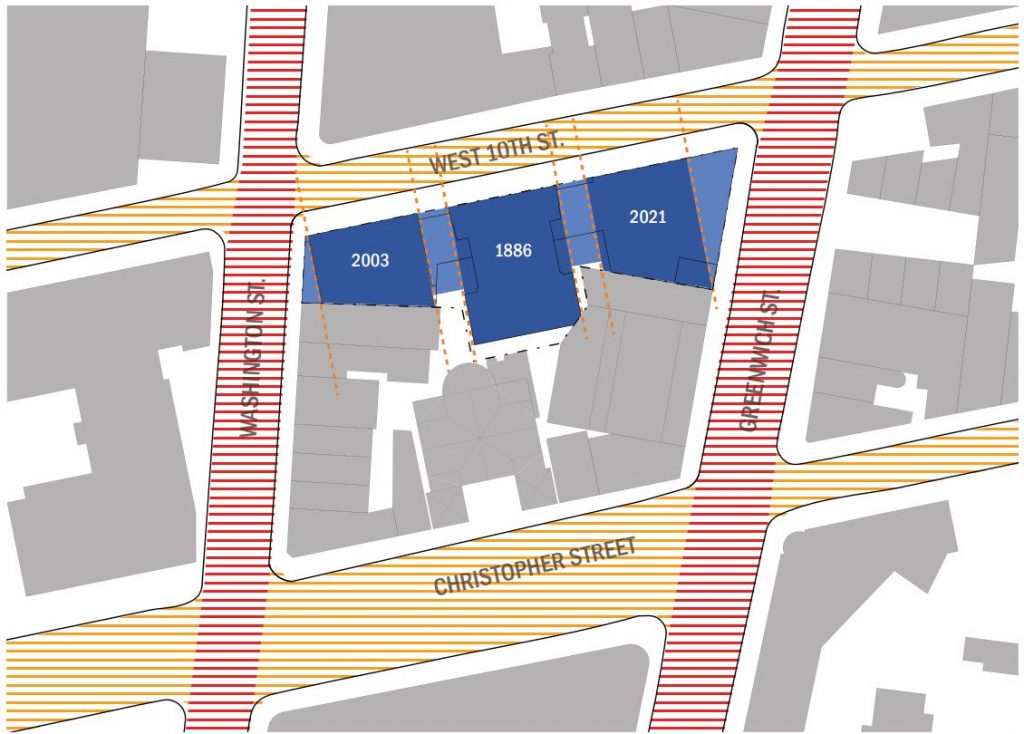 The project site divided according to year of building completion. Diagram by Marvel Architects

The current elevation of West 10th Street without the new expansion. Diagram by Marvel Architects

The current elevation of West 10th Street with the new expansion. Diagram by Marvel Architects 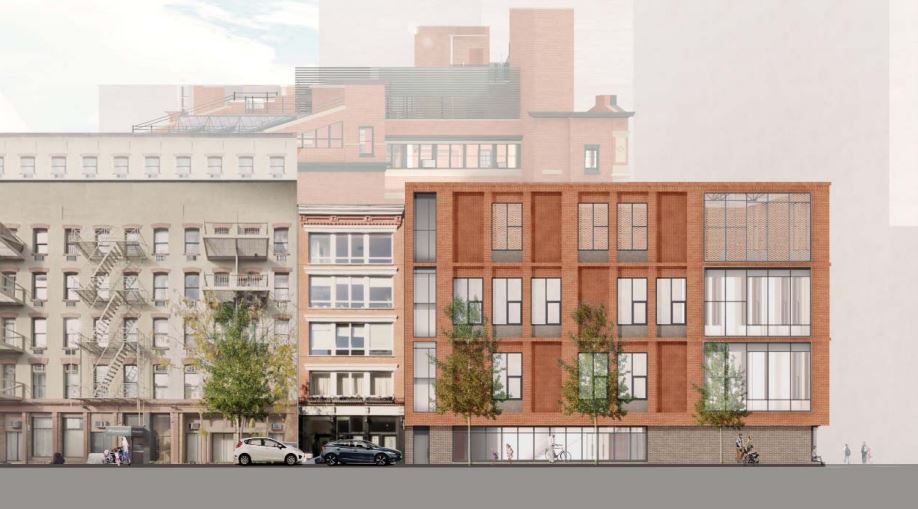 The original school in the center of the property was built in 1886, while the first Village Community School addition sits on the western edge of the site, completed back in 2003.

Fifteen years later, the new proposed expansion would rise from the site of the playground. It would include a double-height gymnasium spanning the cellar level and ground floor, the main lobby and a wood shop on the first floor, a library and technology center with a STEM lab on the second floor, three new classrooms with a lab room and a science room on the third floor, and a rooftop play area on the fourth floor, with a full basketball court. New offices will be spread among the cellar, second and third floors. 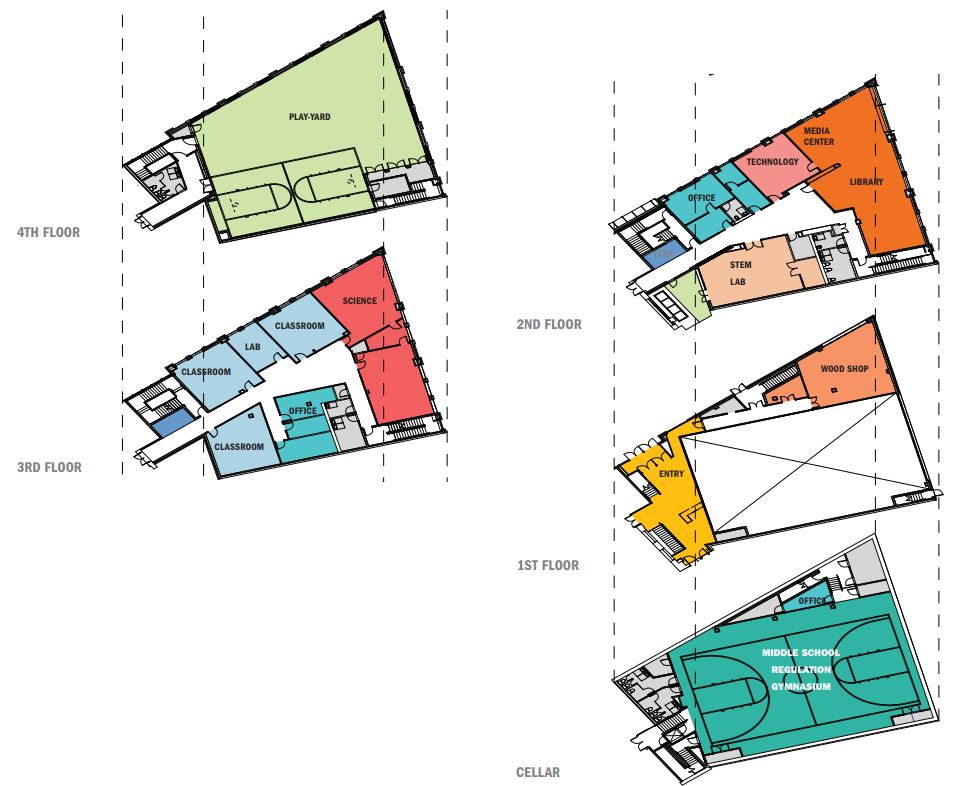 Overall, the massing and height of the new addition is actually lower than the two current buildings of the Village Community School. From the street, the structure is sealed with a mixture of red bricks and varying masonry running bonds that match in color, but add diverse textures in conjunction with the existing historical finishes of the original school. Stainless steel frames with a brass finish would hold each vertically rectangular window. Windows on the northern edge of Greenwich Street would be floor-to-ceilings, optimizing views looking down West 10th Street and capturing greater daylight exposure for the library and science rooms in the morning and early afternoon. 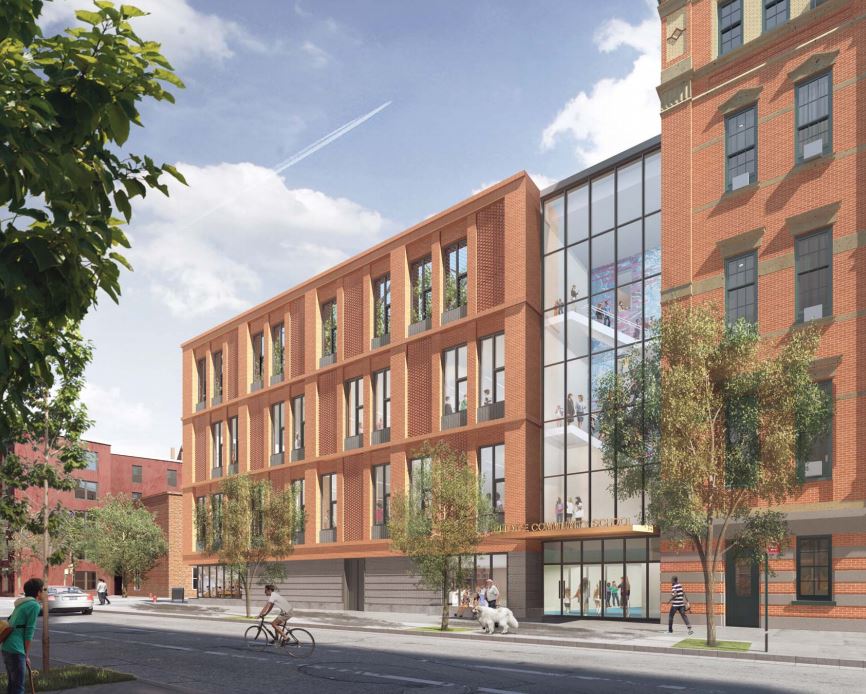 The new structure would be connected to the central school building with a multi-story atrium, enclosed with a wall of glass that bridges old and new with new staircases. This would be part of the new main entrance to the addition, and would be covered with a canopy over the main doors along West 10th Street. Additional work and renovations to the top of the old school building are also anticipated.

272 West 10th Street’s plan for expansion is being reviewed today. If approved, the project could be completed as early as 2021.