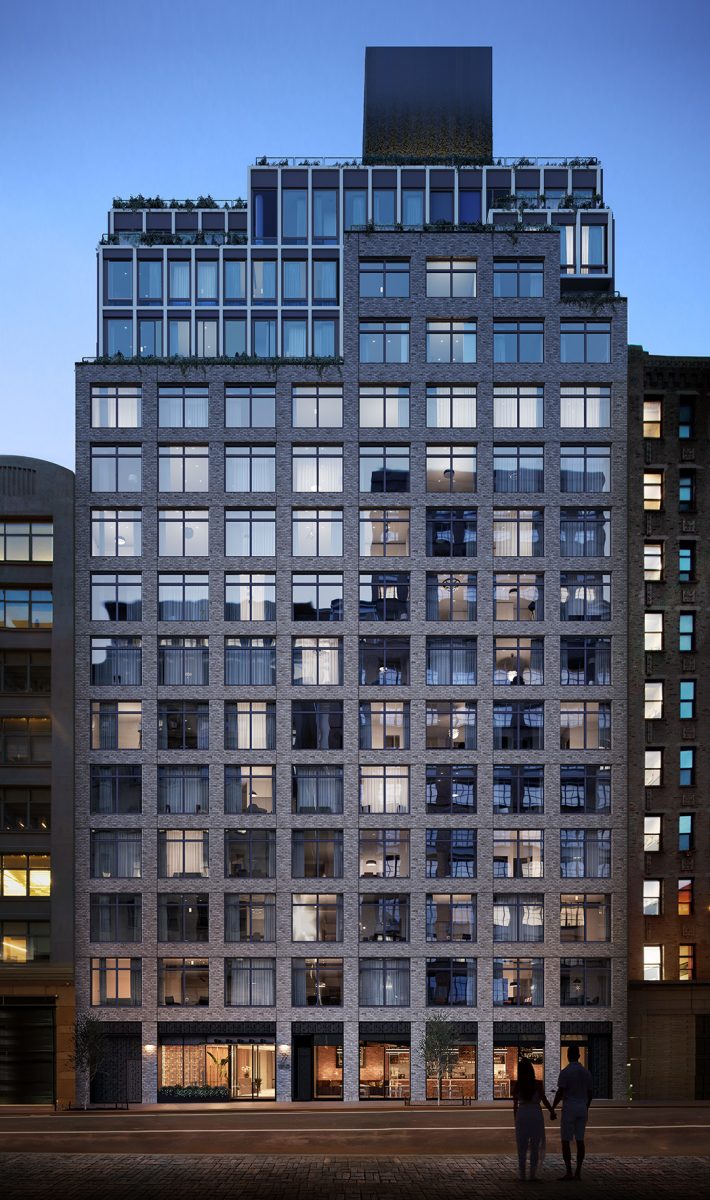 YIMBY recently interviewed David Von Spreckelsen, President of Toll Brothers City Living, and we discussed the range of the firm’s current projects, from the OMA-designed 121 East 22nd Street, down to their newest building at 77 Charlton Street.

What projects is Toll Brothers City Living working on at the moment within the Five Boroughs?

Within the five boroughs, we have seven projects in various stages of development, with six being in Manhattan and one in Brooklyn. Essentially complete are 100 Barrow, a co-op in the Greenwich Village Historic District designed by Barry Rice Architects, where we recently sold out and nearly everyone has moved in; 55 West 17 Street, a condo in Chelsea/Flatiron District designed by Morris Adjmi, with three residences remaining for sale; and Pierhouse/1 Hotel in Brooklyn Heights designed by Marvel Architects, the building has two remaining condos for sale and a 192-room hotel in its second full year of operations.

We also have The Sutton, a condo building at 52nd Street and First Avenue that was designed by Incorporated and Hill West. We are modifying the top of the tower after a buyer defaulted on a very large penthouse by creating four new residences there, with three fully renovated and one left white-box for someone to create their own unique space. These residences all have floor to ceiling windows, high ceilings, and incredible views. Just the white box residence remains to be sold. 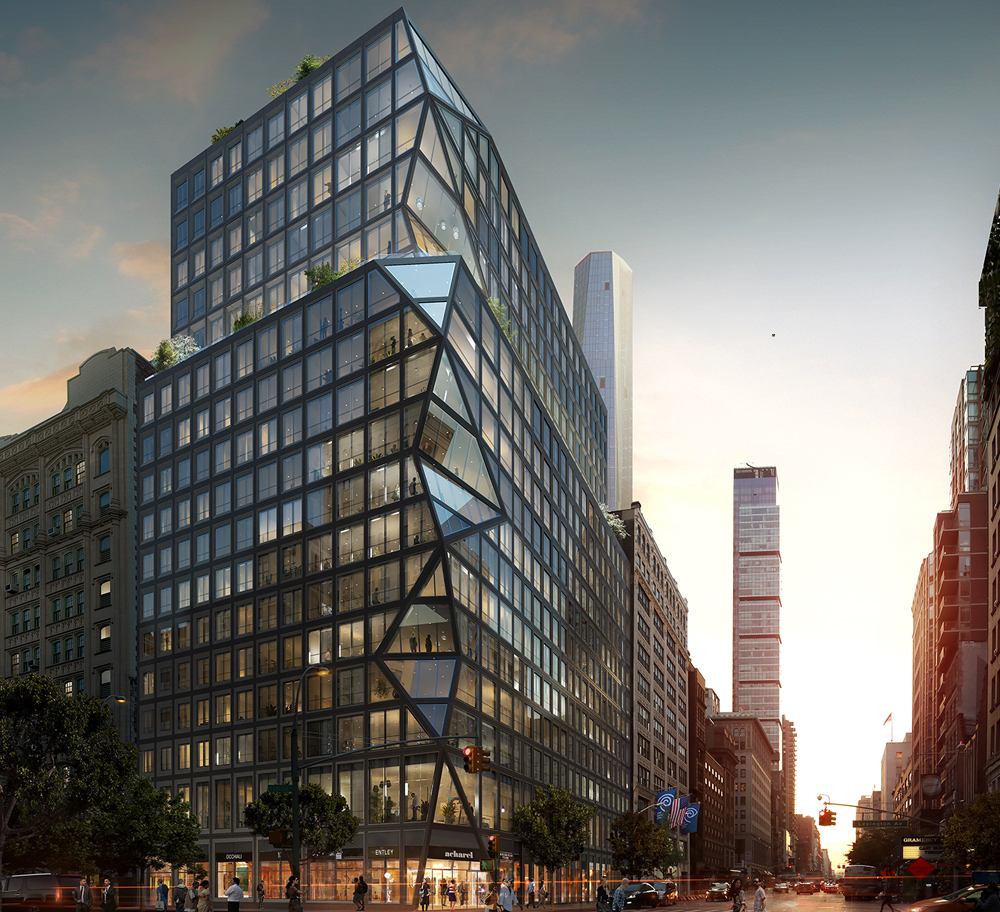 Can you describe what considerations went into designing 121 East 22nd Street?

When we purchased the United Cerebral Palsy building on 23rd Street between Park Avenue South and Lexington Avenue, we knew that because 23rd is a wide street, our building would be quite visible. We wanted to do something architecturally significant there. To enhance this visibility and make for a better development site, we later purchased the corner of 23rd Street and Lexington Avenue. We also knew that the zoning at this location was rather restrictive – there’s a constant street wall requirement, then you go up 150 feet, set back 10 feet, and go up another 60 feet – and we needed to bring in a very creative team to push these parameters as much as possible while still moving forward quickly to obtain a building permit and get under construction.

In selecting an architect, I had a few goals in mind. I wanted a firm that was not overexposed in New York City, but had international renown for its creativity. Experience informed me of the importance of this firm having an office in the United States, preferably New York City. OMA fit these requirements perfectly. While Rem Koolhaas wrote extensively about New York City as early as the 1970s, the firm he founded had not yet done a building in New York City. Yet, they had a sizable office here.

With OMA, we crafted a building (really two buildings because of the through-block nature of the site) with great detail in its precast stone façade and as much street wall movement as possible within zoning limitations that has resulted in a building of subtle elegance. It is a modern, dark stone building that completely surrounds the traditional, light stone School of the Future building on the corner of Lexington Avenue and 22nd Street. I love the juxtaposition of the two buildings when viewing the site from the southeast.

What are the unique features of 121 East 22nd Street?

Beyond the architecturally interesting corner at 23rd Street and Lexington Avenue and the facades of 23rd Street and 22nd Street being related but rather different, I would say that the courtyard is quite unique. Given the through-block nature of our site and the neighboring buildings that surround us, the courtyard is a very defined space. It has a European feel and we played off this by creating outdoor balconies or terraces for just about every residence that faces the courtyard. The goal is to create a real sense of community within the building in this courtyard space which we have anchored with beautiful landscaping, art, and amenities. Within the three levels of the courtyard and the space that directly abuts it are the main building lobby, a large residents’ lounge with a full bar and kitchen and rooms that can be made private, a screening room, a children’s playroom, a swimming pool, a fitness center, and an automated parking system that is separated from the amenity spaces by glass walls, making the automated garage’s operations visible.

Are you working on City Living projects beyond the five boroughs?

Yes, I am involved in the design and marketing of our New Jersey projects which include Jersey City, Hoboken, and West New York. In addition, we are looking forward to potential projects in Philadelphia, Los Angeles, and Seattle in which I am directly involved. We are also looking to expand in other markets across the country and I look forward to participating in those endeavors as well.

What’s happening with your pipeline in Jersey City?

In 2006, Toll purchased the Manischewitz site in Jersey City which had been home to a matzoh factory. We rezoned the property in preparation for a large condominium development of up to 950 residential units. As we were about to proceed with the development, there was concern about the depth of the condo market. But we had recently started to expand Toll’s rental business nationally and we decided to develop the first building at the site, which we now call The Morgan, as a rental apartment building of 417 units. The second building, 10 Provost Street, is a 242-unit condo building. It is nearing completion and has begun occupancy. The third building includes 259 condo units, 12 live/work lofts for certified Jersey City artists, a public plaza, and a 17,000 square foot performing arts center that includes a theater for performing arts, exhibition space, classrooms, and rehearsal space. We are just getting underway with this building. The fourth and final building is still in the planning stages.

Your next project in Hudson Square appears to be starting foundation work. Does the pace of the neighborhood’s impending and ongoing transformation surprise you?

In general, though, I am not surprised with the pace of change of former industrial/commercial neighborhoods that are rezoned for residential or mixed uses that have locational advantages like good transportation access or adjacency to strong neighborhoods, waterfronts or parks. Just look at how places like DUMBO, Williamsburg, and Long Island City have quickly blossomed (even given the interruption of the deep recession we experienced about ten years ago). West Soho abuts some of the most desirable neighborhoods in New York City, Soho (proper), West Village, and Tribeca; is close to Hudson River Park; and has good subway access. The 1 train stops right on our block! I’m excited with the recent announcements from both Disney and Google to develop new headquarters in Hudson Square. Between Disney’s 1.2 million SF development at 4 Hudson Square and the 1.7 million SF “Google Hudson Square” campus, we can expect to see an influx of almost 20,000 diverse and world-class talented employees in the next few years. Retail, services, and restaurants catering to this audience along with all the new area residents should only continue to get stronger to further enhance this burgeoning live/work/play neighborhood.

Can we ever expect a skyscraper from Toll Brothers City Living that isn’t across the Hudson?

I believe we already have. 400 Park Avenue South, which we developed jointly with Equity Residential, is 40-stories and about 450 feet tall. Our tallest building on the other side of the Hudson is 383 feet tall at 10 Provost Street in Jersey City. Presented with the right opportunity, we will hopefully exceed the height of 400 Park Avenue South one day soon.