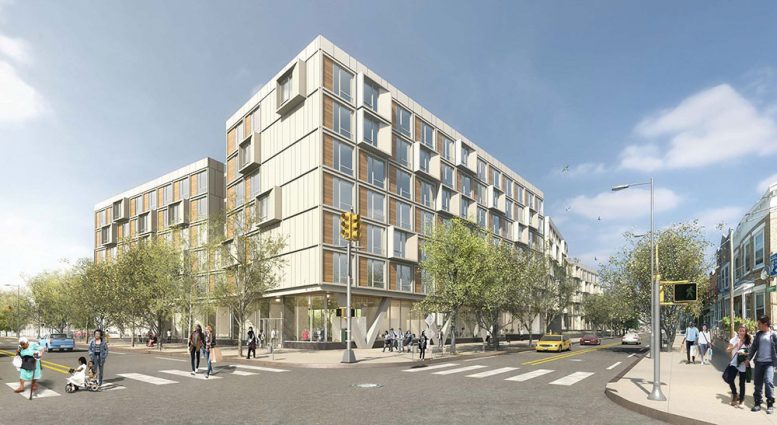 The Department of Housing Preservation and Development (HPD) has announced plans to build a 167-unit modular housing block in East New York, Brooklyn. From Think! Architecture and Design, the building includes a mix of studios, one-, two-, three-, and four-bedroom units. In addition to a large community area, there will also be a new medical clinic and supportive services for homeless New Yorkers.

The development team also includes Thorobird Companies and Bangladeshi American Community Development and Youth Services, a non-profit organization that focuses on improving the lives of immigrants, women, and low-income residents primarily of Bangladeshi descent. FullStack Modular, a Brooklyn-based company, will oversee fabrication of the modular units for 581 Grant Avenue.

Modular construction can be compared to a set of Legos. The building blocks, or modules, are manufactured offsite in a temperature-controlled warehouse and often include a portion of the facade and exterior cladding, MEP components, and window systems. The modules are then shipped to the building site, hoisted by crane, and assembled one by one.

In theory, modular design should reduce construction cost, project timelines, and site displacement, because the majority of construction has already taken place. A high-profile example of a successful application of this construction method is citizenM New York Bowery Hotel, which is now the tallest modular hotel in the United States. On the other hand, 461 Dean Street in Pacific Park, Brooklyn is a prime example of how it can completely derail a development and contribute to millions of dollars in cost overruns and litigation.

HPD, FullStack Modular, and the development team are optimistic the project will end up a success.

“FullStack Modular is honored to be chosen by the City of New York to help prove the efficiency and cost predictability that modular housing can bring,” said FullStack Modular founder and CEO Roger Krulak. “We are also proud to be part of an all-star NYC-based development team with deep roots in Brooklyn, and are excited to have a factory humming with good-paying jobs for New Yorkers.”