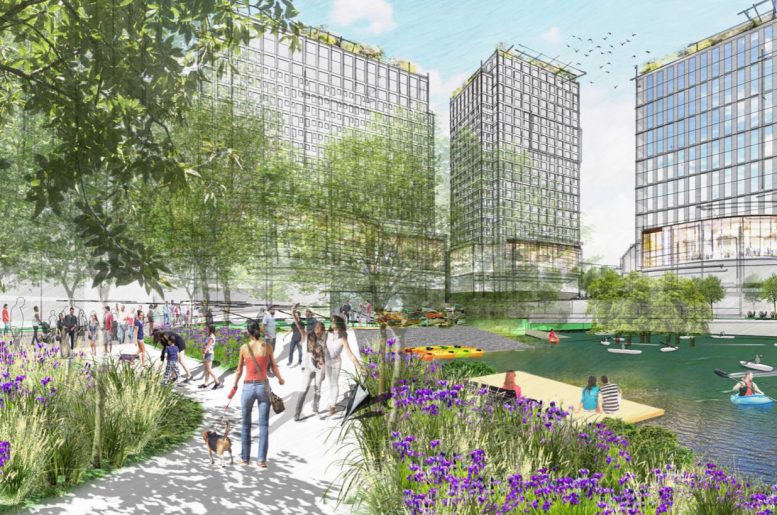 A $3.5 billion initiative to reshape and redevelop an industrial wasteland on the Eastern edge of The Bronx has reached the final stages of negotiations, and could soon begin construction. Known formally as Fordham Landing, the property is located between the Harlem River and the Major Deegan Expressway, immediately adjacent to the University Heights Bridge.

Preliminary renderings were scooped by Lois Weiss of the New York Post earlier this week, to reveal several high-rise towers, an aquatic recreation space, and a public esplanade. Dynamic Star, the development team behind the propose project, has tapped design architects NADAAA and Perkins Eastman.

Pending approvals, the development could yield a whopping 5 million square feet, including office space, a mix of affordable and market rate apartments, a new hotel and conference center, community spaces, and 12 acres of open spaces.

The only specified portions of the proposed project so far include a 700,000-square-foot “Life Sciences Center” and associated office space. Residential area will reportedly include a total of 2,800 apartments, with approximately 30 percent to be let as affordable homes.

17 Comments on "Final Negotiations Begin for $3.5 Billion Redevelopment at Fordham Landing, in The Bronx"

Permits Filed for 2136 Matthews Avenue in Pelham Parkway, The Bronx