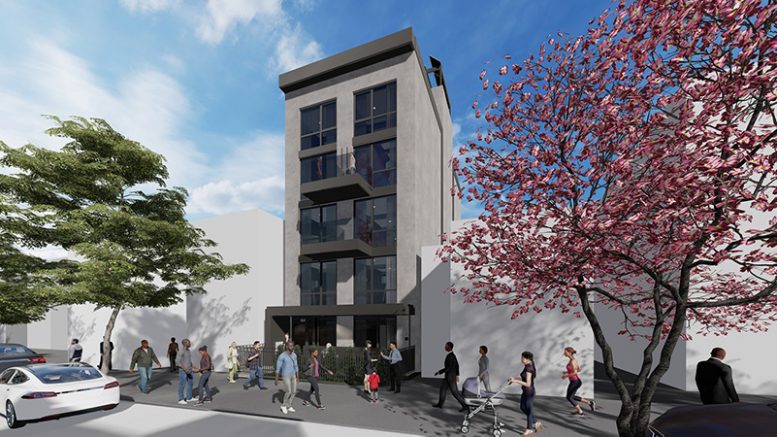 A new four-story apartment building in the Charlotte Gardens section of the South Bronx may soon break ground following the release of architectural renderings from the project team. The development is located at 1432 Vyse Avenue and will eventually comprise 6,128 square feet of residential area.

The structure is designed by Node Architecture Engineering Consulting, also referred to as NODE AEC. Jakov Saric, principal partner and executive officer, is credited as the owner on permit applications under the 1432 Vyse Avenue LLC.

The building will top out at four and a half stories and is expected to yield ten market-rate apartments as well as a modest assortment of amenity spaces. These include bicycle storage, an indoor recreational room, and an open-air communal roof deck with outdoor kitchen spaces. The assortment of apartments will include studios, micro-units, and one-bedroom configurations, in addition to a single duplex on the ground floor with exclusive access to a rear garden.

The rendering shows a light-colored cementitious curtain wall with dark gray touches at the roof and around the floor-to-ceiling windows. There will also be two cantilevering private balconies that overlook Vyse Avenue and the rear yard.

To improve the building’s air quality and energy performance, each unit will be heated and cooled with energy-efficient ventilation systems that continuously supply filtered air to units. The roof of the structure is also outfitted with solar panels and a “blue roof” water retention system that will temporarily store and slowly release rainwater over time. The latter both mitigates the amount of water runoff and acts as a passive cooling system during the summer months. The structure will include triple-glazed window walls and a specially insulated concrete enclosure.