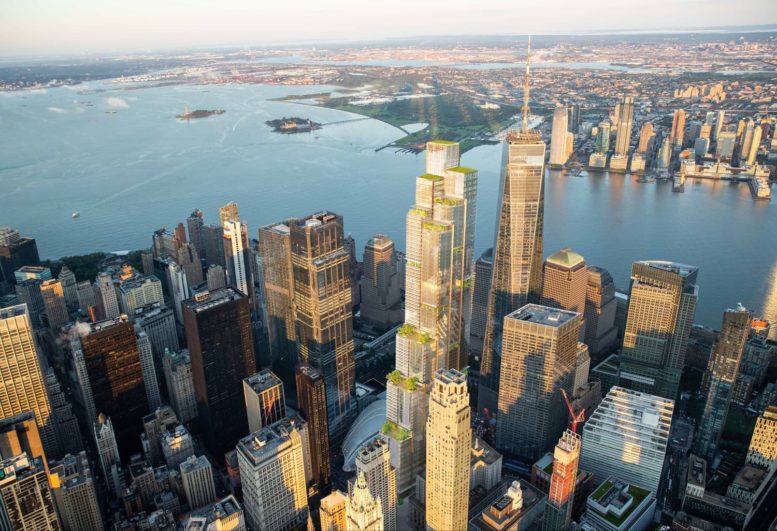 New renderings have been spotted for Two World Trade Center, the final component of the 16-acre World Trade Center complex at 200 Greenwich Street in the Financial District. Designed by Norman Foster of Foster + Partners and developed by Silverstein Properties, the commercial supertall will rise from a foundation built in the early 2010s before work stalled on the initial iteration of the tower. The full-block parcel is bound by Greenwich Street to the west, Vesey Street to the north, Church Street to the east, and Fulton Street to the south. The site is currently being used as a secondary entrance to the PATH trains and subway lines and the Westfield World Trade Center mall within Santiago Calatrava Architects‘ Oculus, and an outdoor beer garden along Church Street surrounded by colorful commissioned murals on the corrugated metal and exposed ventilation ducts.

Detailed renderings show the tower clad in floor-to-ceiling glass with horizontal metal strips between each floor, and a multitude of landscaped setbacks across the height of the eastern elevation facing Church Street and St. Paul’s Chapel. The crown culminates with four offset roof parapets shown as green roofs with the highest point estimated to rise around the 1,350-foot-tall mark. An exact floor count has yet to be formally announced, though YIMBY puts it at 88 stories tall. 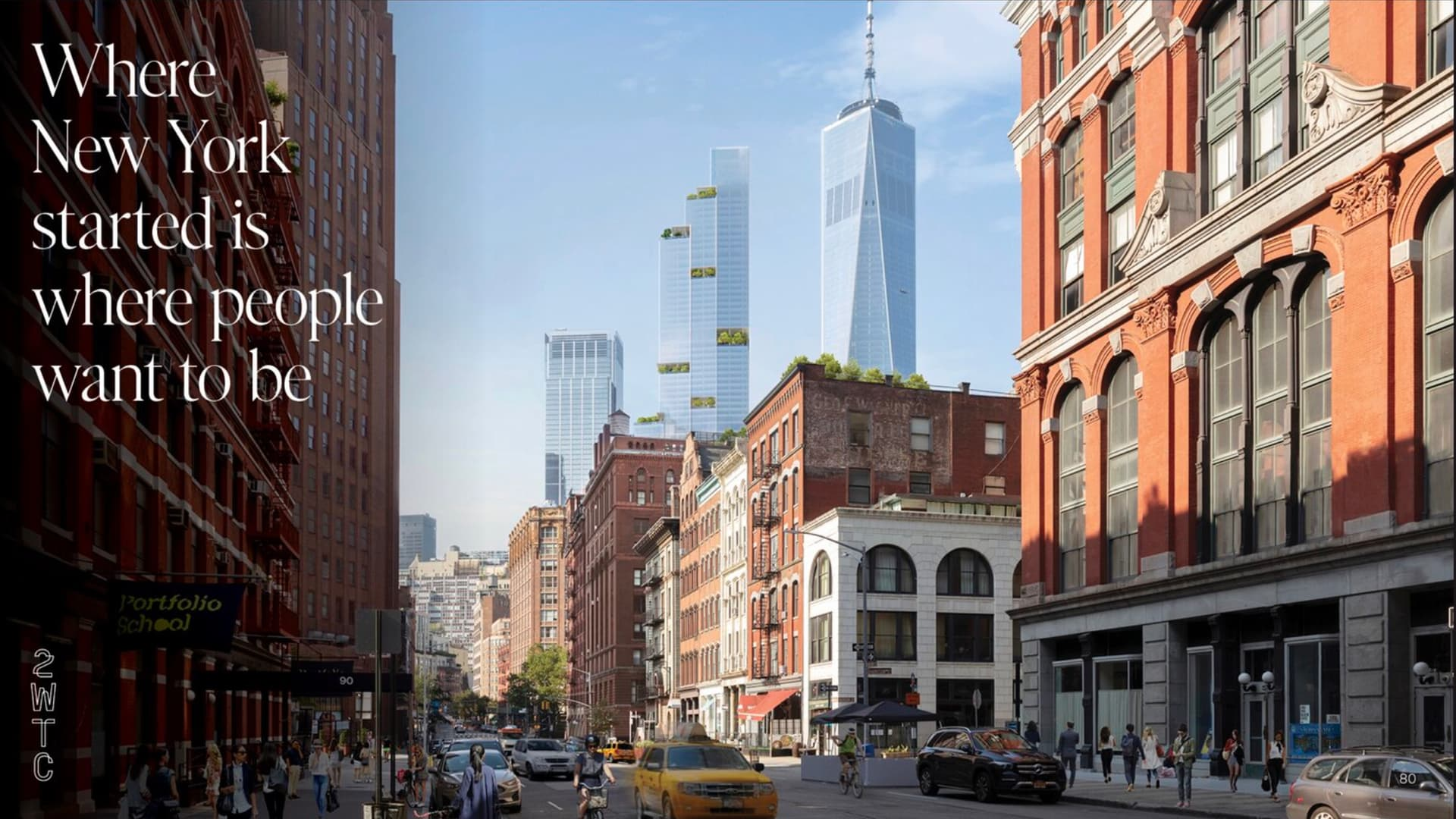 Further inspection gives the impression that the ground-floor footprint of Two World Trade Center will likely remain unchanged. This wasn’t the case with Bjarke Ingels Group‘s design from 2015, which would have needed a reconfiguration of the steel columns and most likely the core. Unlike that stepped-block design, most of the outdoor spaces in the new iteration are broken up into smaller sections, especially around the upper levels. 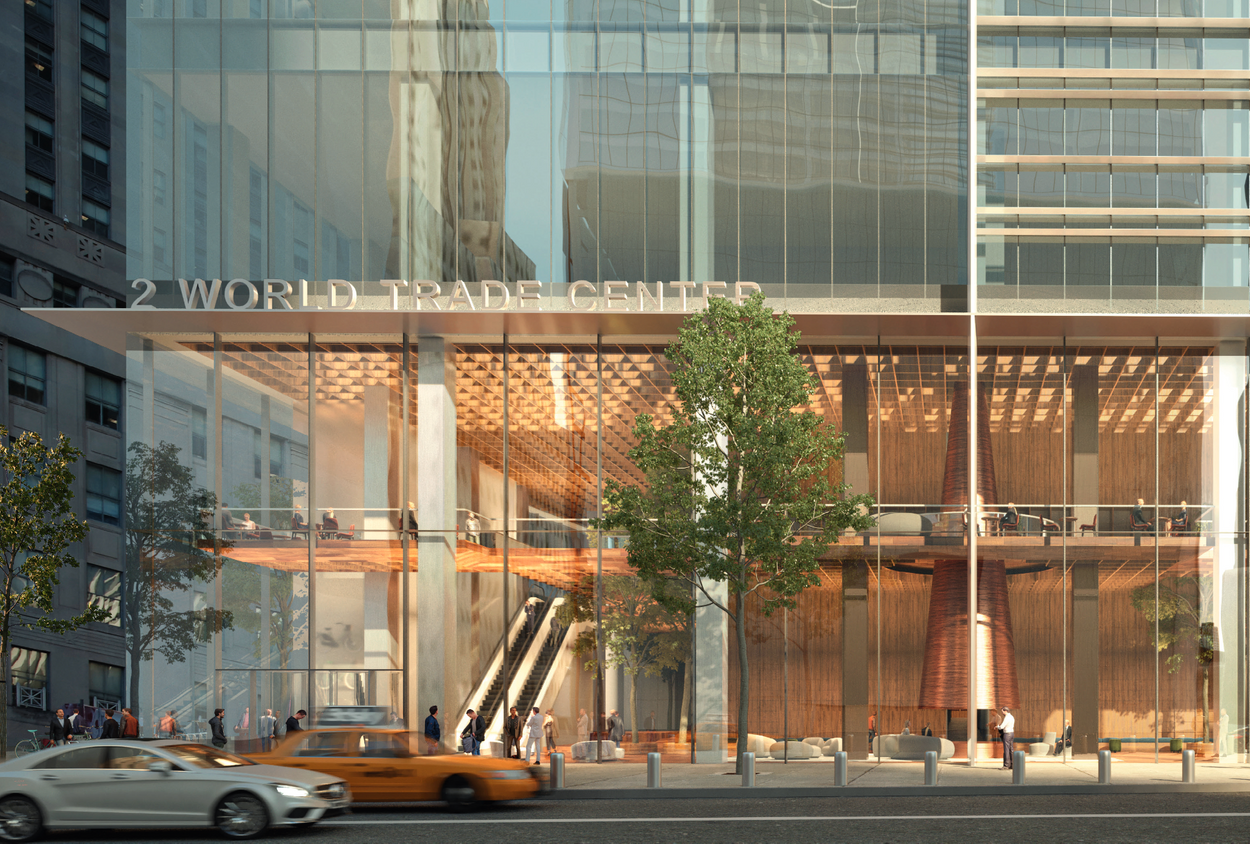 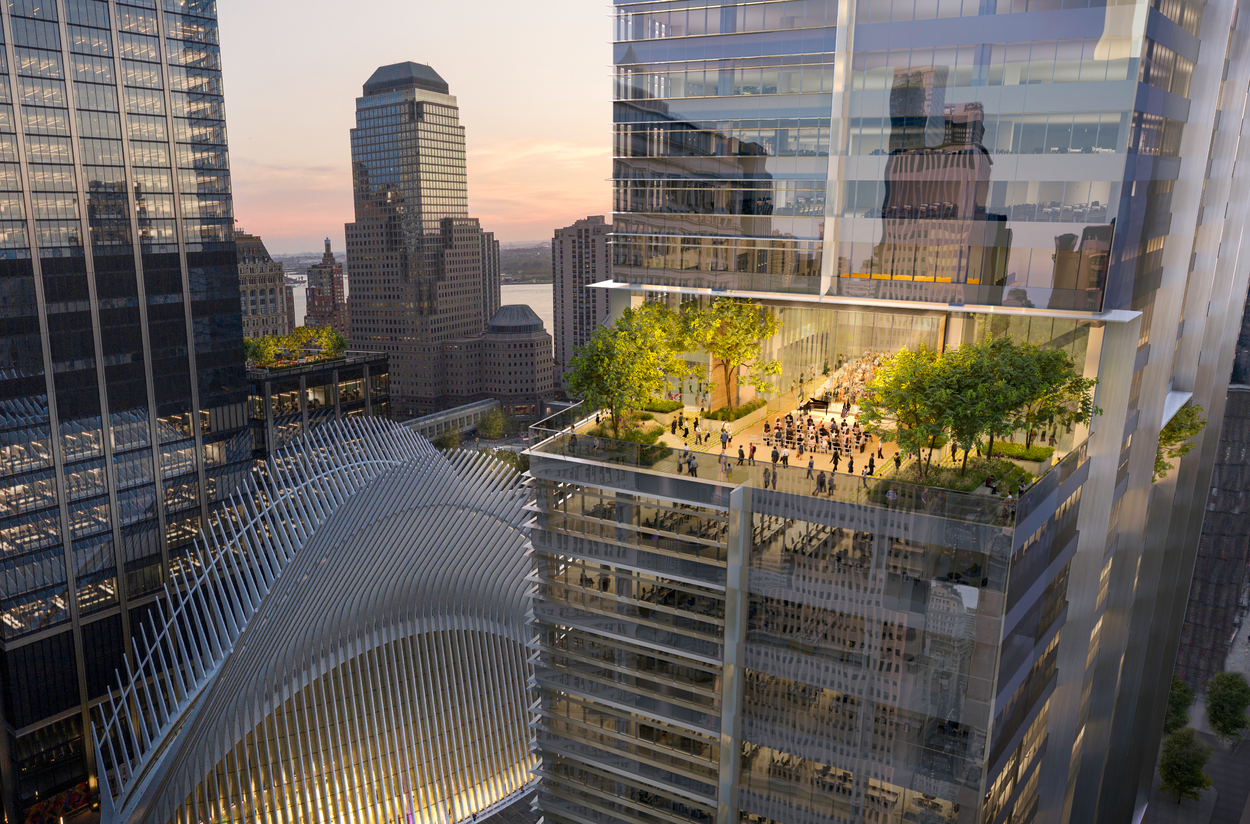 The most interesting architectural feature is the pocketed landscaped terraces positioned across all four sides of the skyscraper. These would likely be part of the office amenities for tenants and provide views of the 9/11 Memorial, the Oculus, the Ronald O. Perelman Performing Arts Center, Liberty Park with St. Nicholas Greek Orthodox Church, and the four other office towers. Another noteworthy detail in the façade is the series of vertical bands that run the height of the structure and delineate the various sections of the massing. These metal strips serve to break up the monolithic appearance of the tower’s longer sides and emphasize its verticality, much like the gray aluminum panels on the late Richard Rogers‘ Three World Trade Center to the south. 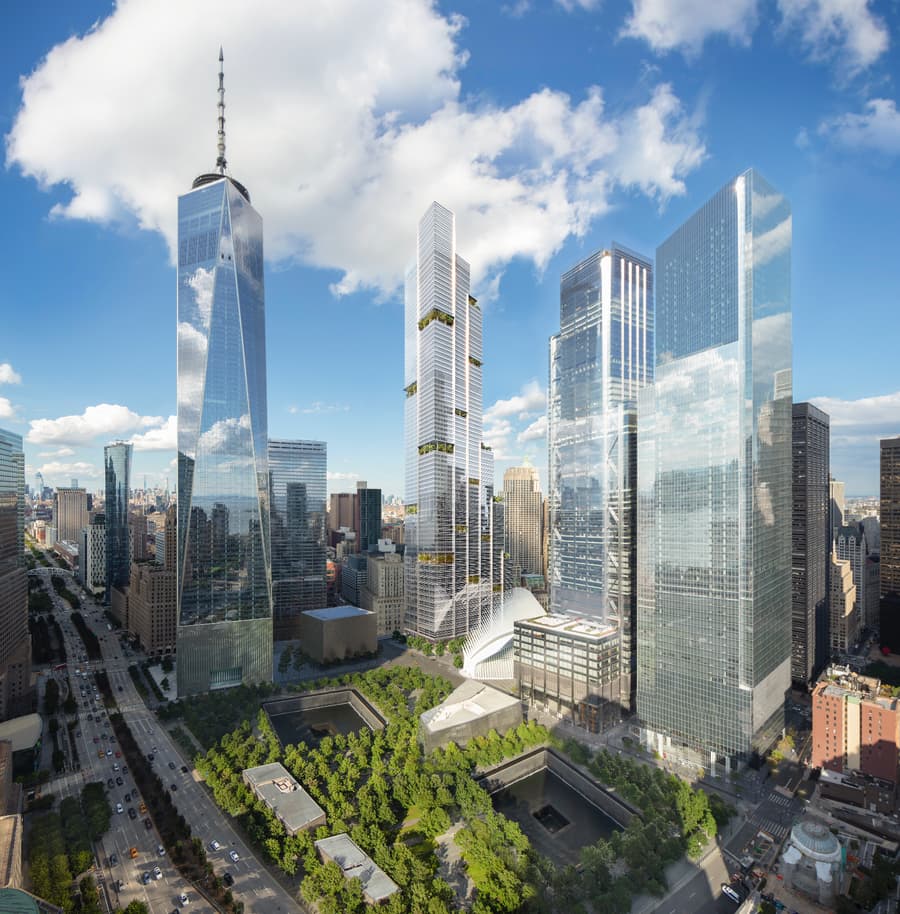 No details have been announced regarding a start or completion date for Two World Trade Center. 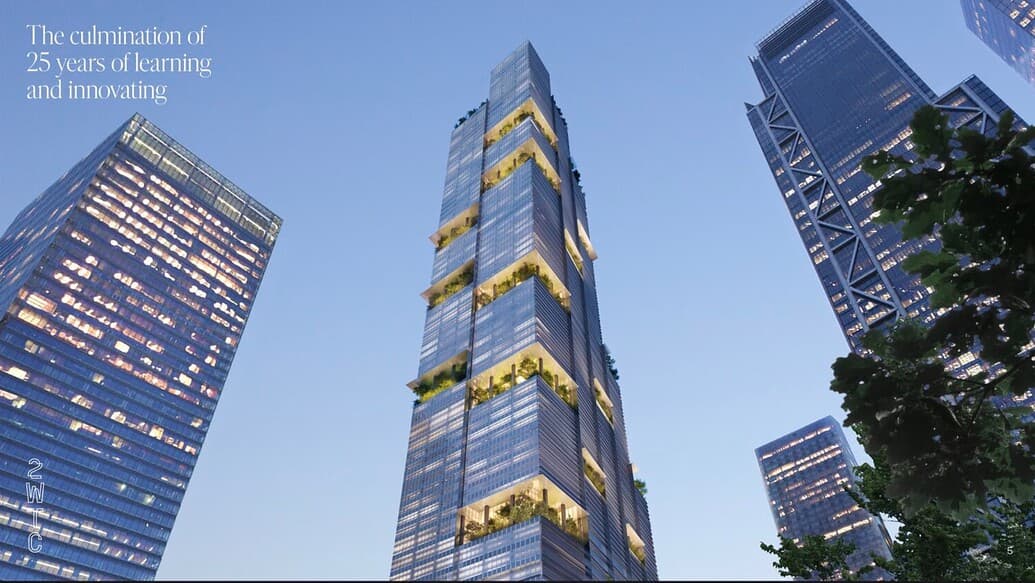 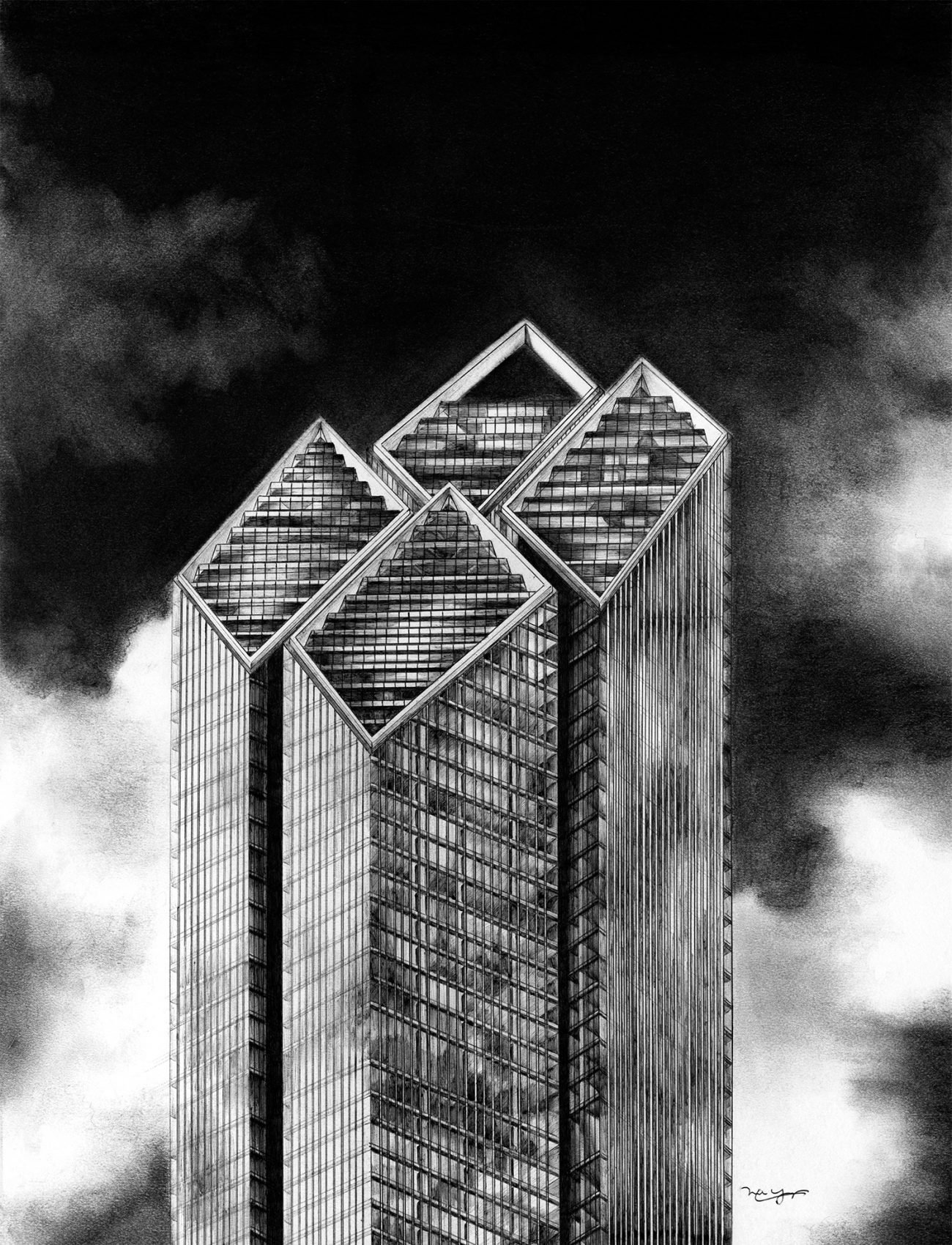 We hope to see progress begin as soon as possible and optimistically conclude in the latter half of this decade, thus bringing long-awaited closure to the rebuilding effort of this sacred Lower Manhattan site.